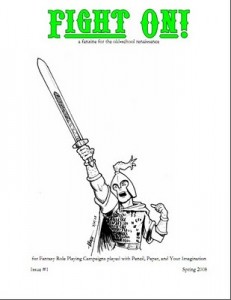 Explore the ruins of an ancient monastery. Delve in to the depths of the burial vaults of a decadent city-state. Journey to a corrupt nature node to make it pure once again.
I’m got a stack of Fight On! magazines on my desk, each with a couple of adventures in it. Rather than review the magazine, or review the adventurers in the magazine, I’m going to review all of the adventures in each issue, naming my favorite in the subject line. I don’t know how this is going to work, so comments are welcome. The magazine proper is full of great articles that remind me of the very early Dragon magazine and Strategic Review articles. Defiantly worth picking up if you want some fresh content.

The Ruined Monastery
by James Maliszewski
1st Level
This is a small 14 room dungeon that describes the first level of a complex under a ruined monastery that could be expanded upon by the DM. The map design is relatively simple and would be familiar to players of 3/3.5. The map is small and the wandering monsters rather straight forward for first level: goblins, wolf, skeletons, spiders, slime, and rats. Not much interesting there, other than all of the classic bases are covered. The 14 encounters are spread out over 5 pages, including the map. Thus the writing and descriptions are rather verbose in a round-about way that I don’t prefer. Essentially each rooms original purpose is described. This writing style, not uncommon, sets me on edge. I don’t need a description of what a vestry is, or what could be found in a vestry. I want to know what’s unusual about the vestry. Eventually the room descriptions get around to that point however even then it’s in a round-about manner. The actual encounters are not too imaginative: a scriptorium with yellow mold, a larder with spiders, etc. The weird and wooly world of the idiosyncratic is not present in this adventure. It’s clearly a tribute to Gygax; it’s a shame it’s not a very good one. Overall it’s a serviceable little adventure that’s primary sin is the Vanilla nature.

The Tomb-Complex of Ymmu M’Kursa
by Gabor Lux
4th level? 5th? “Old school mixed” is probably a better level designator
This is a pretty sweet little dungeon adventure. These are the burial vaults of the decadent city-state mentioned in the teaser and they do a good job delivering. There are only 15 keyed entires on the map, although several have (a) and (b) parts to the rooms. The adventure is spread out over four pages so it has that compactness and terseness that I appreciate. The wandering monster table is full of of the usual suspects of undead, from skeletons to shadows and mummies and include an entry or two for generating mixed groups or one of the tombs ‘named’ undead leading a group of 1d2+1 groups against the party if they sloppy/noisy! Ouch! I believe that’s the first time I’ve seen that on a wandering monster table and I like it! The map of the tomb is sufficiently complex to lead to some fun escapades as the party uses corridors to get behind behind or get ambushed by monster doing the same. I counted five loops in the map some of which intersect with each other. The encounters are all wonderfully bizarre and idiosyncratic.  For example, at one point the party encounter a group of statues who’s heads have been decapitated. If the party repairs one then the statue speaks: “We are the men of Konoth, and such is out thanks.” Save vs wands or be decapitated by an invisible sword. A W E S O M E ! That’s the kind of mysterious and strange D&D that I want to play! There are also animated mummy wrappings, cool little unique magic items like “The burial shroud of Ymmu M’Kursa” or “Ymmu’s paw”. Or maybe the potion that turns bodies of bodies of water in to glass from the waist down? How can you not love stuff like that? It boggles the mind how published high fantasy modules can survive when stuff like this is floating around. Plus, there’s an amazon woman in carbonite with a laser pistol and laser sword. It’s a deadly little tomb but it is going to give the party the feel of exploring a tomb more so than almost any other adventure published. Highly recommended!

Nature’s Nasty Node
by Makofan
Levels 4-7
This is a short 12 room adventure through a set of caves near a collapsed tower. A magical nature node has been corrupted and the party needs to purify it again. The map has a little variety near the beginning however it quickly turns in to a linear map after the first 5 or 6 rooms. The nature of the adventure, a magical nature node, immediately gives it a bit more flavor than the standard dungeon dressing of The Ruined Monastery, however in the end it’s really just about the same in content, although it manages to do it in only three pages. Like the first adventure this one is quite serviceable but doesn’t really distinguish itself much. It does feature pixies and a basilisk, both solid Mystic Wood type creatures. This and a few other touch contribute a lot to it’s more mystical feel. There’s also a short little set of tables in the back, a tribute to Bob Bledsaw, which you can use to generate your own Nature Node adventure. Roll a boss, a fantastic monster, a normal monster, a setting, normal treasure, fantastic treasure, guarded treasure, what’s being wielded, and the hook agent and you’ve got yourself a customized adventure! If you assume the point of the dungeon is to show how the table can be used then you’ve got much better  possibilities, but then it wouldn’t be an adventure and I wouldn’t be reviewing it.