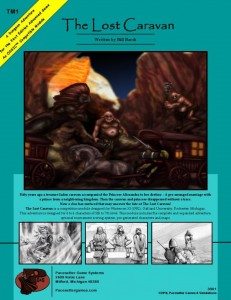 Fifty years ago a treasure-laden caravan accompanied the Princess Allisandra to her destiny – A pre-arranged marriage with a prince from a neighboring kingdom. Then the caravan and princess disappeared without a trace. Now a clue has surfaced that may uncover the fate of The Lost Caravan.

This is a two-part tournament module originally created for MDG’s Wintercon in 1982. Tournament modules have a reputation for being rather linear, a requirement for scoring different parties, however this one is more open than a lot of non-tournament modules I’ve seen. There is a heavy tactical element to the scoring.

The setup here is better than most: An aged and dying King summons the party to him. Fifty years ago his daughter disappeared while on her way to her pre-arranged wedding. A clue recently emerged, the first to ever do so, and he’d like the party to look in to it before he dies … which will be quite soon. Not earth shattering stuff but a decent enough hook. There are supposed to be two paths for the party to then take: attempting to track the caravan or following up on the clue which turns out to be a bit of a family tree exploration: Track down Bobs sister, ask about their father, go visit with his friends, etc. Because the clue is directly related to this second option its pretty certain the party will do that first and then go track down the caravan from there. Both parts have to be completed however the linkage from the family tree clue to the caravan is not the strongest. I’d perhaps drop a clue or two more in there. Both paths have an NPC encounter in which points can be earned, and both have some pretty big set piece battles. The caravan path has an old abandoned monastery to explore, a group of giants to potentially battle, and a cave to explore that comes with another giant battle. The family-tree path has a potentially much more deadly encounter: the party is ambushed while at an inn.  The ambush is pretty good, believable, and not forced at all. And very very deadly. It’s a very large battle in a burning inn at night with a lot of 1HD opponents. The cultists that are attacking are never really explained very well however by stepping back a bit the DM can easily come up with a good reason. There are a lot of humanoids in this adventure, both in the set encounters and on the wandering tables. I usually object to that however not this time, for reasons I’ll explain at the end. Both plot lines seem very combat heavy however the NPC and exploration elements are very well done, especially in the cave plot line. It’s got a lot to love: the abandoned monastery has some nice little exploration pieces, there’s a crotchety old NPC for the party to interact with, and lots of things to get the party in to trouble. The family-tree plot is more straightforward in its NPC interactions … so much so that I didn’t get a lot of flavor from them. The inn attack however is a VERY good set piece. Played correctly its hard to imagine the PCs escaping without some major damage. This leads once again to the problem of the caravan vs/ family tree plot. The caravan plot taking place first make the inn an excellent place to end the first part of the adventure. A little more work to strengthen ‘tracking the caravan’ in the introduction would be a good way to get the party there first while still preserving their ability to choose.

The second part has the party journeying to where they believe the princess is and brining her back to see the dying king. There are five of six encounters that all will take place in a pretty much linear format. This part is essentially a test of the parties ability to stay on task. As they traverse a LARGE mountain lake system they are confronted with an island each night that they can & should camp on. Each of the four islands has some kind of encounter on it. Each encounter has NOTHING to do with finding the princess and bringing her back. It’s just one BIG RED SHINY SHINY BUTTON every night. The islands involve a bunch of giant monsters straight out of those bad 70’s ‘giant vermin’ movies, a hermit who wants to be left alone, a group of dwarves after some buried treasure, and a strange obelisk. They all have a nicely distinct flavor to them and they will ALL lead to the party screwing themselves over. Stay on Target. Stay on Target! The adventure ends with the party finding the princess in her fortress and a set piece attack from a group of giants on her outpost. This is another LARGE battle with lots of troops involved. This second section is … strange. A smart party will avoid the islands … but a meta-think party will know they can pick up some points on the islands. Avoiding the island encounters basically means that there is just one large battle on this part of the adventure; not too exciting. This is a little akin to finding a pouch of 100gp in the first room on your first adventure and then going back home to live in peasant splendor the rest of your life: realistic but boring. A non-tourney party won’t be point-whoring and should have an excellent time roleplaying with the hermit and helping the dwarves find their treasure.

The designer suggests, and I agree, that this would be a pretty good lead in to the G1/G2/G3 series of modules. It features giants and humanoids and raiding by both the monsters and the humans. It’s a little weak on the weird magic and fungus men front, however it is an excellent tourney module.

1 Response to TM1 – The Lost Caravan