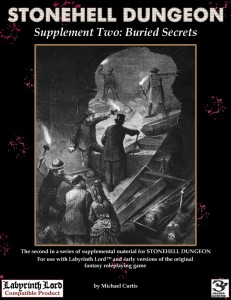 Explore “Modnar’s Cellar,” the undercroft of a ruined tower owned by a magic-user with a strange agenda. Visit “The Nest of Otrogg,” a cave system once occupied by a loathsome cult. Discover the secrets of  “The Sanctuary of Chthonia,” a secret sub-level located inside Stonehell Dungeon and overseen by an undead witch.

This is a nice little Stonehell supplement that collects three separate expansion areas. They can be used without Stonehell although together they serve to really fill out the Sandbox.

The three small areas presented in this product do a good job of providing some sublevel environments to a dungeon. The first two are areas outside of Stonhell dungeon while the third is meant to be a true sublevel to the dungeon. Modnar’s Cellar is the basement on an old wizards tower that blew up. The map feels rather small with 31 or so encounters on it. The design is roughly that of two or three looping corridors around the central entrance with some branches off of it. There’s lots of secret doors, and doors for that matter, however I just can’t shake the feeling that the map is smaller and/or simpler than the ones in Stonehell. The wandering monster table has about 10 entries of mostly vermin and oozes, but including bugbears and kobolds. The humanoids seem thrown-in on this one. I would probably replace them with bandits. This keeps the shock impact of humanoids in Stonehell high and also provides for a bit of a transition from the mundane world to the that of the fantastic. The actual room encounters in the cellar are great. Each one is about two or three sentences and they all provide some kind of interesting place for the party to explore. There are lots of rooms with nothing too fantastic in them that are otherwise interesting. A bucket on a pole, mounds of humanoid bones, and so on. SOme will contain treasure if the party is creative; like looting a partially constructed summoning circle. Quite a few rooms have something MUCH more interesting. A statue that will recharge a wand, or a well that can let you reroll a stat, once. The entire cellar is full of these sorts of idiosyncratic things. This is exactly what I’m looking for in a module: non-standard things for the party to hang themselves with. And unlike Stonehell the monster names are bolded in each entry allowing the DM to pick out the creature easily. The humanoids in the dungeon (bugbears and kobolds) feel out of place to me however that’s hard to argue considering the number of humanoids in Stonehell proper. If I had never seen Stonehell then I’d be pleased with the encounters but slightly disappointed in the map, although it is quite a bit better than most.

The Nest of Otrogg expands on an area near the entrance of the dungeon. This is supposed to be the forgotten temple of a vermin god. The caverns have about 17 keyed encounters and the map is simple yet contain several loops. The wandering monsters are pretty perfect: vermin & ooze! The temple caverns are described as a Nest … but I’m not sure I got that feeling in reading. Certainly many of the rooms have some flavor text with the words ‘moss’, ‘damp’ or ‘fungus’ in them, and the introduction recommends that there be an abnormal amount of harmless bugs present, that get in to everything, but I just didn’t feel the vibe. It could be that it plays a lot better. Hmmm, maybe the hallways/tunnels/corridors are what’s killing the atmosphere for me? Anyway, there’s a lot of interesting things to explore in the caves and get freaked out by.  It’s less “wizard weird” and more “fungus weird.”

The final area is a true sublevel to Stonhell and is presented in the same fashion as the dungeon encounters are in the core dungeon book. This means a two page introduction and then a map, notes, wandering monsters, and key description appearing on two more pages. This is a great format and works well. The map is not too complex, really just 16 encounter areas in a simple layout. The entire place has an empty feel to it; much like exploring an old decrepit house would. The interactions with the environment is mostly going to be through mundane things, like looking in teapots and so forth. The central concept of the NPC’s on this level is very good and this level could perhaps serve as a hidey hole for parties exploring the dungeon.

This provides some interesting areas to expand on the environs around and in Stonhell and the first two mini-dungeons are excellent example of incorporating idiosyncratic and weird in to a dungeon. There’s a real old school feel to those encounters and rooms. This is better than 90% of the product produced, so you shouldn’t have any problems justifying adding it to your collection given the price.