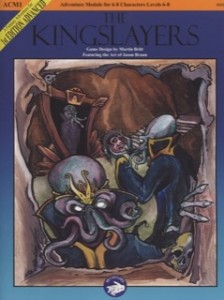 This module revolves around the retrieval of 2 powerful magical daggers, called the Kingslayers, and then the attempt to destroy them. The daggers are intelligent magical items and don’t want to be destroyed. This little twist, so obvious from LOTR, actually surprised me a little. While the 1E DMG has some suggestions on artifact destruction I don’t recall ever seeing an adventure that focused on that aspect. But, Old Dude is old, so maybe I just can’t recall any.

Ages ago the Mind Flayers created a little set of paired daggers called The Kingslayers. The daggers were forged to sow destruction in the above-ground lands by enabling/compelling the death of kings & rulers. In the ensuing chaos the Mind Flayers would keep the upper lands off balance until they could see their conquest plans to fruition. The daggers were successful in what they did, and many a ruler fell to them. Finally, hey were captured and placed in a valley, guarded by a group of elves. And thus the danger passed. Until, of course, the contact was lost with the elves. The Mind Flayers have regained the daggers and are preparing to set about their dastardly deeds again. In the first part of the adventure the party is sent through the underdark to retrieve the daggers, while in the second part they are sent to the plane of Limbo to destroy the daggers.

The first part of the adventure is relatively straight forwards. After surviving an ambush by an NPC party at an inn, the group will head through the Great Marsh, which is really just a set of wandering monster checks, 24 in all, in order to encounter the six groups on the wandering table. The most interesting are a Faerie Dragon and a pack of Vargouille. After trekking through the swap the party gets to an entrance to the underdark and sets off via boat. There’s a drow checkpoint which is an excellent opportunity for roleplaying, as well as a waterborne encounter with some cave fishers. Finally reaching dry land, the party navigates around a purple worm and in to an old dwarves outpost/dungeon now inhabited by Derro and their two Mind Flayer masters. It’s a pretty short affair, with only about 15 rooms. The Mind Flayers will be launching hit & run raids on the party with their psionic abilites, but eventually the party should kill them off and recover the daggers. The ambush at the inn is interesting because it’s with another NPC party; I’ve always been intrigued by those charts in the 1E DMG on NPC party creation. The cave fisher encounter is another nice one, and should prevent some interesting challenges to the PC as they party members are reeled up towards the ceiling. Finally, full 1E psionic Mind Flayers, with their servants, should prove a new & interesting foe for PC’s which haven’t encountered that type of thing before.

The second part of the adventure involves a trip through the astral plane to Limbo in order to unmake the daggers. As such you’ll need the Manual of Planes in order to get the full use out of this section of the adventure. You could wing it without it, however the spell changes and other different effects are part of the fun of an adventure on the planes, so I’d recommend using it. The party and their Githzerai guides are ambushed in the astral plane by a group of Githyanki right before traveling to Limbo. Once in Limbo they should be at the fortress which they need to explore to destroy the daggers. The keep has three levels, but, being on Limbo, it’s entirely random. We get a set of tables describing corridors and rooms, and what shows up on the other side when a door is opened. It’s entirely random, except for one encounter set encounter on each level, which is placed on the random table (a 12 on 2d6.) Otherwise it’s random rooms & corridors. On level1 all of the inhabited rooms are full of dark creepers. On Level 2 it’s Gambados, Gorbels, and Gibbering Mouthers. Level 3 has Gibberlings. On each level the party will wander about, encountering creatures, until they find a stir to the next level or the Special Encounter for that level. The special encounter will have an item that the party needs to unmake the daggers. Once all three are collected then the party can use the forge, in the third levels special encounter, to unmake the daggers. There are a couple of Slaad involved, as well as a couple of new monsters and new magical items.

I mentioned above that the daggers are intelligent and don’t want to be unmade. There are a couple of sections in the module where advice is given to the referee on how to play the daggers. They are probably powerful enough to dominate anyone who picks them up/uses them, and while being unmade they are powerful enough to influence chaotic characters in the same room. I enjoyed this aspect of the adventure. I suspect that not enough attention is really payed to our intelligent/ego friends. It certainly adds a unique aspect to the objects which goes a long way towards making each magic item unique & wonderful in it’s own way. Otherwise this is a really a two-part adventure. The first is a straight forward little adventure with a a couple of tough psionic Mind Flayers at the end. The second is a slog through a random keep on another plane, with all that both of those imply.