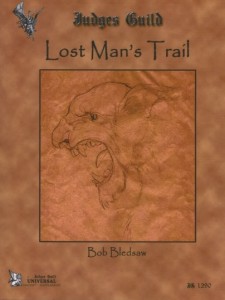 The trail east from Modron to the Coast, known as Lost Man’s Trail, has been a source of mystery for some time. Adventurers have a habit of disappearing from the trail. Are they lured away by some enticement, or waylayed by the legendary Skandik Raiders? The only safe place to stay, The Fat Deer Inn, offers good ale, soft bedding, and an assortment of characters; each having their own reason for being there.

Four more hexes for the Wilderlands. Encounters are limited to four or five major ones rather than the hex crawl sentences. A fine example of a regional sandbox building block.

I generally don’t review regional settings. Or rather, I review everything I purchase and I don’t generally purchase regional settings, so this one is going to be short. I stumbled upon Lost Man’s Trail because it was Bob “Judge’s Guild” Bledsaw’s last work prior to his passing. There are maps for four more Wilderlands hexes; this time between Modron and Tegal. The hexes feature a trail from Modron to the Fat Deer Inn. All of the encounters provided take place in this last hex. Essentially, the inn is a base for the characters while they explore some of the juicy rumors they hear there. The inn takes up about 1/4 of the pages in the book and is described enough to provide some good play. What I mean by this is that each room is described, however the primary descriptions of the various rooms tend to be the occupants and what they are doing at the inn and how they react to the players and so on. What this gets you is a rich set of people interacting with the party, an absolute necessity for any type of social portion of the game. They have relationships to each other and their own motivations outside of the party. That’s what is going to bring the inn alive and make it a memorable place.

There are about four different sets of bandits roaming the hex with the inn, along with a potentially friendly encounter with a hermit and a small/simple four-level cave system. The bandits are all very different, even though one set is humanoids (ug!) One of the sets of bandits could be called the focus of the adventure, and their defeat probably leads the mini-dungeon and it’s 20 or so rooms/encounters. It’s full of what one expect from a Judge’s Guild product: great atmosphere. Cages made from human/animal hair, great item/jewelry/magic item descriptions, non-standard magic items, and freaky non-standard creatures. This is exactly the sort of detail I’m looking for. I don’t want orcs, I want weird fungus pumpkins that waddle along the floor, or giants slugs that secret strange gasses. That’s the sort of personalized, idiosyncratic whimsy that I’m looking for in a module.