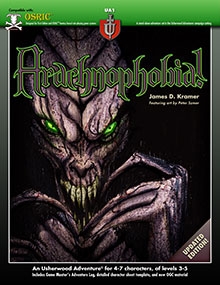 In recent months, creatures dark and wicked have plagued the countryside. The insect-men (as the locals named them) have created no end of anarchy and fear among the populace. After many dark days, the Abbot Christoph sent no further word regarding his battle against the foul creatures in the monastery of the Caelian monks. What is the fate of the monks? And what is the nature of the creatures that roam freely below the catacombs of the monastery, the keep, and the village? Only a foray into the dark depths of the earth will tell truly…

This modules is the most evocative & creepy I’ve seen in a long while. It’s a very well done story and could be lifted and inserted in to almost ANY role-playing game or era, from future to modern to fantasy.

I have a confession to make: fantasy is not my true love. For all of my talk about whimsical and fantastic locations I am more drawn to the hard edge of great SciFi, especially in literature. In the RPG realm I truly love Gamma World and Metamorphosis Alpha. My favorite module is The Legion of Gold and I will run it over and over and over again and be just as giddy the latest time as I was the first. Among my favorite moments in that module is yelling “Buggems, No! BUGGEMS! NO!” My eyes are watering even now while I think about it. This module has much the same appeal to me that the Buggems plot in Legion of Gold has, but Arachnophobia! amps up the tension by at least an order of magnitude, if not more. It’s the best Aliens homage I’ve seen and manages to evoke that same feeling of dread and claustrophobia of the Aliens movie. It’s very well done, very evocative, and has that excellent layout that I’ve come to expect and admire about the Usherwood modules.

All of the Usherwood modules seem to have a very brief introduction and this module is no exception. There’s no 18 pages of irrelevant backstory to wade through prior to getting in to the adventure. There’s a brief paragraph that describes how to incorporate this module in to your campaign. This is essentially advice on the campaign specific elements of the module: what god names you may need to change and important geographic features for the setting. The three primary location are also described in two or three sentences so the DM has a good overview of the village, abbey, and keep. We’re treated to a brief section on scaling the adventure for higher and lower level groups and a small rumor table that the DM can work in on the journey to the location. And let me take this opportunity to say OH. MY. PELOR! Throwing this adventure at a group of 1st level characters, scaled down of course, would probably make an EXCELLENT kick off game for a campaign. I just would make sure the players are not sitting on any white chairs and that you have a steam cleaner and a change of pants ready for when they, uh … have accidents.

There is about one page of information about the village, and the information the party can find out there. As with most Kramer work the text is brief, clear, and to the point. There is quite a bit of information conveyed in that one page and it manages to invoke a certain atmosphere of dread and foreboding. FOr example, as the party approaches the village they see a plume of black smoke rising from it, and soon catch the whiff of charred flesh. They come upon a bonfire in the village with several charred and blackened corpses burning in it of strange creatures, as they catch site of a patrol from the keep riding away, and a forlorn populace looking on. Ok, I made up the ‘forlorn’ part, the author just mentions the villagers looking on, but while the designer never mentions that’s their attitude the overall feeling of the scene is one that inspires you have forlorn villagers, resigned to their fate. That folks is an example of evocative writing style; it helps me imagine the scene within my own mind and work in new elements. The text is brief but help the DM imagine what is going on so they can fill in the details. That’s EXACTLY what I’m looking for in a module: a kick start to my own imagination. There are other several other example of this in the page of village detail. The module paints a scene of despair and horror without itself being prurient. Beyond ‘solving the problem’ there are half a dozen or so other goals that the DM could work in, all in the realm of ‘fetch quests’. Someone in the village wants something from the monastery and asks the party for help. AGain these are brief, a sentence, and again they are done very well. There’s just enough detail for the DM to work it in to their version of the village without forcing anything down their throats.

The designer knows how to design a truly great map. The den of the monsters has at least five different entrances while the abbey has about another four or five. This gives the players a degree of freedom that is not present in simpler maps. They can watch the grounds, find a sneakier entrance, barricade others, or set traps. It’s really just a locale that the adventure takes place in. I realize that sounds silly to say because that’s what all site-based adventures are, however in this case we have a more realistic version of locale that allows for many more player options. It’s similar to the map design in the original Far Cry or the new Deus Ex video games. You have goal and an open-ended map, how you choose to accomplish your goal is up to you. This can become overly complex in certain circumstances, however in this module the five or so varying entrances to two sites serves to gives the players options while controlling the massive open-endedness problems that a DM might have if more options were present. The interior maps of the abbey and the den are not terribly exciting in terms of a looping design however they have other things going them. The abbey in particular has several interesting map features, especially with regard to entrance/exit options in the areas that are certain to contain the most drama. There are excellent wandering monster tables for both the abbey and the den. They feature a variety of vermin such as rats, spiders, and rot grubs, as well as the new featured monsters of the adventure. The table has a brief note next to many of the entries with detail about the encounter. For example “place a body here” or “webs from floor to ceiling.” Monster stats are included in a footnote-like fashion to the table. The stat block is about one of maybe two lines long, just enough to give the DM what they need. The footnote fashion allows the table to be clean and yet gives you all the stats near the table. Note these are TABLE footnotes, not PAGE footnotes. They make a lot of sense.

On to the encounters proper. There are about 34 locations within the abbey and den. The encounter text is more verbose than I usually like to see; terse and clear encounters are generally a feature in Usherwood modules and thus I was surprised to see things a little more verbose in this module. Generally an Usherwood module will have eight or so rooms to a page and this module has maybe four to a page. The reason for this, I’m sure, is the heavily evocative atmosphere that is being painted. The vast majority of the abbey is a charnel house. Fire has gutted a portion of it. There are bricked off sections. Rotted and decaying corpses abound, with horrific wounds and looks of fear and agony on their faces. When players open stuck doors they find a decaying arm falling through the crack. The picture painted is one of desperation and defeat. The encounters in the abbey are all with vermin, with a couple of exceptions. The one notable one is an appearance of The New Monster. This is a PERFECT tension building mechanism. The party gets glimpses of bodies in the village. They hear rumors. They see the results of the creatures in the ruined abbey and then have a brief encounter with them. Finally they are faced with descending down in to the hole in to the monsters lair. I can’t imagine that even the most die-hard gamiest would not be filled with dread and apprehension as they enter the lair. The lair has more than a few interesting and evocative encounters and much resembles the aliens lair in Aliens; full of resin walls and decaying corpses. Eggs, cows, and larvae abound. This is not an adventure for squeamish players. There are also more than a few other encounters in the lair, as well as a mechanism for accidentally, or purposefully, burning the place down. The new monsters, a kind of spider/human centaur-like beast, should freak the players out. Several varieties are provided for. They could be thought of as Driders done right, or perhaps Driders done by a horror artist.

The module also has a section of preg-gens, and the maps are done absolutely beautifully, especially the full-color ones in the PDF. There also a nice section of DM adventure log pages that can be photocopied and used, which I found very useful. The magic items tend toward the non-standard type. IE: a warhammer with a notable history, a sword with other abilities, and so on. Many of the treasures have histories attached and there are notes on how they may serve as seeds for a different adventure, or consequences of selling them. This is an excellent way to handle magic items and such treasures and I wish more designers would do so; it adds flavor to something that can otherwise kill the feel of a good game.

The encounter text is a BIT too wordy for my tastes, and there is a notable omission of details regarding what happens when/if a fire starts, otherwise this is a near perfect module. I don’t keep a lot of what I buy to review however I will certainly be keeping this one. It’s very very good.