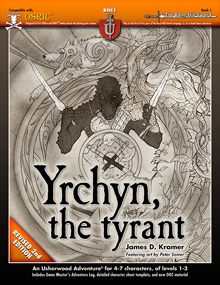 An intrepid band of adventurers enter the treacherous cavern complex of Yrchyn — the tyrannical chieftain of a tribe of blood-thirsty kobolds. Does the party have what it takes to rid the region of these lizard vermin? And what else may lie within the dark, dank caverns? And is this just the beginning of the party’s troubles?

An excellent kobold lair, this is the first module in the Bone-Hilt Sword campaign from Usherwood. It’s nicely done in an environment that resembles the almost-high-fantsy world of the early D&D modules.This module does not mess around. The introductory text is very short, to the point, and well put together. There’s a village, the party is in the village for some reason, and it has a problem for the party to solve. The backstory in the front of he module is short, and the hooks provided are barebones but makes sense. In particular I was drawn in by the rumors of kobold attacks on vital trading routes up north, along with common knowledge that the kobolds died out long ago, with confirmation from the visiting dwarves. This is all communicated in about as many sentences as I used, however the author is much clearer and somehow communicates much more detail than I ever could. These very simple hooks work together to create an environment that the DM can really flesh out in the village. The tone, tenor, and motivations, anxieties, and other emotions of the villagers is preset, which is all I need to work my own magic on the village of Usherwood and bring it to life. The village has a small map won one page with 20 locations detailed on a facing page. OMG! All the information you need next to each other! You don’t have to flip ages between the map and the descriptions! This sort of small attention to detail is present throughout the module. As with the second in the series, it is very well laid out, perhaps the best job I’ve seen. Combined with the effective but terse writing style of the author this makes for a compact product that is full of possibilities and adventure. I approve.

The regional map provided is wonderful. It reminds me a great deal of some of the gorgeous Harn maps. Like the best of maps, it causes me to wonder what’s over there in that corner, and wouldn’t it be a cool adventure if X happened over there. There’s no wandering monster table provided for the 100 mile trip to the kobold caves, or even an indication where they might be from the NPC’s. This will be up to the DM to create as the players move along. There are two wilderness encounters provided, and just like in the second modules, one is much more interesting than the other. A kobold scouting party raiding the camp at night isn’t too interesting as written, however I think it does provide a nice description of what may happen if the party retreats from the caves to rest and recover. The second, a kobold war party 65 strong, is much more interesting. A large encounter like this telegraphs it’s coming to the party and allows them to react as they wish. Ambush the war party, follow them, track them back, spy on them, etc. This is where those hare-brained PC plans are generated from, and I love it.

The cave complex map is very good. It’s spread out over two pages and is primarily a cavern system with a smaller section of worked tunnels. There are crawl spaces around the main caverns and most of the rooms are littered with murder holes. The design is a nice looping one, with lots of ways to get from location a to b, which allows the party to ambush encounters, get ambushed by kobolds from behind, and avoid/sneak past encounters. I really like these sorts of maps for the amount of freedom of play they allow. There are also several ways to get to levels two, the orc caverns detailed in the second module in the series, if the DM has the product. The multiple entrances on the second level are something I like as well, it really gives the impression of a multi-dimensional space. The cavern has a streak in it, and there are several water features and environmental effects because of it, which is nicely added variety.

This module, and the next one in the series: The Shattered Skull, remind me a great deal of the style of G1, The Steading. There are great non-railroady maps, some prisoners, and some humanoid allies the chief is hosting. The module lacks the faction element that the rebel orcs provided in G1, however it does a great job of offering up unique and interesting magic items, in contrast to G1’s rather generic feel. There are several nice traps that go above and beyond the normal traps seen in modules. There are not really any weird fantasy elements to the module however there are quite a few interesting and evocative things going on, including refuse rooms to search with giant centipedes in them. The description given for this encounter really got me going and I came up with a very interesting way to run the room, totally changing the way I’ve run these types of rooms in the past. This is EXACTLY what I’m looking for in a module; help me with my own imagination. Get it going and let me do the rest.

The tail end of the product has some pregens, a detailed listing of the NPC’s, several maps of the town, caves, regional, and so on, DM adventure record sheets, and a LONG regional history section. It’s funny, I don’t seem to mind these things when they are included as an appendix but I go apoplectic when they show up in the front of a module. You can read more about my fanboy drooling over the layout in my Shatter Skull review, and the layouts here are just as good. This is quite a deadly adventure; the kobold murder holes, manned by light crossbow wielding kobolds in spaces the party will have a hard time reaching, are going to be a real challenge to a party that barges in. There is a possibility to kill the party several times over if they don’t tae a real thoughtful attitude toward the caves. Just as it should be.

7 Responses to BHS1 – Yrchyn the tyrant