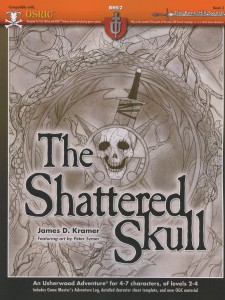 An intrepid band of adventurers enter the treacherous cavern complex of the Shattered Skull — a blood-thirsty tribe of orcs. Does the party have what it takes to ride the region of the vile humanoids? And what else may lie within the dark, dank caverns?

This is an intriguing, and refreshing, module that gets almost everything right. It could use some spicing up, but would otherwise be a great substitute for the orcs caves in the module B2.

There are elements to this module that I find very exciting and I’m intrigued with what could be done. The module is set in the same cave system as the Yrchyn kobolds, which were detailed in the first module of this series. The background and introductory information are very short, maybe a paragraph of each, along with another paragraph of hooks that the DM can work from. And yet, it all made perfect sense. The writing is clear, terse, in a decent-sized font, and communicates exactly what the DM needs to know to run the adventure. It was a very refreshing pace from the overly long backstories in many modules. The introduction, about two pages long, also contained a host of other information for the DM. A throw-away paragraph on scaling it up/down, a pointer to the website for more information on the campaign background. A brief section, maybe five sentences, of boxed text that details exactly the what and why of the adventure for the players.  It also contains two wilderness encounters for the 100 mile journey from the town to the caves, and a notes section on the bottom of each page for the DM. I found the intro, and layout style, to be absolutely a breath of fresh air in the presentation of modules. The writing was terse and yet detailed the core data & flavor needed. The ONLY boxed text in the entire module appears in this section, and really just highlights what the players know/are told to kick things off, and even that if very brief and well written. The inclusion of a notes section at the bottom of every page is wonderful. I always find myself jotting down notes about the names of new NPC’s the players meet, shop names and locations, and so on. All of this comes in a 2-column layout with a font that is large and easy to read. Did I mention that the core section of the module has about twelve room to a page? I’m no layout expert so I don’t have the words to describe what or how all of this was accomplished, but I can say that the result is outstanding. I thought that the Johnny Rook adventures were the best laid out I’d ever seen however this tops even that. I know I’m gushing over something unrelated to content. I try to be very forgiving about this sort of thing and hardly ever mention it, except in very dire/confusing products. Whoever made the decisions must work professionally in this area, as I suspect the Johnny Rook people do. Let me finish up by stating that using a web page to expand on the background and campaign data is perfect. It takes advantage of the modern era and resources while keeping that data out of the module, where it can confuse, and yet is still available for people who want the detail. And it’s actually where they say it is! unlike a certain troll …

The two wilderness encounters are mostly just throw-aways. A bandit encounter and a group of giant orcs. The orc encounter is a little nicer because it sets things up a bit more. The players get some warning about the encounter and this things should be more interesting. The bandits are just a night camp ambush and are not very interesting, even though I applaud them for using humans instead of humanoids … even if the rest of the module, and series, involves humanoids. There’s no wandering monster table, which is disappointing however I do wish to mention the stat blocks. They are presented very well. One or two lines that communicates all of the required data, in a slightly smaller font, and boxed to standout. This is a perfect way to communicate the data, and again shows the high quality of the layout.

The maps for the cave system are WONDERFUL and are some of the best I’ve seen recently. The abandoned kobold caves that make up the first level are about half caves and half worked, with some water features running the cave section and some very interesting murder hole passages running alongside the rooms. There are multiple ways between the various areas and rooms, allowing the party lots and lots of choices for exploration. There are also AT LEAST three ways to get from level one to level two of the dungeon! This is all great and it’s hard to ask for much more in this area … maybe if the pits exited on level 2 or there were slide traps? This is exactly the sort of map I’m looking for. They manage o fit 31 different encounters on the first level, which spreads out over two pages in the book. Level two is just as good at the first. It’s a nice cave system map with a water feature and lots of ways to get from one section to another, allowing for ambushes and encounter avoidance. There are also TWO more entrances to the dungeon on this level! This is REALLY excellent dungeon map design.

Level one is an abandoned kobold cave system. The players probably cleared it out in the first module in the series. This allows for another OSR element to show up: site repopulation. Since the party was here A YEAR AGO there have been some new arrivals. Sp,e vermin have moved in. There’s a group of grimlocks that have come up from the depths, and there’s an outpost of the orcs on level two. There’s also a lot of empty rooms, A great ‘monsters that have wandered in’ wandering monster table, and a nice trap with a subtable for broken bones. Monster stats are included in the wandering table in a kind of footnote style, along with some notes on the encounter. This is an almost perfect way to present the monsters. The stats don’t get in the way but are present, and the notes gives some flavor to encounters. Again this shows the high-quality and fresh layout. The second level is much the same as the first except far fewer empty rooms and more humanoids in the rooms and wandering monsters tables. There are some great encounter details in the dungeon levels as well. Slick stream crossings with varying depths, fights on a stone bridge, zombie harems, a few weird encounters, ambassadors from other regions, prisoners, etc. And these are not your typical puritanical orcs, they are dirty sobs that deserve what they get. The prisoners have been abused in various ways. The module is not prurient in any way, but you do get a much greater sense that these are bestial creatures, and evil. While I don’t generally like humanoids, because they flavorless, these have a lot of flavor. The impact of human bandits/cultists/etc performing these acts would probably be still greater, and this my preference for seeing them in modules, but this is a matter of taste and perhaps religion.

That’s the FIRST half of the module. The second half is full of details on the adventure. Sections on the new monsters, several pages of pregen pc’s with pictures, NPC stats and personalities, A section on integrating the game in to a campaign and linking it with the other modules, maps of the nearby town with a general key, maps of the caves, maps of the continent showing the region this is in and a very very good regional map showing the town in relation to the cave system. There are also several hard copies of adventure log pages for the GM. The amount of supporting detail is amazing, and it’s all VERY well done.

This is absolutely an adventure done right. It’s a little less whimsical than something like Pod Caverns, however it is a magnificent product that hits nearly every single thing I’m looking for in a module. The layout is … revolutionary is too strong a word, but quite quite refreshing, new, and very well done. This would be a VERY solid replacement for the orc lair in the caves of chaos type mini-campaign, and an overall great adventure even if it were not connected in the Usherwood Bone-hilt Sword series.