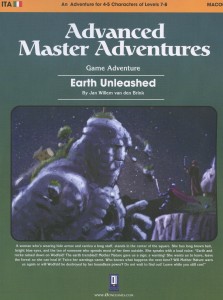 The Druid cried from the town square: “Mother Nature gave us a sign; a warning! She wants us to leave, leave the forest so she can heal it! Twice her warnings came. Who knows what happens the next time?” No good can come when the skies open up and rock and sand pour forth! And indeed, nothing does …

I’m pretty sure that there are two classic villains in D&D. Everyone is familiar with the first: The Evil High Priest. These guys have been around forever and are a staple of the genre. The second type is the Druid. A close relative of the evil priest, these folks are looking for balance and are just as fanatical as the EHP in defense of their own causes. Invariably they come in to conflict with the townsfolk and their true natures are revealed: they’re nuts. They’ve lulled us in to looking them over because of their inclusion as a class in 1E and onward, however let me remind you that Assassin also appears in that volume. Druids have long been a staple of adventure villainy, they just don’t get the limelight that the EHP does.

The module starts with a very long and very boring backstory that goes on for what seems like PAGES, but is actually more like a single page. It details the events surround the construction of a giant colossus by a wizard and his eventual defeat by a group from the forces of Light. This is one of those ‘ride around in the chest and conquer the world’ type giant colossus, that seem to be popular with a certain crowd. In defeat the colossus gets buried and a small village eventually grows up on the spot. A wizard finds a note about ti, discovers the colossus, and starts the process of reanimating it. The earthquakes and rain of stones causes the local Druid to think Mother Nature is angry and she starts preaching against the village and gathering a group of ranger, druids, and other nature freaks to help support mother natures cause. The party gets to investigate the strange phenomena, fight the druids, fight the wizards minion constructs, and maybe fight the colossus. Discuss.

There are some nifty elements to this adventure. As I mentioned, Druids are classic villains and I like seeing them and their flavor of extremism show up. A giant animate statue buried under a village, breaking free, is also a cool image. I also LOVE how the new wizard is portrayed. It’s raining so he takes shelter in a local temple, finds some notes on a previous wizards world domination project, and sets off to do the same! It’s like every wizard in the world is just waiting for the chance to pluck out their eye, cut off their hand, and go off on everyone else. This sort of ‘Just biding my time till I get more powerful so I can kill everyone/rule the world’ mentality is very neat, and reminds me a lot of the wizards in Anomalous Subsurface Environment.

Then, there are the misses. There’s WAY too much backstory presented. I’m pretty sure it’s an attempt to explain away everything that pops up in the adventure and give it a reason for being there. This is totally unnecessary; you don’t need a reason beyond “creation of an evil wizard who was defeated.” Just leave the rest for me, or leave it as a mystery. By explaining everything you take away the mystery which destroys the wonder. The druids are also REALLY gullible. The module attempts to explain how they are mistaken and being tricked, etc. This means that the 5th to 8th level druids and rangers don’t believe the word ‘gullible’ is in the dictionary. ARGGGGG!!!! How did they survive to 8th level??!?! They don’t need to be mistaken, they’re frigging Druids, the definition of extremist viewpoints! They’re like the Epicureans “Moderation in all things … including moderation!” Just have the buggers lay in to people because they’re druids! But, that’s not a valid viewpoint in the d20 high fantasy era, so they have to be mistaken. *sigh*

The adventure is short, and essentially event based. In five days time the colossus is going to rise and start killing folk/conquering the world. Until then the party can talk to the villagers and poke around the environment. The village where the core of the adventure takes place has eight locations, including “River” and “Main Road”, so the DM is going to have to put some serious work in to come up with a village and NPC’s for the party to interact with.Eventually they will find a golem walking in a wide circle, guarding the perimeter of the village, and might track it back to the entrance of the buried colossus. They’ll also be attacked at some point by the Druid and nature freaks, and, eventually, probably witness the colossus rising up from beneath the village. A friendly paladin ghost clues them in to the holes in the chest/back, which the party can use to get inside the golem and kill the new crazed wizard. Oh, and get to fight the invisible golems that wear boots of tracelessness, made special just for them. WTF?!?! Don’t justify your monsters, just do it! Why do they need to wear the boots? They’ve animate statues who are invisible, you don’t need to put the boots on them to justify them not leaving tracks,  just make them super light also. I like to call this ‘2E logic’, where everything has to make sense and be explained away. *bleech*