APS01 – Watchtower on the Hill 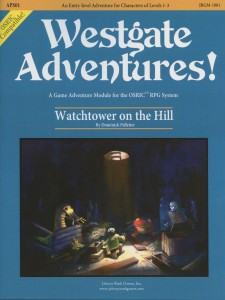 A shaft has been discovered below the old watchtower outside of town. Worse yet, a boy has fallen into it! Your party must race against time to save the boy and sift through the remains of the watchtower on the hill!

This module has a couple of interesting tidbits associated with it. The creatures and locations tie back to each other and to the backstory in a way that few other modules do. IN addition there is a time based element at play related to little falling down the well.

The backstory here is brief and at first glance rather mundane. Long ago a small watchtower was built on a hill. The lands were then overrun by orcs and the watchtower destroyed and forgotten. The lands were eventually resettled and the small collection of large stone blocks on the hill were mostly ignored; there were not enough to them to warrant any worry or prolonged curiosity. Little Timmy … er, Kevin, was playing around the block with a friend when the ground gave way and he fell in a deep hole. His elderly father bursts in to the local pub frantically looking for help. Unknown to everyone, little Kevin has started wandering around in the chambers under the tower looking for another way out. This is a rather interesting hook for a dungeon crawl. The players motivation for exploring the dungeon initially is a frantic race to find and save the boy. Once saved the players will probably continue to explore the dungeon. For some reason this seems both fresh and realistic, or perhaps natural, to me. Certainly “burst in” is quite a common hook element however the time based portion to save the boy as well as the natural progression from that element to looting the dungeon seems to fit together in a much more natural way than most adventure hooks do. I tend to think this was not an accident since there are there are other areas of the dungeon that fit well also.

Little Kevin was knocked unconscious when he fell down the shaft but has recently woken up and is now wandering the dungeon looking for a way out and/or something to stand on to reach the iron rungs in the shaft in the ceiling. Thus the more time the party spends gathering supplies, rope, torches, spikes, etc, the farther little Kevin has wandered in to the dungeon and the more likely he is to meet his end. There’s a nice little table provided to record where little Kevin is and some good guidelines as well as a randomized table on what Kevin does from turn to turn. He’s a small child, so sometimes he just stands there and cries while other times he moves on to a new area or tries to find something to help him and so on. I like this. It helps contribute to the sense that there is something going on in the adventure other than the party looting a dungeon. Unfortunately this is really only obvious to the DM. The party will have no clue, only knowing that Kevin is not at the bottom at the shaft and there’s a dungeon down there. I’m at a loss to figure out how to rectify the situation. The two level dungeon is a static environment, having been abandoned for quite a long time, and any telegraphing of Kevin’s actions will help remove the Search and Find aspect of the adventure. Maybe a strategic apple core or something similar? The search for Kevin does liven up an otherwise static crawl, otherwise this would be just a static exploration with no foreshadowing or build up … since there’s no central villain to build up.

The dungeon under the tower has two levels with about 34 rooms total. The maps are fairly static and simple with a hub and spokes design. The creatures fall in to the vermin and undead category, both of which make sense. There are a number of environmental issues as well, such as the crumbling tower, muddy rooms, and water filled corridors. What’s interesting is the way the rooms link to each other and to the backstory. Keys on a long dead skeleton fit doors in a different section. Logbooks list the names of the otherwise nameless dead. A dead soldier was writing a letter about his daughters dowery. These little touches do wonders to help bring the history of the location alive without an over abundance of exposition. There is also at least one, and perhaps two, encounters that are very dangerous for the party. Very appropriate for an OSR module. There is not an overabundance of magic items however the ones that are present are better than normal. A shield with a bonus vs acid, a sword with a bonus vs avians and bronze armor along with a variety of potions. I like the extra character added to the items; it’s not much however it contributes greatly toward a better adventure. I wonder why more writers don’t take advantage of it?

The magic items, integrated dungeon history, and search for Kevin elevate this from a typical dungeon to something above average. It’s very well thought out and put together.