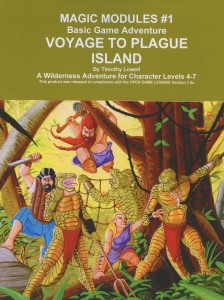 While sojourning in a nameless village on the Parched Coast you must have been slipped sleeping powders. You awoke on board an oared galley in chains, and forced to row. Your mind numb and unable to recall much, you rowed for what seemed like days. Talk among the other slaves was that the ship was bound for Plague Island. Your cruel captors, when not whipping you and your oar mates told you how wealthy you would make them once they sold you, and of how well you would die in the arena at the Jade Palace…

This module invokes a great deal of nostalgia for me. It resembles very closely the third-party products in that time before time that was the mid to late 70’s. Or at least it resembles the way I REMEMBER the products from that time. The charm of home-brew and originality, frameworks for play, and no pre-conceived notions on how a module should be organized. This product has A LOT going for it.

We might call this a wilderness hex crawl on an island, which places it in the same realm as Isle of Dread and Smuggler’s Shiv. In all three of these cases the party is wandering around an island with a few secrets. This module has a little more going for in that there’s also a single timed event to shake things up and there’s quite a bit of original monster and magic content. The island is about 24 hexes on a side with each hex being 10 miles. There are 21 core keyed encounter areas with a few ruins, sea caves, tombs, and weird things to round things out. The section describing the NON-keyed encounters provides several excellent examples of D&D originality.

For example, there are vine covered ruins on the island and some of these have pictographs on them; a magic-user can decipher some of these to learn new “spells.” If the MU gathered the cremated remains on ivory ape then they can cast The Rending Mist … which does pretty much what the spell name implies. These are not spells in the traditional D&D sense but rather more rituals, in the modern D&D language. Concentrate for d6 rounds, fulfill the material component portion, and make a save vs. magic. Succeed and the ritual goes off. Fail and YOU LOOSE A POINT OF CON PERMANENTLY! Now THAT’S magic I can support: deadly, dangerous, and mysterious. There are six such spells presented. There’s also some 8′ tall boulders with weird things carved in to them that do something different but is just as bizarre. A more subtle example would be the giant octopus lair with a chest on a dry shelf containing a golden knob. It can fit atop a wand and turn it into a magic wand containing a certain spell with 3 charges. Or rather it IS a magic wand with 3 charges that needs a wood stick to fully operate. Those are all very fine example of the sort of home-brew mentality that’s present throughout the product. I LOVE THIS, and it’s part of the reason I find joy in OD&D; the lack of rules mean everything is wonderful and mysterious and new. There are many examples of this sort of thing in the module however they all make sense in a way that funhouse dungeon usually don’t.

The island wandering monster is extensive and most of entries have a sentence or two on how they will react to party in different circumstances. There’s also a brief Events table which are … non-violent encounters; they mostly environmental or circumstantial as opposed to encounter with creatures. I was extremely happy with the wandering monster table and its idiosyncrasies, The keyed encounters are all pretty good however there does seem to be some sort of discontinuity between a certain group of slaver minions. In one place it’s stated they will do one thing for the slavers and then it turns around and says the opposite. I suspect this was a leftover from editing and while it’s a bit confusing when encountered it’s not really a problem; it’s really just advice.

There are more hooks provided beyond the primary one and the circumstances of the island make most of them fit in well. The given hook is probably VERY brutal and I would only use it with a group of experienced OD&D players. Stranded with no armor, weapons, holy symbols, or spell books AND manacled is going to be rough … especially with owlbears three rounds away from you …

All in all this is a very good module with a nice old school feel to it. This invokes strong nostalgia more so than almost any other newer module I’ve seen, because of the layout style and the idiosyncratic rulings. It feels like a module from the 70’s that was rediscovered and sent to Lulu. And that’s a very good thing indeed. It feels authentic.

3 Responses to Voyage to Plague Island