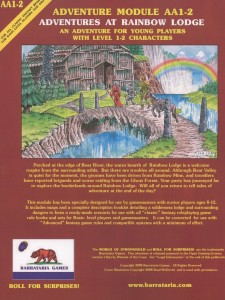 Perched at the edge of Bear River, the warm hearth of Rainbow Lodge is a welcome respite from the surrounding wilds. But there are troubles all around. Although Bear Valley is quiet at the moment, the gnomes have been driven from Rainbow Mine, and travellers have reported brigands and worse raiding from the Ghost Forest. Your party has journeyed far to explore the borderlands around Rainbow Lodge. Will all of you return to tell tales adventure at the end of the day?

This module is specifically written for younger players, between the ages of 8-12, and is meant to be an introduction to the game. In this respect is is a true DM aid; full of advice on how to run for younger players and having the encounters built for this other style of play. It largely succeeds in both of those endeavors and thus should be considered a successful product. The first of the two adventures is particularly good.

SOAPBOX ON: I would have loved to have introduced my kids to D&D with it. Instead, I went out with a boy who died. Oops, no, I mean I made a fatal parenting mistake. It seemed like a good idea at the time but now I’m forever living down introducing my kids to D&D with 4E. Powers on cards is not a good thing, it’s physiologically limiting. It’s bad enough I have to live with my poor wires 3.5 skill-heavy play options, but to NOT use ones imagination? The little boy wizard has largely recovered, mostly because of magic spells, but the little girls likes fighters and is now forever handicapped. With great effort and dedication I hope to reawaken her imagination, but it’s going to be a hard road. Take some advice from a fellow parent: introduce your kids with something like this. SOAPBOX OFF.

The module contains a small region, the Bear Valley, and the inn that can serve as a home base to adventurers in the valley: Rainbow Lodge. It has two small adventurers and a section which briefly describes each of the more interesting areas in the valley. The lodge proper is laid out in three pages. It has a strong selection of NPC’s available to meet and it very well described. You really get the feeling this place is located in some pacific-northwest pine forest with a big smokey homey inn. THis description of the lodge, along with the front-cover does wonders to create a nice atmosphere. The NPC’s are generally the usually sort: gruff innkeeper, happy busy cook, stableboy, ne’er-do-well, and so on. Some of them are available to hire out to help the party while others just provide local color. None of them have names, which I found very interesting. It’s stated that this is to allow the DM to easily slip it in to their game world, however I found that it very solidly cemented the roles of the NPC’s in my mind. They are the usual assortment with a few secrets, but the first-timers won’t know that and learning that not everyone who is friendly is honest should be a fun D&D lesson.

The two adventurers are very linear, on purpose. Remember, this is for 8 years olds. The first starts with some horses being stolen from the lodge and the local Patrol officer hiring the group to track them down and bring the bandits to justice. It’s linear, with about 11 encounters. The lodge description has a footnote stating that the DM could remove the beer & wine if they didn’t  want to put that in front of their younger players however the first adventure involves killing people. Ah, the joys of D&D! This first adventure has several interesting points. One is the use of skills such as tracking and riding. I don’t approve: skills are a gateway drug to non-imaginative play. I’m also pretty-sure they don’t exist in BASIC unless you roll 3d6 or a d20 under a stat. The encounters ARE pretty nice for younger players. A bandit fires an arrow from behind a tree and runs off. There’s a giant beehive to learn a lesson from. There’s an old tree with a opening it, containing a small hole with a rattlesnake and a leather goody bag. There’s also a frigging owl bear encounter AND a ghoul encounter! Yeah, unit loss is a feature of an older play style, as is running away. Both encounters are telegraphed a  bit. But man, those are rough encounters for first-time players who are 8. The encounters are all described very nicely and are quite evocative. The owl bears cave and the ghouls tomb. I thought the adventure was mostly put together with a great deal of though about younger players. It would serve as an excellent introduction. The second adventure is more of a traditional cave exploration. A gnome miner has gone missing and the party sees his wife crying in the lodge. Hopefully they go find him for her, which takes them to their mine. This section has about 15 rooms in two separate cave/mine systems, linked by a secret door. The locations were not as interesting as the ones in the first adventure. There’s a skull with a key in it, a wet room with a boot sticking out of some yellowish colored mold, and some doors hidden by carvings with levers to pull. Otherwise the encounters are just not too interesting. Plus, there’s an undead troll-goblin, with no description of what it does besides the basics or AC, HP, MC, etc.The section about the valley takes up about three pages and has about 20 locations that could be used for further adventures. Wild onion fields and cave bear lairs, orc encampments, and so on. The pregens provided are probably a good idea as well, lest our young players get too attached to someone they personally identify with. The wandering monster table for the valley, which is not used with the two adventurers, is a bit of lark. Hey kids, who wants to fight a Frost Giant!