Tomb of the Iron God 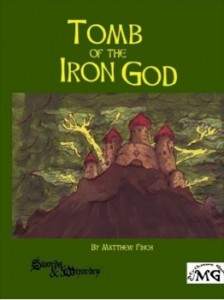 This is a near perfect example of an old school adventure module.

Villagers report that there was recently a truly massive lightning storm that centered on the nearby Monastery of the Iron God. There have been no sign of the kindly monks since then, but rumors of the recent wealth of these monks are well traveled …

Before I get in to this adventure, which is totally awesome, I would like to once again offer a few words of advice. If you happen to find yourself in a fantasy world in which The Gods are obviously real (grant you spells, show up frequently in visions and a bit less so in person, etc) then it’s probably not a good idea to join a religious order and then piss off the patron god. If you DO want to do that then at least join a different gods cult first, preferably a diametrically opposed one, so you get a bit of protection from the wrath of the first god. You can still expect some fallout, but at least you’ll have some protection. The moronic monks in this monastery did not follow that advice.

The background section is short: a goodly order of monks, charged with interring the dead, have reinterpreted their vows and now keep tribute. Their god, The Iron God, who lives in their monastery along with his nemesis, punished them. Hard. This is detailed briefly in a couple of paragraphs along with the player hook “rumors of wealth!” in just a half page or so. A very nice rumors tables takes up another small section and then the adventure keys start. This is the way I like things; just enough detail and background to get things launched and then leaving the rest up to the DM. I don’t need a three page epic backstory, I need just enough information to refresh me memory and get my whimsy juices flowing.

The monastery has two levels with about 60 keyed rooms. The maps of the two levels are pretty well designed. There are lots of alternative routes, loops, and other ways for a party to get from point A to point B. I love these sorts of maps. They lend a real sense of exploration and discovery to an adventure. Monsters can show up behind a party, ambush, or be ambushed. In fact, one of the room encounters with goblins note that they will use this very tactic! The maps also detail lots of statues, pools, secret doors, pits, and other associated features. Just what I’m looking for! The wandering monsters are nothing too special: undead, goblins, and vermin. Each type IS given a maximum number. Once the party has killed 50 giant centipedes then there will be no more appearing, and so on. Stats are included, which I appreciate. A real opportunity was missed with the goblins though.

Yes, there’s goblins. I generally don’t like humanoid monsters in my adventurers. They are mostly a substitute for “evil human bandits” and rarely have anything interesting going on. I generally prefer, and substitute, brigands and reserve ‘Monster’ statues for the truly bizarre stuff. I think the real monsters have much more impact that way, it allows for more role-play, and can give the players second thoughts: all humans look alike, are they 0-level or more experienced? I’m not saying that humanoids can never be used well, but they are so rarely that it makes more sense just to substitute some bandits, with the same stats. In this instance the goblins are mostly just window dressing and something to get hacked on. There are two exceptions to this though that reveal more of what could have been done with them. First, the shaman has left a shrunken head in the entryway with a magic mouth on it. That’s nice. It starts bleeding over in to the goblins being a real race with different values and culture. They are still gonna get hacked down in that case, but at least the flavor text is nice and we get a better sense of the weird and alien. Second, one room have a group of goblins playing a game of poking a captured cat with sharpened bones. This sort of snapshot of Real Life taking place in the dungeon is something I like to see. it gives the sense that life is  taking place outside the actions of the party. Sadly, this room is the only real example of that. The wandering goblins, and the few fixed encounters with them, would have been a wonderful opportunity to display more of this.

The module dungeon has several other nice features. There are statues and fountains to play with and explore. Most of these do strange things. Who wants a +1 in combat for the next day! Oh, or you might die. Go ahead guys, push the big red shiny shiny button …   I love seeing that sort of thing in modules. There is also something akin to factions, or at least allies, in the dungeon. More than one room has some potential allies the party can take advantage of if they keep heads on straight. There’s also a lot of inscriptions on walls, bizarre statues who’s faces change, and spooky crypts to explore. Oh, and two gods. Yes Virginia, this 1st level module has two gods in it. It also has probably over 500 monsters in it. Yes, you read that right. And a decent number of the rooms are empty. Group that charge in expecting to win every fight are going to be TPK’d in short order. Gotta know when to hold em and know when to fold em folks. There’s a lot of good treasure, not just in coin but in rugs, tapestries, candlesticks, etc. Most of the magic items are rather normal ones and I would have preferred to see those items personalized; +1 shield is boring.

The module ends with some advice on how to run an old school dungeon and advice on restocking the dungeon; who moves in when the players retreat to rest in town. These are both good sections, especially the one on how to play old school style. It’s good primer on the Imagination The Hell Out  Of It attitude that I enjoy so much.

2 Responses to Tomb of the Iron God