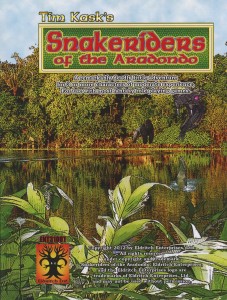 The module has roughly 14 pages of lead in, ten or so pages of ‘Wilderness Adventure’ and another ten or so that details the snake temple including its encounters and maps. For all of that there is very little adventure present. There’s lots of background, ecology, general descriptions and the like, some of which is interesting and nice, but it fails to deliver on adventure, at least by my standards, and probably by most modern expectations.

The lead in consists of an introduction by the designer, a couple of pages describing his game world, a couple describing the adventure hook, and a few more describing the primary … ecology/culture of the region and the ‘main’ enemy. There are some really nice ideas floating around in this section. First, I LOVE designers notes. Too often it’s very hard to get the feel for a product, or game system, by just reading the rules or playing by yourself. I love to play new games at cons chiefly because of this reason. You can get a good feel for the intention and atmosphere of the game when its run by someone who cares very deeply about it, such as the designer or someone close to them. A lot of the designers introduction and background in this module helps contribute to this and I appreciate seeing it.

The hook has both positives and negatives associated with it. The players are sent on a mission by a great wizard to Save the World; that’s the bad part. Yes, I’m aware that hundreds if not thousands of adventures have the players being sent on a mission. That doesn’t make it a good hook. The problem with this is that it assumes the players want to save the world. Are your players heroic? Mine generally are not. Oh, my 11 year-old son is. He identifies strongly with his magic-user Blaze and I’m sure he sees himself as Blaze and wants to be brave and heroic. He goes on adventures because it’s the right thing to do. My 12 year-old daughter doesn’t anymore. She’s moved on to where most of my group players are: gold, fire and torture, to steal a term from the blogoverse. Frankly, these are the groups which have I have the most fun with. A bunch of people sitting around having a good time and sending their characters on an adventure to grab some loot. I recall an OSR con game I ran at WhosyerCon [Let me tell you about my character …] where the players ended up shooting an old farmer in the leg with a crossbow as he ran away form the inn. They proceeded to threaten and torture him to get him to tell them the story about the old temple up on the mountain. THAT was fun. Everyone was laughing and having a great time. Yeah, these guys will go an adventure because “its the right thing to do” but they will also roll their eyes and utter ‘LAME’ under their breaths also. Essentially this hook boils down to “this is the adventure I’m running tonight and you’re going on it”. Yes, to a certain extent that’s always true but it’s always better when the players don’t roll their eyes at you. So, the hook is lame. Except for the end of it. You see the characters are given a giant gas-bag creature that flies/floats and has a gondola underneath that’s piloted by a trained chimp named Louis. Now THAT’S adventure! That is just the kind of moderately silly but totally cool stuff I like to see in an adventure. It’s whimsy, it’s gonzo, and it’s wonderful. I just wish there were more of it since, sadly, that’s the only example present in this product.

The rest of the introduction section is a bit muddled. There’s historical data intermixed with background intermixed with history, creature stats, and so on. I’m not going to complain that a great deal of this information is, these days, generally included at the end of an adventure as an appendix. I’m not tied down to the usual layout formats. My problem is that things are too lengthy and too mixed together. The way it’s presented is confusing, with bits of data from the various parts mixed in and around the various sections. I found most of the information about the game world and the background to be unnecessary and/or overly wordy. There’s a great deal of background but I didn’t find that it provided much in the way of actionable or interesting information. I’m sure others will be interested in the details of Kasks world for historical or anecdotal reasons. I’m not. I want to run an adventure. [Ok, so, I’m interested also. But not in the required reading portions of my adventurers.] The core of the enemy is found here also: there are these jungle fey and they now ride these giant snakes. That’s pretty cool. Unfortunately the fey come off more like jungle kobolds, complete with blowguns and atlatl, rather than fey

The giant airship drops the party off at a beach on the target island and they must now go inland to find the fey, discover the secret, and save the world. [There’s another one of those triple moon alignments coming up, you know, the ones that happen every 200 years? Next time your party should schedule extra-planer vacations every alignment, eclipse, etc.] Up the river or along the trail the party goes. The alignment happens soon, within a few days, so they better get moving. How long will it take? Well, that’s a mystery. You see, while there’s a simple hex map provided it’s actually more of a diagram because there’s no scale or distance noted on it. Or in the text. Clearly the party is meant to travel from the beach to the temple and fight various flora and fauna along the way. This section details several new plants and animals that the party can encounter. But there’s no way to tell how big the hexes are or how far away the tempe is. This is compounded by a lack of encounter charts. There’s no wandering monster checks, no encounters on the wilderness map, nothing. Just a description of several flora and fauna the party may encounter. Look, I get it. I’m a decent DM and I know I need to fill in details. I can decide how long it takes the party to get there and I can thrown some of the monsters at them and I can create some interesting encounters, like a fey village, a broken bridge crossing etc. You know what else I can do? Not buy this product. This really begs the question of how much content and of what type a product should include, and what the purpose of a module is. As is, this is more of a setting or backdrop rather than an adventure. There are some parts here that are good. I ALWAYS love new monsters, especially those that have new/different abilities. Giant puffballs and carnivorous plants plants fit in perfectly. These are supplemented by crocs and carnivorous apes; not the most original but they fit in well with the adventure. There’s also a table that I ADORE. It’s small, just a few entries, and details ‘other giant creatures’ that the party may encounter. Very basic, a name, some AC, HD, etc, and a column for damage. A few have straight up damage: 1d8, 1d10, etc. But the VERY cool ones only have a word. “Drain” or “venom” or “poison.” Yeah baby! That’s the kind of seat of your pants play that I love in old D&D. What does the “Drain” ability of the giant leech do? It’s up to you! I love that. None of that namby pamby codified 4E rules nonsense here. Just a DM and his imagination, kicked started by a one-word entry from the designer.

The final section of the module is the snake temple. It has two levels with about 21 encounter areas on the first level and about a dozen or so on the second. It’s clear that this is the goal, the page heading even states this is the climax of the adventure. The temples two levels are teeming with … nothing. The past is empty. Ok, it’s not empty and I do have a strong tendency towards hyperbole, but it might as well be empty. Let’s see, there’s one of those fey on the second level, he’s about 1HD. Then there’s the room with six carnivorous apes in it. Oh, and the room with the giant spider in it. That’s it. The Snakeriders? There’s ONE, patrolling the lower level. That’s right, ONE. In the entire module there’s ONE. ONE. FUCKING. SNAKERIDER. Look, I’m not making this shit up. It’s possible that I missed something, but I did read the thing through three times. ONE. There’s some small mundane and magical treasures, but mostly the few rooms with stuff says “feel free to put something in this room, a minor magical item. I put a magic wand in it.” Ug! How about I use the random dungeon generator in the back of the DMG? Then I don’t even need to buy this product! [See comments above regarding what a product should include, and expectations.] There’s one puzzle in the temple, involving the quest items and the end of the world thing. Otherwise the rooms are basically empty. What do I mean? Let me quote: “Several large barrels and boxes are scattered about, all empty. This was a seldom-used storage area.” You know get the basic idea of just about every room in the temple. Ok, I’m exaggerating a bit. Just a bit. There’s a room with poison gas in it and a room that smells funny also.

Yeah, I had strong feelings about this one. I try to describe modules so people can make an informed purchasing decision but sometimes my emotions get the better of me. I know what I like, I think I’m pretty clear describing what I like and why and what I don’t like and why. I hope that despite my OBVIOUS dislike that you can come away with enough information to make you own decision. I should point out that I don’t LOATHE it and I’m sure that there’s someone out there who can use this. [My loathing is reserved for the products that I’ve seen from Ronin Arts and Alphonso.]