The House on the Hill 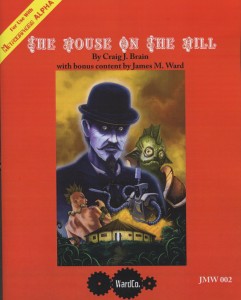 Oh post-apoc, how I love thee!

Here’s something never ever ever seen before: a supplement for Metamorphosis Alpha. To my knowledge this is the ONLY supplement ever produced for that mighty game. With a title inspired by the Robison poem, I presume, and the cover having a Something Wicked vibe, this supplement deals with that most common of thing: an RHMDU. The Round House Modular Dwelling Unit is just a basic house, with a simple and uniform floorplan. It’s generally the target of looting, vandalism, or a lair. It’s gets old fast. This supplement spruces them up both with an adventure, several new seeds, and a bunch of tables that can be used to generate some houses as the basis for adventure.

First up is the adventure. It is … good? I guess I don’t know how to categorize it. It takes a common element in Metamorphosis Alpha, the RHMDU, and combines it with a relatively common situation. There’s nothing much super extra special about the adventure. Uh … other than it being the only one every published in the history of the game. It is however a VERY solid adventure that covers all the bases and should be a memorable evening for a group of players.

Essentially, the players stumble upon a RHMDU in good repair with a manicured lawn and a mailbox out front. At this point two things are going to happen. First every player with an inkling of common sense is going to know that the robots are still running and present. Second, each one of those of players is going to start drooling over the ancient tech sure to be in the house. The adventure has nicely covered two critical components: hook and foreshadowing. No ‘being sent on a mission’ or ‘end of the world’ nonsense here, just a pure appeal to the base greed of every player character ever generated. Perfect! Second it covers some foreshadowing, or build up, of the villains. Some build up and anticipation is a great part of an adventure. You want your players saying ‘Oh shit oh shit oh shit, robots!’ or ‘I know hers here man, keep an eye for him. I LOOK BEHIND THE DOOR!’ or maybe even ‘uh … he that guy seems serious. he keeps leaving impaled bodies with our names on them …’. This introduction leads to anticipation and fills the players with a whole new load of emotions to work against and have fun with during play.

Yes, the house is still operational. The party has to deal with a host of robots still serving their old master. This hits another important aspect of gameplay: options other than combat. The players can just the bash the robots to death, and probably loose several of their fellow members, or they can reason and roleplay with the robots. Option two is FAR more fun, as the party squirm to balance their greed with their fear the robots and keeping in their good graces. Besides, you know they are going to end up in combat anyway, they’re player characters after all! You can always count on them to get in to whatever trouble is laid out for them to hang themselves with! The adventure is, well, typical for this situation. The players dodge/kill robots, interact with mutated stuff, play with the tech, and then discover the houses secret and try to get out before the reactor overloads, all while loading up their greedy little pockets. Yes, like all good adventures it involves an overloading reactor. Which reminds me, I should run a campaign where the players leave behind a radioactive crater every night/adventure. There’s lots to get in trouble with in the house, tech to loot, and funny robots to play with. “Would your pet like a treat, Sir?”

The back half of the booklet is new content from Jim Ward. Jim gives you maybe a dozen or so additional adventure seeds. The first two have three or four paragraphs associated with them and the next ten or so have just a paragraph or so of text. And oh what seeds they are. The players spy a robot with it’s arms overflowing with ancient tech weapons rolling towards an RHMDU. The players must present a scroll inside as a rite of passage; it asks for Luj Zooprimo Pee Za. X-Tra Chiz. No En Choviz.” Solid GOLD! The final section is a selection of 35 random tables that can help a GM generate a RHMDU ready for exploration. These tables work together to generate the building condition, occupants, artifacts, power devices, wall decorations, and much more, as well as conditions for everything! This thing just BEGS to be a programmed utility on some website. With the output you should have a complete complete house ready to explore, and almost certainly a complete adventure seed ready also, if you have any modicum of imagination.

Best of all, you should be able to use this booklet easily with Gamma World, Morrow Project, or any other post-apoc sci-fi setting.

1 Response to The House on the Hill