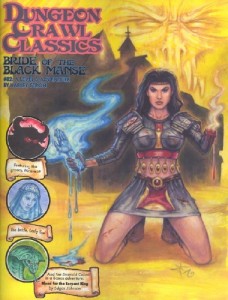 Centuries past, Lady Ilse ascended to scion of House Liis by trading the archdevil Mammon what he wanted most: her immortal soul – and a diabolical betrothal. The triumph proved hollow, for every year on the eve of her fell covenant, she was beset by visions of Mammon and her foul promise. Seeking to save herself, she was buried alive, swaddled in the holy symbols of a dozen divergent faiths. This desperate ploy held Mammon at bay for centuries…but a devil can afford to wait a very long time.

After hundreds of years, the last of the holy wards has fallen. The devil has come to collect his due. Tonight a storm crashes against the ancient manor house and forgotten spirits rise from the muck and mire. The fallen belfry tolls once more, announcing the hellish fete. As the adventurers arrive to explore the Black Manse, Mammon calls for his winsome bride. He will leave with a soul at the end of the night. The only question is: whose?

Uh … Wow. EASILY one of the best adventures I’ve seen. It’s also got aspects of a horror adventure and a mystery adventure … both very hard genres to pull off, but done well in this. Old manor home to be explored, compelled characters, a time limit, changing environment, weird encounters … I don’t know how else to summarize. The depth in this, along with some of the typeface choice, make things a little during play. Finding what you want, etc. But the thing is TIGHT also. It’s just PACKED. It’s all that “hidden depth” that you read about but never see done well. Well it’s done well here.

I’m not a very good writer. I tend to fail when it comes to the REALLY good product … like this one. They tend to have so much depth and complexity and so many good things going on, hitting on everything, that I’m either over-awed or just don’t know where to start. I guess I’ll go through it linearly? It starts with a GREAT summary of what’s going on. A nicely boxed Key Plot Points and the timeline laid out in way that’s easy to find and helped the DM understand what is going on/needs to happen. Essentially, you have four hours to complete the adventure, realtime, with the bell in the ghostly bell tower ringing each hour. Nice sense of foreboding there. I LOVE it when there’s a well-done timer in an adventure. Watching the party freak out, argue, and loose it over something as simple as a bell tolling is a pleasure in life that everyone should experience. There also a couple of hooks. You can get the manor home given to you as a reward (kind of lame … but at least the characters ARE getting rewarded with something), or you can get a note from a distant relative, addressed to the PC, dated 500 years prior. Not the strongest hooks ever, but not “Caravan Guard” level either. And then there’s the BIG one: when some PC dies in a different adventure, they awaken before a dark throne, covered in flames. A towering figure leans down and whispers “Not Yet, you are promised to another,” GAHHHH!!!!!!!! You wake up with 1hp and a pentagram on your forehead. GAHHHHH!!!!!! You’re dreams are haunted from that moment forward … and your journey takes you inevitably toward the high moors …. GAHHHH!!!!! One time at band camp I gave a PC a pig tail and cloven feet and the girl playing the PC was so freaked out that she had her character quit and started a new one. I can’t imagine what she would do if THAT hook happened to her!

There might be sixteenish locations in this adventure, over three levels. We’re not talking majorly complex map here … but then again this isn’t a dungeon crawl. It’s … I don’t know … theater? No, that’s not right either. Nor is set-pieces. It’s essentially a small manor home in which each area is a kind of … puzzle? Not really … but I guess that’s close? It’s all so TIGHT, but deep also, and works together so well … In one LARGE basement room there’s a lot of water, up to you ankles or knees. Hundreds of skeletons rise up out of it, well described in a way that gives you a GREAT visual image of the scene. Not generic “skeletons” but the actual bits of detail that cements a scene of horror in your mind. They stand and stare at the party, kind of encouraging them (dread as a motivational technique?) to a certain area to put their souls at rest. The room in question, next door, has a clever pentagram puzzle, with some nice clues but an open-ended kind of solution. Similarly there’s an “arm chopper” that can make a Hand of Glory … and you might find it right before you encounter a macabre & ghostly scene in which you could REALLY use a hand of glory. It’s not telegraphed; it’s presented in such a way that the party can figure things out for themselves. And I’m sure they WILL. The lightbulbs WILL go on. Usually writers THINK they’ve laid good clues, but they have not. In this case the clues are there and OBVIOUS in retrospect. That’s exacty the way a D&D adventure should be. As soon as the situation is sprung the party should IMMEDIATLY realize they walked right by what they needed for it. They think more. This adventure does that. A Lot. And if the party thinks, even a little, then they will be prepared and they will be proud of themselves and feel like they have accomplished something and gotten one over on you. Which is exactly how they SHOULD feel.

I don’t know what else to say; my head is swimming and I’m sure I’m letting folks down. I’m not doing a good job telling you why this thing is good. It’s imagery is VIVID. It presents WONDERFUL situations. Not the generic set-piece bullshit but more “everyman confronted with horror” that LotFP sometimes tries to do … but SO much better than the early LotFP product.

If I had a complaint it would be the format. It looks like DCC is using their standard layout. I’m not sure if that’s the best choice here. The text is large, the real-aloud is italics, two-column … but these rooms are DENSE … half a page or so. It’s not exactly wall of text, and it’s not superfluous stuff and it’s it’s not Kuntz buying something in there that no one will ever find … this is all GREAT … it’s just right on the edge of needing a highlighter Maybe some indenting, section breaks, more bolding? IDK.

This is available at DriveThru