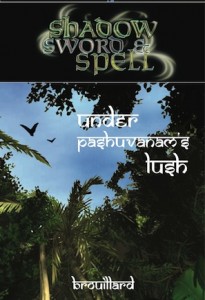 Covering most of this land is a thick jungle called the Pashuvanam, or Jungle of Beasts. The jungle deserves its name. Fierce monsters and animals plague Beidhanids and Nipuans alike, sometimes destroying entire villages. Over the last few centuries, most of the dangerous creatures have been driven away from major settlements and main roads, giving the inhabitants a sense of security. Still, stories of unspeakable horrors lurking in the jungle’s depth persist—and are regularly proven true. What evil lurks under the lush?
I like a certain style of D&D. I don’t like the style of D&D, or RPG’s in general, that this adventure represents. This adventure takes place in a West Asia/India setting. It’s meant to be a pulpy human-centric world. It’s organized in a chronological flowchart style and, while full of fluff, offers little in the way to motivate the players. The game system is NOT a D&D clone.

This takes places in a pseudo-historical red-dot indian setting and is FULL of superficial cultural references. Castes, cults, language and culture all combine to give that superficial feeling of a pasted-on theme in which to set an adventure. The explanation for many things in this adventure turns out to be “its a cultural thing.” A huge number of words are spent on various cultural themes which are then generally ignored except when used as a pretext for some hook. Castes, in particular, receive lengthy and frequent mention and yet they really only show up in play twice: once to kick off the adventure and once as a throw-away line for a marriage. Otherwise they get mentioned in passing all the time but nothing is offered in way the conflict, literally or figuratively. The booklet is almost one hundred pages long ( and GORGEOUS) but only offers about 13 different encounters/locations. This should give you some idea of the lengthy background material and fluff that accompanies nearly everything.

The thirteen core encounter areas are laid out in a kind of chronological flowchart. Day 1 in city X leads to day 2 in city X which can lead to day 3 in city X or you can then transition to day 1 in city Y. Rinse and repeat thirteen times. “Day” is a bit of a misnomer since multiple real days can happened between several of the events. And that’s what they are, events. Is it a railroad if the players don’t care and can get out of the adventure at any time? This would be very railroady if there was some reason for the players to be interested.

The players are shipwrecked, or captured by pirates or something else and end up in this Indian city. As foreigners they need to go to the temple of Chuck to get a caste assigned to them. There they meet a priest, get their castes, and are then interrupted by a guy in a red turban. Seems he’s on a vengeance quest. It’s rare but not unheard of in these parts. The priest asks the players to go warn his friend Bob that the vengeance quest guy s after him. Oh, and Bob is in a different city. Oh, and those new castes pretty much compel you to complete the task … if you care about such things. Not a strong reason to be in the city and not a strong hook. This falls pretty much in to the much-loathed “go on the adventure because its the adventure were playing tonight” hook. That’s not a very compelling reason for the PLAYER to get interested, especially when its combined with “its because of some stupid cultural thing.”

The party joins a caravan to go the next city. They play cards (what is it with made up card/dice games in adventurers? I thought that went out of style in the 80’s?) They experience events. Zzzzz…. Ok, that’s unfair; this part actually contains a pretty good encounter … and two of the worse ones in the adventure. The caravan stops in a village and the a beautiful 14 year old girl approaches the characters. She’s supposed to be married to a goat soon and, Surprise! Surprise! doesn’t want to be. I found this to be the most interesting encounter in the adventure. It’s absurd, relatable, and there are all sort of solutions that the party could implement. The other two encounters on the caravan are lamer. In the first the party is ambushed and attacked by the caravans own scouts., who turn out to be Thugee/Kali-worshipers (errr … by which I mean the local equivalent.) They can make a skill check and if they get the best result possible they realize that it’s a trap! It’s pretty lame. But not as lame as what’s to come. The final caravan ‘Day’ is an attack by a rival nations raiding party on the caravan. The party is urged to defend the caravan and the other people get ready. The bad guys attack! An INFINITE amount of bad guys. The caravan has to get overrun and burned and the DM is urged to send more and more enemies until the party flees in to the jungle, along with the rest of the survivors. This COMPLETE FUCKING BULLSHIT serves ABSOLUTELY NO FUCKING PURPOSE at all. The party quickly makes it the nearby city they were traveling to. The caravan, and it’s master, has no involvement in the adventure. So why the fuck would you railroad the party and make their action irrelevant? To tell a better fucking story? That’s fucking bullshit. Why not let the party create their own story, especially when it has NO impact on anything else going on? Err, I mean … “I was disappointed by this aspect of the adventure.”
Great! The party has made it to the city where Bob lives. (Remember Bob? The lame-o hook was to notify him that some guy was on a vengeance quest to kill him.) The party find him and notify him. Quest over! Yeah!

Oh, no, wait. Now the adventure turns COMPLETELY around. Out of nowhere the party learns about some children being marched off to get a better life in a monastery. Bullshit suspicions are raised. And by that I mean that the party has to remember, and follow-up, on some pretty tenuous ties. The old priest called Bob his “good friend” but Bob doesn’t specifically remember the priest. That’s about it. Based on that the party must badger Bob in to revealing more. about his new religion. You see, he distributes charity to the poor in a filthy stinkhole of a city. Oh, and he blesses the guys in the iron works, going out of his way to be nice to people who are frequently maimed in the course of their hard lives. And he’s sending some kids off to get educated and give them a better caste. This, clearly, means that the party must badger him in to revealing more. A lot more. Like REALLY get on his case and get him seriously agitated. Who the hell is going to do that out of the blue? Based on his charitable works? Or the fact he can’t remember a priest? LAME.
Somehow the party follows the kids, find a village who tell them about a temple in the jungle and then go to the temple. Inside they find a bunch of slaves, some human lackeys, and a Naga. The temple map is essentially linear and the rooms don’t really have anything interesting going on, with a single exception. I’ve poured over this section multiple times and I can not for the life of me figure out how many lackeys are in the temple. It’s implied several times that they will defend the temple but there’s no indication how many there are. That would seem to be a critical fucking flaw. The one interesting room is full of drugged slaves being fed and/or having their organs harvested. Kind of neato. The Naga has an interesting element to it also. The characters saves vs the Nagas hypnotize power are modified by how nice they’ve been to people. Save the goat girl? +2. Been polite to your elders? +1. Won money gambling? +1. (WTF?!) That’s an interesting mechanic. It reinforces certain types of behavior though, which almost certainly leads to min/max’ing and railroading. Better be good or the monsters are gonna get you!
Finally, despite the name of the adventure and publishers blurb, the jungle doesn’t really play much of a part here. It’s essentially non-existant. Pretty strange. A Naga temple in a jungle is a pretty classic element, too bad the jungle isn’t used at all to make things more interesting.

On a positive note: each location in the adventure, as well as several more locations in nearby areas, have several rumors associated with them. These are clearly adventure hooks for the DM to utilize. “The gold comes from abandoned tombs” and “The giant Bohar boar is on the loose again!”