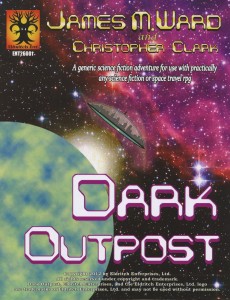 An up-front warning to help mitigate what’s to follow: My one true love is science fiction and I love Gamma World above all other RPG’s. Despite this, I think SF is a damn hard genre to run. The players have access to information and technology that can overcome nearly any obstacle and week after week of ‘Space Dungeons in the Sky’ just does’t make sense. I have the highest regard for anyone who can run a successful SF game for more than few weeks.

Dark Outpost follows a pretty basic hook: a newly built space station has gone offline and is not answering hails. The party is sent in to find out what’s going on. In the best traditions of Jim Ward, they are probably going to get themselves killed and that’s probably going to be because they forgot their mission. Their job is to investigate and bring back information so someone ELSE can solve the problem. This shouldn’t be too difficult but characters being controlled players mens that the body count is likely to be high. One of Wards oft quoted saying is that he doesn’t kill players, they do it to themselves. After seeing this module I couldn’t agree more: he sets up situations and the players pick the apple and dig in.

The space station is divided in to nine sections each with it’s own purpose and getting its own section of descriptions in the book. This is then supplemented by a description of the spaceship from the PREVIOUS mission, which is docked at the station also. After a brief station overview each section has a more detailed map of that portion of the station followed by a description of what goes on in that sector and then a couple of encounters in that section. The feel is something like a hybrid, mixing elements of a setting with encounters. Hmmm, maybe something like a city book could be: here’s this section of the city and whats going on there and here are a couple of encounter you can have in that area. The entire place is really more of an open exploration environment where the players can wander about and get in to trouble while investigating and, oh yeah, hare are a couple of examples of things that can happen.

That description really doesn’t give enough credit to the encounters though. They tend to be fully fleshed out little mini-settings. While reading it over I did get a little … uneasy? about them: the vast majority involve either a bot or fungus creatures. I suppose this can’t be avoided; it is, after all, an derelict space station. Perhaps a little more variety could have been included by including a couple of sub-plots: survivors, bug infestation, crazed programmer ala Jurassic Park, etc. While it’s a two trick pony it’s also a VERY good two trick pony. Each creature feels different and unique. I believe this is critically important to a game; the players have to be kept on their toes by encountering creatures with new & different abilities. A Gelatinous Cube or Mimic is only new once. This keeps the players guessing, and afraid. This adventure does a much better job than other in presenting encounters which feel new and different, even if they rehash some old territory. Murderous doc-bots, crazy AI, security bots, etc, while the tropes are all there the designer does a good job of making them fresh and new again. A packing crate robot that appears time and time again is a good example. The players no doubt expect an attack in the loading dock, but the crate robot (as in a robot made out of packing crates) should be bizarre enough to make them take notice, and the fact that it comes back time and time again adds in a nice recurring villain element, with all the dread and anticipation that entails.

The module falls down in two areas. First is the portion of the station devoted to training colonists. The encounters here feel a little , I don’t know, forced maybe? Trucks, ultralights, ‘shoot the bad guy’ security training, and the like. Following behind this is the robo-olympics section. These sections don’t really feel the same as the rest of the module. It cold be that I’m remembering the bits in Barrier Peaks and an ingrained hatred of training areas gained from bad D&D modules, but I don’t think so. The feel is just off there and the encounters feel forced. Second is the lack of a boss, or solution. There is no great moment when the players will figure out what is going on, no climax or the like. Because of this the exploration feels a bit empty. The players will SEE what is going on almost immediately but they will never figure out much more. Oh, they collect additional details but there is no great mystery here to be solved or secrets to be discovered. I’m left with conflicted feelings. It feels like an empty adventure, but then again it’s also open-ended the way, I suspect, a good SF adventure should be. Not ever adventure needs a climax written in to it, or a solution to what’s going on. Again: the mission is to find out what’s up and report back.

In any event, it’s a good module and I’ll be keeping it.