Cess Pit of the Bogg-Mother 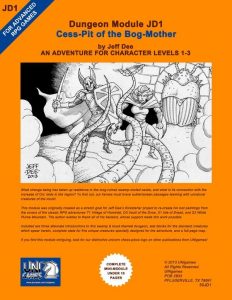 What strange being has taken up residence in the long-ruined swamp-circled castle, and what is its connection to the increase of Orc raids in the region?

This eleven page adventure uses three pages, plus map, to detail a small seventeen room underground dungeon. The descriptions tend to the vanilla+ side of the spectrum, with things little too journeyman for me.

It is always with some trepidation that I review things by folks from the early days. It has been my general impression that they tend to copy their earlier styles, for better or worse. The nostalgia that clouds our memories, combined with the many uplifts in formatting and presentation, can lead to, uh, misaligned expectations. Jeff’s sins are not as major as some of his peers.

There is an odd division here between vanilla and what “cess-pit of the bog mother” would imply. Imagine in your mind those scenes from Aliens that depicted the slime tunnels at the bottom of the complex, full of victims, etc. If you had seen the movie and heard me describe it to someone as “alien slime tunnels” would you be disappointed with my description? The content of this adventure has potential but the writing is weak.

Muddy, tree roots from the ceiling, pools of water, trails of slime … these are some of the elements of the adventure. But it comes across in the writing as: “This is an empty, muddy earthen cave. There are several pools of muddy water on the floor. Roots dangle down from the ceiling.” Okkkkkk…. So, yes, that’s all true. But it is much more fact based than impression based, I might say. It certainly doesn’t overstay its welcome, but it’s also not particularly evocative. When I say vanilla+, it’s what I’m referring to. The writing is generally solid, but not very interesting.

I might also cite a couple of editing issues. Note how that room description beings. “This is an …” A LOT of ofthe room descriptions begin that way. It’s pointing your finger at someone and naming it, instead of using it as some kind of implied potential energy. There’s a lot of “appears to be” and other little “weasel words” that steal the energy from the text and the writing.

Room six, in particular, has issues. This is the big baddies room. Almost a page long, the description is all over the place. I’ve talked about this before, but ONE of the better ways to write a room description is to start with a very general overview of what the players see/experience when they enter the room. That’s the very first thing the DM is going to need when running the room, so by putting it as the first thing in the description you give a nice little overvview for the DM. While the players are reacting to that First Post, the DM can be glanceing down at the follow-on details, perhaps organized with whitespace/paragraph, etc, around the major room elements. But in this room its all over place. You have to read the entire thing to get a sense of what is going on and then process it and then relate first impressions to the players. Uncool for a page long description. The adventures lack of bolding, or even much formatting beyond the paragraph break, is not a positive either. Again, a focus on helping the DM is missing.

There are other small things that set me off. The hag baddie creating healing stuff from a swamp herb … but its only usable if your evil. This is usually seen in the form of an artifact that is only usable by evil folks, but the entire “you can’t but they can” shit is lame. And then other weirdo things like a lack of tracks in the ruins above the dungeon etc. It’s just not very deep in a lot of places that are not specifically “slime monsters.”

The map, though, is fine for being a small one. Not really. It does a good job of showing detail in it and overloads the map with information for the DM. For a small map it’s pretty interesting with its features and loops, etc.

This is $2.50 at DriveThru. The preview is three pages. Only the last page gives you an idea of the writing, and that’s for the wilderness area. https://www.drivethrurpg.com/product/119609/JD1-CessPit-of-the-BogMother?affiliate_id=1892600

3 Responses to Cess Pit of the Bogg-Mother