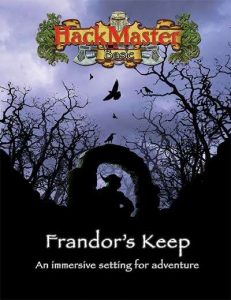 Holding its lonely vigil high in the rocky hinterlands, on the furthest reaches of civilization, sits the military outpost known as Frandor’s Keep. Perhaps you come to the Keep as soldier, merchant, bounty hunter or wanderer, or merely to seek payment for a debt owed (continuing the adventure begun in White Palette, Ivory Horns). No matter, for you are here now, in a wilderness teeming with strange creatures and fraught with danger — the perfect forge for you to hammer your career upon.

This 160 page book is about half starting settlement/regions and about half adventures. Another Keep on the Borderlands, it expands the keep and town and mini-adventures in them/around them, as well as providing several larger Things To Do in the area. The town/keep/region is interesting, the background boring, the mini-adventures nicely done, and the main adventures suck.

The first chunk of this book, about half, describes the regional around the Keep, the town outside and Keep proper. IE: the starting base. The next chunk, about a chapter, outlines (at about a page each) some of the hooks mentioned in the region/town/keep as little mini-adventures/things to follow up on. The final large chunk of the book, again about half, describes some the adventuring locales in the region. The first two sections, though chapter eight (of eleven+appendix) are really quite interesting. It’s focused like a laser on being a starting location. The regiona, town, keep, NPC’s and little side-quests are all well done and relate to interactivity with the players.

SKipping past the background information gets us to the regional information. It is from that point on that the quality level stays high, until the main adventures are reached. It’s all pretty fucking focused. There’s a gembuyer in town. Turns out she’s just an apprentice to the main gembuyer in the keep and she only handles the small stuff. Oh, and she gets a payoff form the thieves to let them know who’s carrying. We’re looking at three focuses, all on the players. You can sell her stuff. She can introduce you in to the keep. And finally she provides a pretext for the thieves to hit the party and some follow up as the party tracks back to her. Focused. On. Play.

To be sure, it gets caught up in its own bullshit a little too much. Background, past lives story, etc, all go on a little too long for each entry. A little bit of the past is enough for the party asking around, we don’t need more unless it impacts play.

It’s hyperlinked and indexed well, providing references to find more information. It FEELS like a living and breathing place, with people having interactions at more than one locale, and being connected to others in different locations. There’s even tips in how to mix in some mundane shit to make it seem even MORE alive, like soldier patrols, woodcutters, and the like on the roads/wilderness. And, there’s an NPC reference chart! Hooray! It needs some personality on it, but it tries. And wandering encounters are doing things! And there are a FUCK ton of rumors, indexed, with context in different situations, all in voice. My Hero!

The last good chapter has a list of minor little adventures and subplots that were mentioned in the main town/region/keep text. Collected in one place, some expanded upon to a page or so outline, describing what’s going on, whos involved, etc, it’s a good way to handle those little side-quest thingies that come up in any large place.

There’s a lot here to steal. It’s a good read, and provides the sort of rich environment, the interconnectedness, that you need in a good town. I also mourn for the person trying to use this. It DOES go on too long with bullshit backstory. This is the sort of place you have to read a dozen times until you KNOW it, as if you created the content yourself. It’s rewarding as all fuck, but shows its age (2009.) It’s remarkable for it DOES provide, as a play aid from 2009, but this is not going to be an easy to use town. I’d love to see it republished using a more focused approach to play at the table.

And then the adventures start. The main adventures. Ug. Long LONG read-aloud text, long rambling room descriptions. Writing that tends to the boring side of the spectrum. Again, the interconnected nature of the things in the adventures are nice, and there’s a certain relatability to things, even a goblin lair, that is a nice realism, but jesus fuck, wading through that text is NOT worth it. A column to almost a page per room is NOT worth it. The challenge is to provide a rich environment while still remaining easy to use ta the table. This doesn’t meet that criteria.

You know, this reminds me, in a way, of the material in the big Rappen book that dealt with the environs outside the dungeon. There was a lot, and some of it quite rich.

Someone asked so I reviewed this. It places me in an interesting position. I don’t review regional/sourcebook type stuff. It’s all fluff and how much fluff appeals to you is a matter of personal taste. A starting base, though, is something else. I was genuinely excited as I read the town/base portions of this and day dreamt of how to incorporate it in to some of the games I am running. Likewise the ad-hoc and small adventures … while lamenting the quality of the main adventures. The first section is a fun read, in the way I imagine some people only read those Adventure Path things. But, its gotta be usable. And it ain’t.

This is $15 at DriveThru. The only preview is one of those “quick” ones, that don’t show you anything but an eagles eye view of the layout. IE: worthless.https://www.drivethrurpg.com/product/116018/Frandors-Keep?affiliate_id=1892600