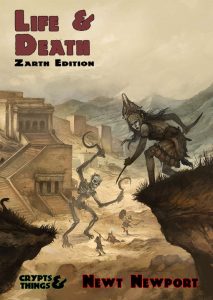 Miraz the Golden sees itself as the inheritor of the old Lion Empire. It is an oppressive military police state which seeks to dominate its neighbours. Some say the wrath of the gods has been brought down because of its hubris and a plague currently strikes it. Its Tyrant looks on from his remote palace, as the victims of the disease shuffle around the streets as newly-risen zombies. While his heirs fight amongst themselves to see who will succeed their father, once he is toppled by the rebellion that is fermenting in the streets. Into this madness step the beginning adventurers, out to make a fortune and a name for themselves.

This 66 page book has three adventures and small fifteen page setting overview. Charming and full of genuine writing, evocative and non-linear yet clear of intent, it strikes to heart of what good D&D is. It also makes you fight it at times to get the content out; not all layout choices are equal.

Folks talk about toolboxes sometimes. Generally that means a bunch of tables and not what I could call an adventure. Sometimes It’s used to refer to things like the old MERP modules. There is something in between the MERP adventures and “normal” adventures and man, does it ever fucking resonate when you hit it. Sandbox is overused. It’s clear from the adventure what is going on and how the players would most likely interact with it, but its not exactly written to that end. Scourge of the Demon Wolf did this, and do did that Garden of the Hag Queen adventure, if I recall correctly. And this/these three adventures do it.

I can’t really put my finger on it, on the writing that enables it. It’s clear when you see it but its not exactly clear to me how its achieved. (Well, at least in the 30 seconds I think about such things,) But man, it’s the RIGHT way to write an adventure like these, that’s for sure. Shit is going on, judgements are not passed, it plays on the players expectations and gives them opportunities. It doesn’t deal with every contingency, but it also doesn’t pander to standard D&D. In addition, there’s something relatable about these things. In spite of the mythic/supernatural/magical circumstance, it FEELs like the real world. Maybe because it’s full of shades of grey and ambiguity … while not giving in to the “fuck over the players” style.

The opening adventure is a decent enough example of a couple of things the adventure does well. When I saw the adventure opened with a page of italicized read-aloud I thought “huh, I seem to to recall that other C&T adventure was good …” It’s introductory, and the party stumble upon a man in the marketplace, colorfully dressed, giving a recruitment speech for the Guild of Treasure Seekers. Break free of your mundane lives, gold, jewels, exotic treasures, travel and far away lands, don’t crawl in the dust and have your parents sell you in to marriage. We are a brotherhood, etc. Free bowl of soup when you join up! Oh, my heartstrings! A literal call to adventure, tt’s a pretext for all those players that seem to need one, and there are about a dozen different ones buried in the speech. It’s does this with a playful wink and a nudge. We’re all playing D&D tonight. Further, the guild is an interesting design choice. I’m usually not down with adventurers guild, but this one is a little different. It’s loose with requirements, gives the folks benefits, like food and lodging, provides the occasional pretext, AND DOESNT BACKSTAB THE PARTY. It also gives the DM a couple of tools, like magic portals, etc, to get the party moving across the game world and interacting with stuff. And then there is a the subplot of the guild hierarchy … but even then it’s not really a backstab. It’s all relatable, to both the party and to the DM as a tool to use, and appeals. It reinforces an Us vs Them thing that leaving your farm life behind generates. There is a bond, instantly forged and not saccharin or forced. And did I mention tha barker starts yelling with the Roll Up! Roll Up! D&D should be fun without a direct appeal to comedy, and this does that.

The NPC’s, which includes the monsters, are all well written. They have goals and motivations and nice little lines about how they all interact with the party. And it does this without overstaying their welcome with mountains of text. There’s also some decent use of bullets and formatting, in places.

The writing is, in general, evocative. Pulsating red star outlines on floors and the like. The scenes and … scenarios? That make up the adventure, the vignettes, events, opportunities, etc, are all … interactive, I guess I would say. And in a way that makes sense. Steal the magic family heirloom and the people in the family react in various ways, all of which should be expected. It makes sense, without feeling punitive.

At one point there’s a captive undead king chained up on a throne. He can turn some villagers from zombies back in to humans. That’s not EXACTLY the goal of the adventure, after all, you’re treasure hunters. But you met the wailing village women … and it does seem like the right thing to do … well, except he wants you to free him in return. And you know, the undead feel relatable, and horrific, the way they did in those Jarl adventures, but even more so. Man, I just love this shit, the relatable stuff and the grey zone of adventuring … without really judgement of the choices of the party makes … just reactions to the choices.

But, it’s not getting a Best Of from me.

For I am an asshole, whose standards are far too high for his own mental good.

The adventure makes use of italics for read-aloud.Combined with the smaller font it’s not exactly screaming “easy to read.” More importantly, though, it makes some quite questionable formatting/layout decisions. Well, more than italics and small fonts. The use of white space and bullets is not really great (yes, I know I mentioned that above as a positive, fuck off.) It doesn’t go far enough. The NPC’s & monsters are in a quite the loosy goosy format that could be tightened up quite a bit, would would help clarity also. It looks like it’s using different font sizes to denote section headings/changes and that DOES NOT work at all. The ability for the DM to place parts of the adventures in to context, to know what they need to know right now, and later, is important, and the small changes in the font used to denote this WAS NOT a good idea. I’m not sure if I’m gonna call this “organization” or what, but there is a tendency for things to kind of run together, sections that is, or, at least, to THINK they are running together while reading it.

This is $20 at DriveThru. Yeah. $20. The reviewer in me, who buys crap three times a week and gets ripped off, sneers at the $20. But, I also always say that I’ll pay big bucks for good adventures. The preview is six pages long and doesn’t show you anything of the adventures so you don’t really know what you’re getting. Bad Preview! Bad!https://www.drivethrurpg.com/product/216476/Life-and-Death-Zarth-Edition?affiliate_id=1892600