WFRP – If Looks Could Kill 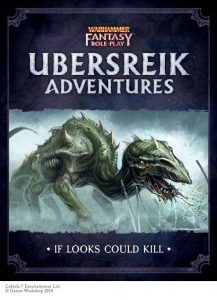 Legends claim the Beast of Ortschlamm stalked the marshes near Ubersreik for centuries. But few believe it… When the adventurers agree to help Rutger Reuter, a charismatic, young merchant from Ubersreik, little do they realise what’s in store. What starts as a simple job guarding building supplies, soon turns to tragedy, horror, and murder. The Characters will not only need their wits about them to negotiate the double-dealing camp of Reuter and his business partners, but also the Beast they have unwittingly stirred…

This 28 page introductory adventure has the party as camp guards during a mill construction. A couple of good design ideas do nothing for an adventure that is meant to be read instead of played. Even among bloat/obfuscation adventures this one ranks high.

You start on a river barge and meet the dude that hired you. The barge overturns and a giant fish attacks. You go to a construction camp, meet the two other co-partners in the venture, and are asked to dig up some standing stones. The dude turns up dead and you’re tasked with following monster tracks in to the swamp. There you meet three villagers who killed the dude & faked a monster attack … being attacked by a real basilisk. Coming back to camp one of the co-partners has stolen the paybox and the other was behind hiring the crooked villagers to kill the dude. IE: two fights and a little roleplay.

This is published in the Warhammer Fantasy Roleplaying Product Identity Style. Which means a shitty font that’s too small and lots of italics for read-aloud. I can do without the font with legibility issues, the tony font, and the italics. All three make you feel like you are fighting the adventure to pull content out of it.

This is exacerbated by the FUCKING AWFUL organization of the text. Long paragraphs with details buried in them and seemingly endless number of them. It is CLEARLY laid out to be read and not to be used at the table. Bullets, whitespace, headers, organization, things to draw the DM’s attention to them while scanning … all are missing. It’s just one big text blob.

The NPC are organized like shit, two pages for the opening scene with your new employer, the co=partners mixed in later in their own shitty long text paragraphs. It is, essentially, a linear adventure with a couple of roleplay scenes separated by a couple of combat scenes. I don’t find that format particularly compelling and wish it would have taken a more open ended approach

It does do a decent job of presenting some dialog in the NPC’s voices, although better NOC formatting would have made this much more additive to their personalities.

It also does something pretty interesting with a skill check to find some treasure. An astounding success gets you the treasure. All other successes get you the treasure also, but with increasing difficulties. This ranges from rumors around the camp, or a pickpocket, or your employer showing up and watching you like a hawk. Turning the roll in to an opportunity to roleplay and add roleplay complications is quite good design.

It’s too bad this is so shittily organized/written to be read instead of played. The double/triple cross stuff with the partners is interesting, as is the digging up of the standing stone and some of the roleplay possibilities with the workers, the swamp villager crooks, etc. While a small and simple adventure those elements really elevate it. It’s just SOOOOO hard to wade through the text. At this point the product identity is just mimicking shitty cost-based choices form the 80’s and is not a detriment to the line.

This is free on DriveThru. The preview is four pages. The last page is the best example of whats to come. The italics, wall of text, etc.https://www.drivethrurpg.com/product/259270/WFRP-Ubersreik-Adventures–If-Looks-Could-Kill?affiliate_id=1892600

7 Responses to WFRP – If Looks Could Kill