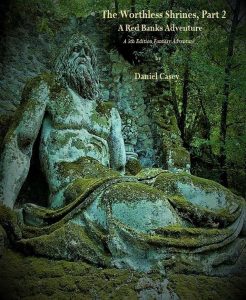 A promise from a mysterious mage, to grant any Wish if they discover the mysteries of long forgotten civilization, sends a party of adventurers into the far north…

This 36 page adventure depresses me. It’s a linear plot-based thing, full of forced combats and do-nothing skill checks. Yeah, I bought it because of the cover, but I’m a stupid sucker for marketing and can’t ever learn my lesson.

First the goo, and it comes in two parts. The hook here is that you’re hired by a wizard professor to research/explore some mounds, with a Wish spell for each as a reward. Woah! That’ll make me sit up and take notice. post-oD&D doesn’t give out enough wishes. Neutral D&D means killing players, far more often than happens these days. But it also means resurrects, geas, and wish spells should be more common. Professor Dipshit is a moron, wanting to gain knowledge to rise on the colleges ranks … which appeals to me as an academic and as a guy who plays a lot of wizards makes me think “if you can cast five wish spells in a row, why not just wish yourself some knowledge/tenure?” Premise aside, the rewards are great. It’s the kind of hook that motivates the players rather than the characters, and those are the best kinds.

The magical treasure is also above average. Shambling Mound tap roots, a coutl feather, a faerie dragon wing cloak … they are mechanical, with advantages on saves and so on, but they also don’t drone on with multiple paragraphs of text describing them; one or two sentences and they are done. There’s an emphasis on monster parts, which both appeals to me and makes me wonder how many players still mine them? I suspect they will need some prompting.

Nothing else positive to say.

There are no maps. The directions and descriptions are all embedded in the text. This is shitty. A map is a wonderful thing, even a diagram/drawing would have oriented the DM better. As is, you have the text to find information. Here’s two examples of how the text attempts to provide a map: “Entering the mound, the party will immediately see several chambers branching off the central hall that meanders the length of the barrow.” and “The left chamber has two stone platforms upon each is a well- wrapped, ancient looking corpse.” Dude, just a picture with a pencil and include it. That would have much much clearer.

Finally, what would a shitty adventure be without meaningless skill checks? Not as shitty, self-evidently! Make a DC12 check to notice the path is getting overgrown, even though it becomes impossible to move through. Make a DC12 to follow a bears path .. or don’t find the pool of water you’re looking for. Make a DC15 to notice that …” they will realize the bear hadn’t just fought them making its way to the pond and that the plants around them are corrupted.” Actually, I have no idea what that text is trying to say/do. A satyr (who runs the bar in town; magical ren-faire much? I thought the world was supposed to be full of wonder. Next thing you know Drow will sleep on pallets and wool blankets) digs up an egg and you need a DC15 for him to explain what it is. What happens elsewise? Who knows! The adventure doesn’t continue!

It’s all confusing and not through out AT ALL. The satyr digs up the egg, but then it somehow becomes party treasure. What? SO he placed a shambling mound to guard it and then just gives it to the party, I guess. Oh, and there’s a magical couatl grove somewhere next to town, where the next part of the adventure takes place. But the Kenku village the town lawman is worried about gets no more mention. WTF man? PROVE RESOURCES TO THE DM. It’s the first rule of adventure design: help the DM run it.

I could bitch about a thousand small things, like including full stat blocks for NPC’s the party will probably not stab while choosing to bury their personalities in the text. Orient the adventure to the DM. If they are unlike to stab it then put it in an appendix, or summarize it, and put the fucking personality in the stat block so it stands out to the DM.

“4 will o’the wisps attack.” Really? That’s what it come to? A will o’the wisp is just a monster to hack down? There’s no soul. No leading them to the quicksand, or the dwarf smelling gold (one of my personal favorite will o’ moments I’ve seen.) or ANYTHING romantic or adventurous, just something else to stab.

Let me suggest that “kill the monsters and take their stuff” is a much more fitting tagline for modern D&D than it is for older styles of play. Older D&D embodies a spirit of romanticism that Blue Rose can only dream of in tortured opium visions.

This is Pay What You Want at DriveThru, with a current suggested price of $1. There’s no preview, otherwise you’d never but it. Worthless indeed.https://www.drivethrurpg.com/product/257474/The-Worthless-Shrines-Part-2-A-Red-Banks-Adventure?src=newest&filters=45326_2110_0_0_0?affiliate_id=1892600