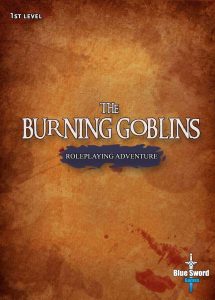 he most recent raid by The Burning Ones goblin tribe has left the village of Greendale in a state of uproar. The miller’s daughter has been kidnapped and the mayor has put out a call for adventurers to hunt down the goblins and find the missing girl. But is there more to these raids than meets the eye? Why are the goblins burnt and timid? Only a strong band of heroes will be able to find the answers and save the girl from a gruesome death.

This is a fourteen page adventure in a goblin lair with a dragon in it. Massive reaD-aloud, lame treasure, “maps as art” …is this really mainstream D&D?

The party is dumped in to the adventure, rescuing the millers daughter from the tribe of goblins that raided the nearby village. I guess the local manorial lord is absent again or can’t be bothered, so the mayor has the party dp the job. Seriously, what’s the point of taxes? It being local elections, let me note that the job of the mayor is to fill the potholes, remove the snow, time the traffic lights, and keep goblins from abducting important peoples daughters. I’m absolutely certain is a chaotic good act for the party to depose the mayor and collect taxes themselves. They can’t be any worse than this guy … who doesn’t actually exist except as an abstract concept in the column long read-aloud.

Well, there is an option for having the party hang out in town. You have to succeed in a skill check to have the townfolk tell you anything. a) this is stupid because the party are helping the townfolk. b) this is stupid because what are you supposed to do if they fail the roll? Oh, you’ll just fudge it and tell the party anyway? THEN WHY NOT DO THAT IN THE FIRST FUCKING PLACE?!?!?! It’s like the designers don’t actually think about or run their own adventures.

Back to Ye Olde Reade Aloude. People don’t listen to read aloud. WOTC even write an article about it. Two to three sentences is all you get then people stop paying attention. And yet, adventure after adventure does it. Why? Because they learned that it’s the”right/” way to things from others … including official product. Hey, Mearls, how about fixing this? Don’t Adept anything that uses more than three sentences of read aloud. Then people will learn new behaviours and I’ll have to find a new reason to drink. Like the crushing realization that life is meaningless. I think that’s traditional, anyway.

So … the goblins live in a cave. The cave is a linear map with six rooms. That’s fun, right!!! Linear! Six rooms! Oh, and there’s no grid, it’s just a “pretty” art piece. I say pretty because its not. Seriously, what was the point of the map? You know … the fucking pit trap isn’t even on the map. That’s right, the big old X is missing from the map. Who the fuck doesn’t put the pit trap on the map? Someone with little concern/knowledge of how to help the DM at the table, that’s who.

The tunnel with little no value items in it has a magnifying glass, a greatclub, and healing potions. Uh huh.

Who wants to guess how many goblins are n the goblin tribes lair cave complex? No, zero is wrong. It has four. Three at the entrance and one old frail goblin inside. That’s it. That’s a goblin lair. Those are the goblins that raided the village and everyone is in fear of.

Oh, the cave does have their leader in it, a dragon. Yes, a large dragon. That’s the goblin leader. He’s in the cave.

I’ve seen this in other modern adventures and have not commented … whats with slapping high level monsters on low level adventurers? Trolls at first level, etc. When do people fight skeletons? Is harryhausen dead? Why are you putting a fucking dragon in a level one adventure? Why not just put asmodeus in and call it a day? Is it the 5e power curve? I don’t get it. What happened to stirge and fire beetles? No, I’m not being old, I’m talking about power curves and character growth. Oh, and the dragon knocks people unconscious. WTF man?

Yes, you CAN sell out the villagers and offer the dragon tribute, and even gain the dragon as an ally in the future. THAT is genuinely a good thing.

Perhaps my greatest disappointment in this adventure, which is full of them, is a certain magic item. The only one worth mentioning. A disk, with writing in infernal, on how to soul bind to create soldiers for the “Grand Army.” And that’s it. It’s not actually a magic item or has value. The dragon knd of wants it, if it knows the party has it. That’s it. Man, what a lost opportunity. Let the fucking make some zombies man! Or grow some! What fun!

Just another adventure from someone who didn’t actually think any about their adventure.

This is free at DriveThru. As such I’m too lazy to talk about the preview.https://www.drivethrurpg.com/product/156433/The-Burning-Goblins-Old-Version?affiliate_id=1892600

3 Responses to (5e) The Burning Goblins