The Castle that Fell from the Sky 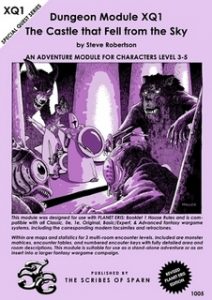 Even in the far gulfs of space, the struggle of Law against Chaos, Good versus Evil is eternal. But wherever evil is not extinguished, it will revive to exact vengeance on those who would keep it at bay… …On the fringes of the realm, where civilization wanes and adventures begin, rumors are whispered of a castle that fell from the sky. Some say it has poisoned the land where it fell and nought but death can be within its walls. Some say creatures, foul and dangerous, have gathered at the dark fortress. But others, the treasure seekers and thieves who haunt the local taverns, scoff at such dire warnings and view them only as a thin ploy to keep adventurers from winning the vast treasure that surely waits within. To your ears have come these very rumors— and more: you have learned the location of the fallen sky-castle!

This fifty-two page adventure contains a multi-level funhouse dungeon with about forty rooms. A good mix of OD&D elements, it manages to mix a more light-hearted style in without it becoming silly. Classic elements abound. Both in style and in presentation to the DM, it reaches acceptable levels. Since my standards are stooopid high, this is a compliment.

Being OD&D-like there are lots of new creatures and treasures. The guards that have fish-heads can blow giant bubbles that, if they touch a magic user, deletes a rando spell from memory. Giant mosquitoes roam. A snake with a single cyclops eye. Note how familiar the creatures are. It’s a normal thing, just twisted a little bit. Freaky enough, or more, because you KNOW it’s not right, as a player. That fucking snake has one eye man … I ain’t going over there! Treasure tends to be similarly unique. We can extrapolate this in to “the OD&D style.” It’s not all over the top nuttiness, in creatures, treasure, or room encounters. There’s something familiar about them. It’s a basic thing, pushed and twisted just a little bit. Familiar enough to have some recognition but it’s that extra little twist that pushes you in to freak out/caution territory. It’s a great vibe and totally by bag baby.

Speaking of rom encounters, let’s look at one of them:
“TOAD IDOL: Against the east wall is an onyx toad idol with a sinister grin and a single ruby eye. The ruby is a deep blood red and has a strange gleam. It is cursed. If anyone removes the ruby, the stars of the sky appear on the ceiling and slowly descend upon the thief, covering him in a green-black shimmer. That character is now cursed, and all rolls will be considered a 1 until the ruby is returned.”

Pretty terse. Not the most evocative, but blood-red and gleams and green-black shiffers are a cut above the descriptions most adventures have. It’s a pretty basic setup: the cursed eye-treasure statue. It’s the onyx toad and stars appearing that really push this up in to great territory. And yet .. it’s so simple, isn’t it?
So far it’s a pretty standard adventure. Put the first room has a big red button with a sign that says “do not push the button.” And there’s a leprechaun-like creature called Barbar Jinx that can show up when you say his name three times aloud and uses “meesa” and “yousa.” There are other examples as well. This is really the tonal part that completes the definition of funhouse: a couple of pop culture things tossed in has always been a hallmark of the style. I kind of enjoy the fucking around nature and having a good time, but I recognize that as a tonal thing not everyone wants.

There is, of course, room for improvement. There are great summary sheets, but a little bit more of them, like having the wanderers doing something, would have been good. It also seems like there’s just a little bit more missing from a lot of encounters.

How much instruction/guidance to the DM are you looking for? The modern trend of “all DM’s are idiots and I must spell out everything” is something I abhor. On the other end of the spectrum is no advice to the DM at all. Just let the DM run it however they want.

Note the toad room from earlier. No treasure value for the gem, and no mention of a save for the curse. There’s another room that has a brazier in the center that “fills the room with fire” when the opposite door is opened, 1d6 per turn. Is there a save? Instant or slow enough that, say, you could get one turn to run out of the now opened door to save yourself if thats the first thing you tell the DM? It’s ALL up to the DM to interpret and run.

I get the style, and it’s fine; I’d much rather this style than the “explain everything” style. I get excited when I run the game, so little cue’s to help me not forget things does a wonder. Just putting “[sv]” would be enough. Or “(10,000gp)” or “instantly” vs “slowly” would help me out.

It’s a good adventure and I’d have no issues with running for folks.

This is on Lulu for $6. Lulu previews require flash. I don’t do flash.
http://www.lulu.com/shop/steve-robertson-and-jimm-johnson/the-castle-that-fell-from-the-sky/ebook/product-23854671.html

By the time you read this I’m fucking around in Central America for a month. Every review after this one, for the next month, means I was a good boy and wrote ahead. We shall see …

6 Responses to The Castle that Fell from the Sky