(5e) The Deadly Den of the Wanton Wolf 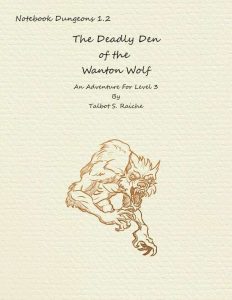 The people of Yarlstone are afraid to go into the woods at night. It started with an increase in poaching, but soon merchants and guardsmen were found dragged from the trails and torn apart. A bounty has been placed on those responsible, but who is brave enough to investigate the howling that comes with the full moon?

This twelve page adventure features a small cave system of eighteen rooms with a werewolf in them. Terse and largely evocative room descriptions are a highlight, but slavish devotion to regimented formatting brings the product down, as does the lack of supporting material for creatures and setting.

5e and twelve pages would normally mean a shit product that describes three encounters, maybe … at least that’s what I’ve come to expect. When I saw this was single column I was looking forward to a total shit show, but I was pleasantly surprised. Instead of a shit show rip off product (ie: three encounters or less) it is instead someone with a vision who needs some help improving.

The rooms (in an old cabin) have descriptions like “Living Room: Dim. Creaky floors. Dusty tables and chairs, Cold Hearth. Old rugs.” or “Closet: Dark, Musty, Moths, Worn cloaks on wooden pegs.” That’s pretty good! It DOES create a great atmosphere that a DM can then fill in and riff upon. That’s what a DM needs, just enough to get an idea in to their head, then they can expand upon it as the players explore and ask questions. You grok the place, and because of that you have infinite power over it to convey the vibe to the players. It’s easy to scan at the table and does what it needs to do. I like the style, a lot. It’s not the ONLY way to achieve the evocative & terse thing I look for, but it is one of the simplest to understand and mimic for n00b writers, I think. The room names could have been overloaded some “Decrepit Living Room” or “Musty Closet”, for example, but hey, that’s nitpicking.

And …. I’m done being nice. The rest of this adventure barely exists. It is, essentially, minimally keyed. Rooms have “5 cultists + 3 wolves” or “2 black bears.” Treasure is boring old book stuff. There’s no real reason behind things. There’s some pretext about the werewolf being a bandit, and a wolf cult, all relayed through backstory, but the adventure keys proper are as close to minimal as you can get. Take Palace of the Vampire Queen and add those atmosphere descriptions and you’ve got this adventure. The creatures and environs come off as cold and mechanical. The creatures need to be doing something. The traps need a bit of life. There’s tis devotion to the rigor of formatting that’s weird. Rooms have a section stating “Doors: Slatted wood fencing – locked.” And then, each on a newline, “Pick: DC 14 Dexterity Check” “Force: DC14 Strength Check” and “Break: AC15, HP27.” Ok, get it. I get what you’re trying to do. But it comes off as rigid and mechanical and lifeless … and also takes up too much space. Imageine putting it all one one line, with bolding, underlines, italics, bullets, etc. Same impact to support the DM’s scanning and more fluid.

Further, imagine the doors, traps, treasure, and monsters were given the same treatment as the room atmosphere. Just one sentence of atmosphere each. There’s not village, or wilderness, but imagine that a village was listed, with the same one or two sentence atmosphere, along with, say, three NPC’s given the same treatment. And a little wilderness section of the same. As is, the hooks are essentially non-existent, just that there is this bandit cult leader and he lives in the woods and the nobles don’t like poachers. But give that the same atmosphere treatment? And those wandering monsters? Same thing. Instead of “1-2 black bears” how about instead “1-2 black bears, foraging, wounded, starving” or something like that? Then you’ve given the DM just a little more to work with.

Also, would it kill you to put in a one page summary of monster stats? You use the same thing over and over again … why not fill one page with their stats. Just a summary, so the non-pedants among us can run the monsters from it?

Finally, a note on formatting. Yeah, it’s part of the Notebook Dungeon series and you put it on a background that looks like a legal pad, single column. First, don’t use single column. It sucks for communicating information. I know it’s fucking easy, but its been well established that double column is better for information transfer. Easier to scan up and down than left to right. Yes, I promise, some google searches will turn up the lit. Second, the legal yellow and lines don’t improve the legibility of the adventure, they detract from it. It gets in your eyes way, especially the lines. Don’t do that. (Just like you should not have large sections of italics. Its hard to read.)

Nice idea for the rooms, but it went too far minimal.