The Beasts of Kraggoth Manor 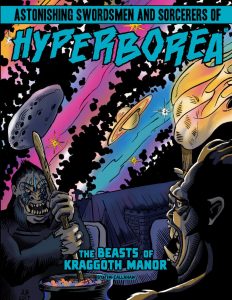 Your party have travelled northeast from the great city of Khromarium, through the unforgiving expanse known as the Lug Wasteland. You undoubtedly seek greater riches in the north: ruined tombs secreting ancient artefacts, deep caves filled with long-lost Atlantean technology, or strange villages built atop sacred Hyperborean burial grounds that brim with pre–Green Death treasures. Finally, after having emerged from the treacherous bogs, you set up camp on a craggy outcropping that provides dry land and a modicum of protection from the crawling unknowns. Straightaway your attention is drawn by a nearby light source, a fire not more than a hundred yards away. Through the cacophony of croaking frogs, buzzing insects, and hissing slimy things, a shriek of pain knifes through the air.

This 52 page adventure describes a manor house with 35 rooms that is stuffed full of things to stab. Some decent rumors and magic items are added to encounters that have a certain life and interconnected nature … that the signature North Wind “lets fuck this up by writing a novel instead of an adventure” style is then added to.

I thought this time it would different. A North Wind adventure not by Talanian could be an interesting thing. A different take than the creators, using the same reskinned AD&D setting but brining a different style. How wrong I was. I guess AS&SH self-selects, or Talanians hand as co-developer is too evident.

I’ve got a certain amount of respect for someone true to their vision, even if that vision is WRONG. I see this time and again, and suspect its true for Advanced Adventures as well. It’s good to have a vision but you need to know when you have blinders on and do something about that. North Wind in general, and this adventure also, tend to focus on a novelization sort of description rather than a playable description. And, comic book guy, don’t be a shit; “playable” doesn’t mean boring. I’m fan of archaic words, nonsense words, tearing gramme apart, and so on, all to the end of creating an evocative environment. At first glance this adventure does that. You can certainly find a lot of twenty dollar words and archaic sentence structures. But it’s sin, I believe is in putting those before playability. What’s more important, creating an evocative environment or playability at the table? If we accept “evocative” then we justify 10,000 word room descriptions. We we accept “playability” then we leave ourselves room for both, the evocative description is important, but it must be a slave to playability.

These are the sins of Paizo, and North Wind in general, and in which this adventure seems to fall into. The actual keys are only about twenty pages long, averaging one or two a room. Backstory and timeline are enumerated, and wilderness encounters get a page of text, or at least a column.

The first sentence of room four, of the manor, is “Though far less barren than the area immediately outside the crumbling defensive walls, …” Nite the indirect passive writing style. Perfect for a novel, a love letter to the Appendix N heroes of North Wind, but absolutely shitty for playability. Long descriptions in passive voice, writing in a backwards style, forcing archaic word choices that are dry instead of vivid. We’re left with an adventure full of thralls and apen-men that somehow comes off as boring and dry.

I will say that, in places, it almost seems like two separate authors. The entire wilderness section is a mess, full of these column long novel descriptions of rooms, and this carries over in to certain parts of the manor. But other parts of the manor seem terse by comparison, only four sentences per room. Here’s room 3A “The smell of rodent urine consumes this area. In the southwestern corner, stairs spiral about a newel up to the first floor. The northeastern corner is piled with sand, leaves, shredded rope, tattered cloth, and other debris in a three-foot- tall, five-foot-wide mound, where rest 6 giant rats. The rats exhibit timidity and will retreat deep into the debris at the presence of men, but if the nest is poked or prodded, they will react violently.” That’s not so bad. Needs a little formatting and whitespace to fight some wall of text issue, but ok. Smell hits the party first, a basic description that’s not half bad with tattered and shredded things, and then the monster reactions. Not rock star, but not enough to botch too much about. But that room description, and others like it, stand in stark contrast to the columns of text that seem to consume other rooms, as well as their overuse or archaic structure.

I like the setting, a manor besieged by ape-men, evil folk and creatures inside, and it’s got some non-boring magic items mixed in and an encounter or two that are more than ok, with the vast majority being imaginative enough to handle an AD&D style. I just wish it were playable without making struggling over the text and highlighting it.

The rooms have some interconnectedness, or at least some theme areas, with thralls, apen-men and so on all being around in certain sections … always a great idea. But the initial description of the outside doesn’t dwell on the ape-man sige, even though their are all about outside (on roofs) doing weird things. The party needs to see the shaem on the roof with with bubbling cauldron at the start, not have that part hidden in text deeper inside the adventure. “Let’s see, what do you see? Hang on, let me look through every room description and check and see what you can see from outside …”

It’s also more than a little hack-y. Essentially, everyone is an enemy. The evil ape-men are trying to stop an even greater enemy, but, hey, ape-men. The thralls look friendly, but attack. Shit gets old fast.

Do you just read D&D books instead of playing? Great, buy this.

This is $10 at DriveThru. The preview is worthless, showing you nothing of what you are buying.https://www.drivethrurpg.com/product/248580/The-Beasts-of-Kraggoth-Manor?affiliate_id=1892600

12 Responses to The Beasts of Kraggoth Manor