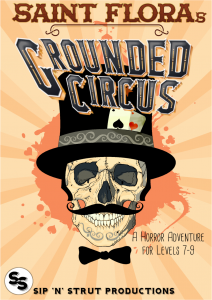 The circus is in town and with it is an settling group of carneys. The show in the big top where death defying acts all seem to be going wrong is cut short and the audience leaves in silence. Without any clues to follow, the party must look to other attractions for clues. Egghead the clown can be heard from the funhouse in Mirrors and Mazes. A crippled carnival barker lures passersby into Sinisterio’s Hall of Curios. A silent and hulking mass of a man pulls a cart through the grounds advertising the Haunted Hayride and Scavenger Hunt. All the while time slips away, half remembered. Can you uncover the mystery of the circus? Can you get out before it gets you?

This seventeen page shitshow of an adventure (Leading the witness!) has the party forced in to being trapped in an extradimensional circus. You hang around for awhile and then get sent home, with everyone dead being brought back to life. So, basically, a shitty “it was all a dream’ adventure. (Again, objection! My Lynch seems to be saying the adventure is shitty because it is shitty. – Overruled, and go back to your Critical Role ‘Story’) This adventure makes a lot of bad decisions.I don’t recall if it makes any good ones. Let’s generalize and say “it has no redeeming qualities.”

First, “it’s all just a dream” is going on. In this type of adventure nothing has any consequences. You wake up (or, in this case, come back from the demiplane) and you’re generally ok again. Dead people come back to life. You keep some treasure or an effect or two in some of them. The main thing though is: your decisions don’t have consequences. It is, in effect, just an excuse for the DM to fuck with you. Arbitrary shit happens and then you go home. Gygax was kind of being a shit when he said you can’t have meaningful adventure without keeping track of time, but I would instead say you can’t have a meaningful adventure if your decisions have no consequences. (Yes, I know what he meant. Fuck off pedant.) You gotta have some skin in the game, and dreamtime adventures don’t have that. Usually mostly.

The very first thing you encounter as a player is some read-aloud. It’s under “opening act” (which makes me throw up a little in my mouth, but whatever. It’s a pretentious tonal thing.) Here’s the opening read-aloud: “You’ve gotten news of a circus just outside of town. All of the derring-do has worn the spirit down and you remember wanting to have a fun night out. Take in a show. Eat something greasy. Your memory is hazy on how long the walk was to get here, must not have been too strenuous.” Note that third sentence, “Your memory is hazy.” At that point, as a character, I don’t care any more and have checked out. It’s means “dreamtime” and that means I get to be bored for the next four hours, enduring arbitrary DM bullshit I will have little impact over. (Also, for the record, I feel a little shitty calling this shitty D&D adventure subgenre dreamtime. Yes, for all the reasons you would imagine. Still, I shall persist.)

Arbitrary you say? Arbitrary I sez! The key to getting out of the demiplane of circus is … the arcanololth in charge decides to send you back. Oh, hmmm. Yeah … ARBITRARY! “He doesn’t want his little demiplane playtime interrupted by chaotic adventurers.” or some such. uh huh. WEAK DESIGN. I think you mean. And, ultimately, of course, if you did you just appear back on the prime at 1 HP at the end of the adventure. No consequences. Arbitrary. That’s shitty unimaginative design.

The mechanics of the writing and organization are not much better. Maybe worse. Action, much akin to watching a play, takes place in long paragraph form. Sit in the stands and watch the big top means “DM wades through text saying that this happens and then this and then this.” Bullets people. Distinct paragraphs. Use whitespace. Organize it so the DM can, at a glance, figure out what is going on without actually READING a paragraph of text, fighting their way through it to try and find the next relevant bit of information. Bad Bad Bad.

Oh, what else. It seems in vogue these days to abstract mazes through the use of playing cards. This is the second one I’ve seen lately, which means WOTC must have published something that everyone is cribbing. I get the concept but, again, it comes off as arbitray. “Just make a bunch of skill checks.”

You know, related to many modern adventures, and this one in particular: the story is NOT yours, as a DM to tell. I know, i know, people say it is. That’s a common thing. Those fuckwits are WRONG. Yeah yeah, onetruwayism, whaever. They are wrong. The story belongs to the players. Their choices are what the game is about. As a DM you get to react to them and synthathize it through the lens of the adventure, but its THEIRS not YOURS. Maybe think of it as you, the DM, writing the villains story. (Then cut out all of the trivia and nonsense backstory, focus on things of import to actual play.) You want to write the villains story right up until the time the speeding freight train otherwise known as The Party runs in to them. The villain has plans, he’s doing things, he’s making an impact. He’s going the distance. And then he’s caught in the middle of the railroad tracks.

This is $3 at DriveThru. The previe is too short, but the last page shows you the crappy “this then this then this” attempt at describing a scene.https://www.drivethrurpg.com/product/254897/Saint-Floras-Grounded-Circus?affiliate_id=1892600