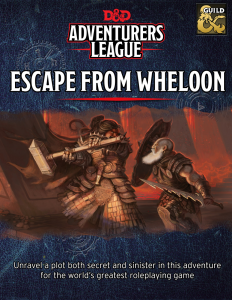 The walled city of Wheloon holds the criminal population of Cormyr. The residents
of that place are bound to it forever and cut off from the outside world. Inside, plans
are made and malcontents pool their resources – and outside, forces influence the
innocent to ensure that a dire plot can be realized without interference from the
knights and mages that guard the realm. Now you’re here with no memory of what
brought you to Wheloon, and all you can think of is finding out why!

This twenty one page town adventure sets new lows in adventure design. At the same time both railroady, taking away player action, and plot-based but with no fucking plot points. The usual issues with organizing the town incorrectly and useless detail. Lipstick on a pig indeed!

This is an Adept level DMSGuild adventure, an endorsement from WOTC of quality.

You wake up in town with no memories. You wander around, almost literally. Four scripted events happen. You somehow figure out how to get in to a smithy and have a fight. Done.

There’s nothing wrong with scripted events. They can add flavor to an adventure. There’s nothing wrong with THESE scripted events, at least in theory. In practice, just about every bad design decision that could be made WAS made. They are generally aimed at one of the members of the party and at the end of it you regain some memories and get awarded second level. Yeah, ok, I’m not going to quibble with that. But … in the very first one the PC has to make a DC 14 animal handling check. If they succeed they get the level award. All of the others just award the level. So, if, out of the blue, the party member decides to do an animal handling on a attack dog they MIGHT get a second level. I don’t mind this as a true award, but its written so you get some memories back if you do it, as well as the second level that everyone else is going to get. It’s bad design.

And in another some rando guide just has rumor dialog out of the blue. It’s just inserted and stuck in to the encounter. No intro. No NPC name. It’s a guide for fucks sake! But it’s written like … I don’t know. First it’s written as a guide. Then there’s this rando rumor dialog. Then there’s this implication that the guide just runs off. It like someone yanked out random sentences or paragraphs and those explain what’s going on.

And the railroading! It starts immediately. The DM’s announces that one of the PC”s has found the parities gear in one of the chests in the decrepit room they wake up in. WTF? Hey, that’s the parties fucking decision! Fuck the story your telling! It belongs to the players not the DM. And then when you walk outside you’re just told you’re in the city of Wheloon? And then you get to all make a CHR check and if you succeed you can bribe the guards. Again, WTF? Why the fuck are you dictating the hows and why of the parties interaction with their environment? Persuade, bribe, intimidate, there’s an near infinite number of choices … but the DC check is written out of the blue.

This happens over and over again. It’s like You’re sitting in an inn and the DM calls out “ok, everyone make a Arana check! Those of you who succeed channel the elder force and gain a level!” Wait, what? Why the fuck are we rolling? Shouldn’t the party ACT and then ROLL for success? (And that’s not even taking in to account the OD&D method of trying to succeed WITHOUT rolling.) The whole “ok, every roll for [esoteric skill] and lets act like you just used it” is nonsense, and happens repeatedly. It makes no fucking sense. In another place an NPC puts a ring on a party members finger, and then later takes it off. Uh, no, thank you very fucking much. How about you just roleplay my entire PC for me? How about you just roll a d6 at the start of the fucking night and on a 1-5 we win and on a 6 you roll again? YOU DONT TAKE AWAY THE PARTIES FREE WILL. Even for something that trivial. “Any character may attempt a wisdom check” … but why the fuck would they? You have to give the party some cue to interact. It’s like there’s no fucking roleplaying anymore.

Further, there’s no plot seeds, as far as I can tell. I guess you are supposed to remember something (when you roll a 1 on a d20, how many fucking times are you rolling the dice in this thing?) Somehow you’re supposed to figure out you go to this pond. And somehow you’re supposed to figure out you need a certain key. And somehow you need to figure out that the key is placed on a stone at the pond. There’s exactly one clue, I think, in a huge town map, that the pond is important. Third, the key you need is in building 8 with some duergar, according to the pond entry. Entry 8, though, a porter, has no mention or duergar OR the key. How the fuck did that make it by the editor? Oh, wait no, one of the scripted encounters is supposed to be there and IT has the duergar and THEY have the key. So, you mean, you meant the scripted encounter and NOT the fucking porter?

The town entries are numbered and there are 25 or so. Really? That’s the plan? That may be the shittiest way possible to organize a town. Yes, I know everyone does it that way, mom, bridge. What’s the plan with this? That somehow someone is going to want to go building 15, out of the blue? [Aside: entry #15 is labeled “Hawkmaster, a falconry.] Maybe they are looking for a falconry, and you should label it “Falconry?” Maybe you should arrange them alphabetically, by usage type? Are the party likely to go to the Bleue Beard Inn or are they likely to go to the Purple Dragon Knight HQ … which is in the inn? And the sites are almost all chosen at random … there’s no real rhyme or reason to most of them being included in the adventure. I mean, the mill? Seriously? Why the fuck would the party go there? What makes you want to include that entry over, say, the scribe?

Ok, a few good things. The big bad guy is rumored to be morbidly obese and cause people’s eyeballs to explode. THAT’S good detail. And the old mill, while useless, is rumored to grind other things at night … THATS a good bit of forboding. That’s about it. Most of the detail given, and the town entries are written in a useless meandering style. Trivia. “The identity of Lord Sarp has been lost to the decades” Perfect. Why the fuck does the party care about that? “Situated at the western end of the ferry that brings the convicted into Wheloon, the Wyvern Watch Inn serves as the receiving house for all new residents.” I FUCKING HATE THE SIBBY!

This morning while watching the Conan cartoon the voiceover said Conan battled the cruel wizard Wrath-Anon. I turned to The pretty Girl and said “don’t they mean: Warth-Anon, the wizard who sometimes does cruel things?” The designer and editor (copyeditor?) may not be bad people, but this effort is bad. VERY bad. You can tell what they wanted to do, but they fail at nearly every aspect of it.

The goal is to write something for the DM running it at the table. Terse, evocative, organized. This things needs ALOT of work to get there.

This is $5 at DriveThru. The preview is three pages and utterly useless, showing you nothing of the adventure or the writing.
https://www.dmsguild.com/product/251922/Escape-from-Wheloon

3 Responses to (5e) Escape from Wheloon