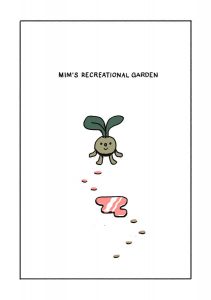 The Garden is some sort of self-preserving magical botanical zoo, an attempt at avantgarde entertainment for kids – it never opened to the public, but it still works.

This twenty page adventure describes a fourteen room dungeon right out Adventure Time. Candy colored weirdness closer to Willy Wonka than the Silmarillion, it presents an interesting environment to adventure in. It’s also gota touch of the “adventure as a walk-though museum”, ala Ed Greenwood, can be confusing to decipher, and maddinley abstrated. It’s hard to recommend because of that, but it sure is interesting as all fuck.

We’ve got a wizard’s lair here, and this time a wizard interested in plants. It’s laid out in a bunch of rooms that are more garden like than dungeon like. Inside we’ve got a bunch of happy singing tree people, bumble bee people, fungus men, and so on. It’s not quite cartoonish, but does lean that way more than it does to those mean old vegapygmies of S3. That means it’s the new fresh material that was common to Psychedelic Fantasies and OD&D in general.

The common elements of “things to fuck with” is present also. The seasons can change in the rooms and/or dungeon and that impacts the things around it. Several rooms have crystals, or other things, to play with. Interactivity is a key aspect to dungeon exploring and this brings that. Doors triggered on specifical elements, and tunnels in the walls that lead to strange new, and/pr random rooms, also help bring in an element of the weird and unknown. I’m such a fan of these additional elements being tacked on. The rooms feel stuffed.

But they are actually pretty simple. Two or three bullet points generally describe the rooms, with certain exceptions being made for those long rando tables. It’s pretty easy to scan and figure out the specifics of the room. The map also helps here, color coded for floor condition (mud, wet, slime, etc) and light elements in the room.

There is a fuck ton going on in this and its also hard to keep track of. While the rooms are easy to scan they also rely, heavily, on overloaded information presented in the general information before the keys begin. The slimes, fungus, seasons, trees, light, wet … it’s all a little hard to keep track of what SHOULD be going on. The single column format doesn’t ease comprehension, but I think the major problem is … English, and/or the lack therefore. I really like adventures from our foreign friends. Their takes on fantasy, influenced by their own unique cultural experiences, can lead to a freshness that still resonates like my own Brave Little Tailor upbringing. It’s generally easy to ignore or forgive any awkwardness in the language, from translation from French, Dutch, Spanish, or Hungarian. In this case though I feel like the language barrier may have contributed to the confusion. It’s not so much awkward word choices or grammar, but rather a certain … organization? I know that organization is not necessarily unique to different languages, but it FEELS like the summaries/organization of the general information was hampered by the language barrier. There’s nothing really I can point to, it just feels that way. In any event, its the organization of the general information, and the awkwardness of it, that’s an issue.

The entire thing has a touch of the Ed Greenwood Museum tour to it as well. There’s not really enough … motivation? in it. Everyone is just a little too friendly. It’s like setting a D&D adventure in a grade school … visit the classrooms and see the differences … but what do you DO? Garden of the Hag Queen had a bit of opposition to it that this just doesn’t seem to have. Long-time readers will know that I like talking to creatures in dungeons, and I like a “neutral” dungeon environment … but there has to be SOME kind of potential energy in the dungeon to drive things, and this feels weak in that area.

It can also get abstracted. “This is the treasure room, with a big pile of treasure in the middle.” Uh … great? OSR adventures also are generally aimed at Gold=XP games, and this is light in that area.

And, one more nit. Room One says “Two homunculi (programmed to “protect goblins”) wait at the bottom of the staircase, which has been covered with lard and caltrops.” I’d turn that around. The stairs are coated with lard and caltrops and two hom are at the bottom. The first thing the party will encounter is the stairs, and that should be the first thing the DM comes across in the sentence.

This is $6 at DriveThru. The preview is four pages and doesn’t really show you much. You get to the dungeon map (star shaped, with colod coding) and the wandering table, which DOES give a decent vibe for the types of encounters in the dungeon.https://www.drivethrurpg.com/product/252506/Mims-Recreational-Garden?affiliate_id=1892600