(5e) The Curse of the Sandoval Estate 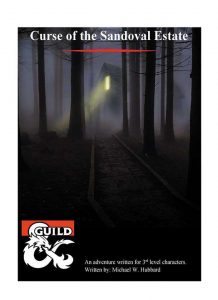 Many years ago a young man living outside of the Silverwood forest made a pact with Oberon, saving the Silverwood and it’s denizens. Given an estate and profitable business of woodworking Alexander Sandoval lived a blessed for twenty years. On the eve of his wedding Alexander slaughtered his family and the servants of the estate. That night a terrible curse has been laid upon the estate. Are you ready to unravel the mystery of the Curse of Sandoval Estate!?

This seventeen page adventure describes a 23 room manor house that is haunted by a past family massacre. It tries pretty hard, but is overly flowery/dramatic in its language and has issues with repetition. For the second time in a week, I’m wondering if there might be English As A Second Language issues … or else it needed an editor/copyeditor to clear up the writing. It’s almost unintelligible in places. And that’s coming from me!

This is the third or fourth adventure of this type I’ve reviewed. The basic formula is to take a site haunted by ghosts and have the party look around for important things that they need to put the ghosts to rest. There’s usually a ghost, the murderer, that shows up at certain places in certain times and acts out little vignettes, etc. You see the scenes, find the objects, put them where they are supposed to go, and lay the ghosts to rest. This time it’s dad killing his entire family and reenacting the evening every day for a week, once every thousand years (!). The idea is that you’ve got seven nights to learn from your mistakes, etc, in order to solve the mystery. [And, as an aside, as I’m doing this review two news stories have appeared in the last couple of days about fathers killing their families. The Affordable Care Act brought mental health service in to alignment with other health services. If you don’t want to read Camu then go make a fucking appointment. Geez, as if there’s a point to life anyway.]

It feels for all the world like the designer had a strong image in their head, or the adventure and the individual rooms. And then they went and fucked it up by not doing a second draft/edit. The text is in the same shape as one of my reviews, but, somehow, even worse. Weird comma placement, or lack thereof, clauses out of nowhere … it’s pretty hard to figure out what is going on. From the first rooms read-aloud comes: “Throughout the room, voices can be heard whispering and a sea shadowy figures float around the room.” Is that supposed to be a sea of shadowy figures? They are never mentioned again. Are they ghosts, or just shadows from the lanterns and statues? (see blow) Fuck if I know.

The front hall has some statues lit by sickly green light from bullseye lanterns in the corners. That’s not too bad. Likewise there’s a good ol hanging tree, a smokehouse, a bloody kitchen, and lots of other rooms that have a line or two of striking imagery in them. It’s not quite Inn of Lost Heroes territory, but it’s close enough to make you think of that adventure, and if that’s not a compliment I don’t know what is.

Plus its got a dying kid on a ghost unicorn that’s left a ghost trail as a hook. A pretty fucking literal Call to Adventure. 🙂

There’s no map of the grounds, in spite of that being pretty relevant and the adventure trying to be a sandboxy affair (and it is.) You need that map, the abstraction doesn’t really work. It also does things like “DC15 passive perception to notice the dead kids glove at the bottom of the lake.” I’m not cool with that sort of thing, you need to actively search for shit, not just walk it and notice it. CLues, scenes, players paying attention is what leads to search checks. Interactivity. Not just a walk by passive check. LAME.

The language can also get overly flowery at times. For every sickly green light there’s also a “Around the tree itself there is a faint pulse of life that rages against the fear and chaos that dominates the landscape.” This kind of overly dramatic shit is supposed to make you feel something. It does, but Apathy and Revulsion to the Text is not, I think, what the designer intended. I’m a fan of twisting words, using them freely to construct imagery, but falling over the line to flowery text and telling the players what they feel is a big bad No No. You need to provide imagery that make people THINK of fear & chaos, not tell them they think of fear and chaos.

The text is repetitive in place, like telling us about how a child died in the smokehouse three of so times in a couple of paragraphs. And for all of the bullet point organization of the hook information, it seems to fail at basic clarity for the endgame scenarios. You’d think that would be simple, but they seem to be out of order and almost stream of consciousness.

I don’t see an editor attached to this. If there was one the designer needs his money back. If there was not one then he needs one. I think most editors are shit, for adventures, but they would have caught some of the blatant language issues and, in my overly optimistic dream world I live in, even the organization and clarity issues. No, you don’t NEED an editor to do a good job, but you do need to put in the effort the editor would have.

This is $5 at Dmsguild. The preview is about six pages. Page three shows you hooks, and their bullet organization and that ghost unicorn I liked. Page five shows you the outside encounter areas that you have to piece together, and one of those passive DC checks in the brackish pool. The preview is a good example of the language issues, but doesn’t highlight the best of the imagery.
https://www.dmsguild.com/product/253155/Curse-of-the-Sandoval-Estate

5 Responses to (5e) The Curse of the Sandoval Estate