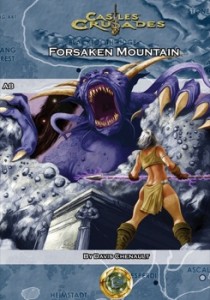 This is a Castles & Crusades adventure module, although it can easily be used with any pre-4E version of D&D.

This is a linear story-based adventure in and around the Dream Sea, an astral plane like location. The players can’t win the movie that is taking place while they are hacking four encounters.

The most beautiful woman in the world (cursed, of course) fell in love with a bad guy her curse could not impact. She was eventually carried off by an enamored good guy during the climactic final battle. The good guy died in the Dream Sea area, and now his body and the pretty girl are there. The bad guy has just found out where his girlfriend is and how to get her back. The party must stop him! Only they can’t actually do that, the module doesn’t allow that. Yes, I know, I’m the DM and I can do anything I want. It still rubs me the wrong way. The module is upfront about things. It’s purpose is to introduce the party to a future bad guy. Things have to happen a certain way.

The characters run in to a contingent of the Bad Guys troops. After killing them all they find a note describing a current rescue attempt being made to free the girlfriend. This is accompanied by a magic portal to take them to the Dream Sea (a kind of astral plane type area) and some magic items they’ll need later, like a folding boat. If they follow the well marked path (KILL ORCS. READ NOTE. LOOT MAGIC. ENTER PORTAL.) then they are at the Dream Sea. They cross it and end up on an island with a mountain and a witch.  They talk to the witch. They need to make her angry enough to attack them, so she can get killed, or be nice to her. Either will cause a path to appear to the knights tomb. Anything else leaves them here. They go up the mountain trail and get attacked by 4 sets of killer vines. In the tomb they fight the knight. Killing him lets them go to the underworld. In there they find a group of arcs and people freeing the girlfriend. As the party shows up she is freed and walks though the portal, followed by the big name NPC’s present. Meanwhile the orcs and some lesser NPCs are dying at the hands of the PC’s. The party kills the orcs and acolytes and then goes home.

Feel free to toss in ‘allegorical’ in any of the above wherever it seems to fit. There’s not much room for deviation in this adventure. It’s only purpose seems to be to introduce the bad guy and his girlfriend to the PC’s, but in name only. There are some suggestions for encounters in the Dream Sea, but they are far too Tangerine Dream for my tastes. “Make the party travel as long as you wish.” “If they seem afraid of something then introduce it” It’s too bad, the backstory of the Dream Sea, and it’s gods, is actually pretty interesting. I wish there was more to do and it was less of a railroad.