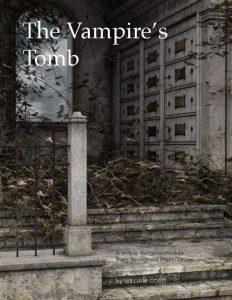 This four page adventure uses two pages to describe a seven room tomb, with the other two being title pages. Given how shitty I feel for paying $1 for it, I’m going to go in overdrive.

Room 1 starts with “”This area feels decrepit.” That, good sir, is a conclusion. The writing should not present conclusions. It should not tell the players what they are feeling, directly. The environment presented should make the DM feel like it is decrepit. Next up is “moss grows on the walls and the stonework is patchy.” That’s good, it generates that decrepit vibe were looking for. It then continues that there are emblems on the door that our players likely cannot recognize. Well, again, that’s shitty writing. Let’s just say it was the noble heraldry of House Darocar, and let the DM determine if the players recognize it. Instead of telling us that the players likely don’t recognize it, you could have described it. I don’t know, two red eyes on a black field or something with blood running from the eyes. That’s a bit foreboding. Finally, it tells us that there may be some thrall bandits in the room passing through. That’s ok. Calling them thralls is nice, it lends an air of how to roleplay them.

Room 2 tells us that its used as barracks for bandits turned thralls that the vampire is using as his personal slaves. Yes … that IS the definition of thrall when vampires are concerned. Better to use that text to tell us something else. Then it tells us that they act as guards and go on raids for victims and treasure for the Vampire. Yes, again, that is the definition of a bandit thrall. Again, stop repeating yourself. The stone wall is hard (a stone wall is made of stone usually a foot thick and about ten feet high.) It ends telling us that it has two sleeping thralls. Great. Maybe a personality, or what they know, or an tell the party? No? Right, all out of words, having used them all up telling us what a thrall is.

Room 3 has … ah fuck, I can’t do this anymore. There’s nothing to this adventure. Just lots of generic text defining what words mean. The last room has a vampire, which has no personality, stats, or anything else. I really can’t emphasize enough how hollow this is. Room 6, dining room, there is where people eat. Room 7 kitchen. This is where food is prepared. ARG!!!!!

I weep for the future. I feel like a grumpy old man, waving my fist at the sky. But, fuck, man, this is BAD.

This is Pay What You Want at DriveThru, with a current suggested price of $1. Which is too much. There’s no preview. Which is wise.https://www.drivethrurpg.com/product/251297/The-Vampires-Tomb?affiliate_id=1892600

This entry was posted in The Worst EVAR?. Bookmark the permalink.

2 Responses to The Vampire’s Tomb