(5e) Temple of the Nightbringers 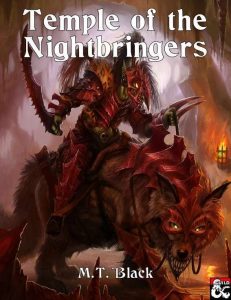 A tribe of goblins are raiding travelers on the Long Road, and our heroes decide to help. After a dangerous overland journey, they enter a mysterious abandoned temple where they encounter terrifying monsters, deadly traps, dark magic and a shocking secret. Will they survive the Temple of the Nightbringers?

This eleven page adventure feature a twelve page dungeon and is not a terrible 5e adventure. It’s not particularly good, either. Given the dreadful state of 5e adventures I think you can understand how excited I was to see this one. You should even be able to run it without having read it. I know! It’s like the designer gave a shit!

Dude gets in and get out with his DM text. The innkeeper is Seth Grimhill and he is a bit short tempered. The elven hunter happily tells the party what she knows. There’s enough NPC detail to roleplay them without us having to hear their entire life stories. Thanks. Fucking. God. Further, and get this, elf chick lives with the butchers family and won’t unlock the damn door after nightfall. One sentence. That’s all it fucking takes. One sentence. “If the adventurers try to see her that night, the butcher will tell them to come back the next day and refuse to unlock the door.” That scene builds in your head as you read it. Not a page or a column or a paragraph. A fuckton of designers could learn from this example. Sure, it could be better. The NPC’s could have two aspects, or the butcher a personality, etc, but I’d sure the fuck wish people err on this side of the terseness spectrum; at least it’s still usable as an adventure when they do.

The dungeon shows some similar thought. There’s a bit of read-aloud (more on that later) and then a small DM notes section. If there’s something important then it appears BEFORE The read-aloud. Room noisy? Door spiked shut? That’s the sort of shit you need to know before you get to the read-aloud and it’s actually placed before the read-aloud. It’s as if someone thought “what information will a DM generally need first?” and then they went ahead and put that information first. I know it sounds obvious, but the vast majority of writers don’t do that. The DM text tends to be short as well, just a couple of sentences. PERFECT! Give me the TOOLS to run the room rather than obfuscating the room by hand holding.

As far as the content, proper, it’s trying pretty hard and DOES use several aspects of good encounter design. First, you can talk to a few things. That adds IMMENSELY to adventures. After all, it’s a roleplaying game, and that doesn’t mean we take turns hamming it up. You can always stab something, talk to it first, have some fun. Throw those worgs some wagyu and bribe that bugbear.

There’s also this thing in better dungeons where you can fuck with things. Glowing pool of water … wanna fuck with it? That risk-taking OUTSIDE of combat is one of the hallmarks of good D&D. Yeah, yeah, the dungeons dangerous and bad DM’s put in pit traps, but FUCKINGwith something. That’s tension baby. The players debate. They conspire. They come up with stupid plans. That’s D&D.

There’s also a nice magic item, a mask. Wearing it gives you a +1 bonus to a few things and lets you take a short rest immediately. And the effects last an hour … minus one minute for each time you use it. And it slowly shifts your alignment. That’s a decent magic item. Maybe a little too mechanical, but it is still 5e after all. It’s not just a +1 sword

The read-aloud is also too long. Three sentences, that’s all you get. And putting in the room dimensions and where the doors are is lame. Let the players ask. Remember, that WOTC study showed that no one pays attention after 2-3 sentences.

I also noted that I have a REAL problem with “storyteller” style text. “You know the mud from your boots as your cross the threshold” makes me want to retch in my mouth. The story belongs to the players, just be a neutral judge.

There’s also a level of abstraction I’m uncomfortable with. We’re told that this is a particularly savage goblin tribe. B O R I N G. Details. Heads on pikes and blood angels made of entrails. That’s still short and NOT abstract. Likewise the rumor data is abstracted. The key is to make it flavorful while still being terse. That’s powerful writing. That’s what we should be paying for.

I can quibble with a few more things. ‘How many goblins are there’ is a natural question for the players to ask while investigating, but there’s none of that information provided anywhere by the NPC’s, or easily by the adventure, for the Dm to look up. The ELven Hunters information would be better in bullet form, as the rumor table is. It makes it far easier to find information.

There’s some bullshit skill checks also. DC10 to be let in to town. Some Religion roll to know something is related to some god. Neither of them actually have an impact. The Religion stuff is trivia (and besides, I think the party is told the goddess straight off? Weird that a statue to Shar in the temple of Shar, right?) Who did that/those article on good vs bad skill rolls? Hack n Slash or Finch maybe? It should be required reading for designers AND editors.

Finally, it engages in history in a few places, why zombies are in a room or the EHP backstory. Stick it in an appendix if you must, but keep the damn shit out of the main text where it clogs up running the adventure.

I’d say this one is on the low end of what I might find tolerable. It’s got nothing much special going for it, content wise. It IS one of the few traditionally formatted adventures that you could run 5 minutes after buying. That’s not a trivial accomplishment. Compared to most 5e adventures this thing kicks ass.

This is $2 at DriveThru. Ye Ole Previewe doesn’t seem to work?https://www.drivethrurpg.com/product/171272/Temple-of-the-Nightbringers–Adventure?affiliate_id=1892600

12 Responses to (5e) Temple of the Nightbringers