The Cult of the Green orb 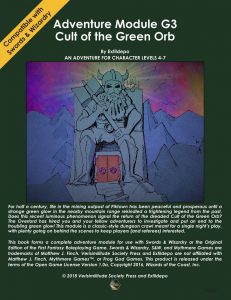 For half a century, life in the mining outpost of Piktown has been peaceful and prosperous until a strange green glow in the nearby mountain range rekindled a frightening legend from the past. Does this recent luminous phenomenon signal the return of the dreaded Cult of the Green Orb? The Overlord has hired you and your fellow adventurers to stop the troubling green glow!

This twenty page adventure describes a thirty room dungeon. Undead, spellcasters, demons, and even a dragon in what one could call a classic mixed dungeon-crawl. A verbose writing style mixes with classic fantasy elements to provide a nostalgic dungeon experience.

Classic experience indeed. The front doors feature a great statue of a dwarf, carved in to the mountain, backlit with green light. They close behind you when you hit a pressure plate. There’s a dragon literally slumbering in the throne room atop a pile of loot. There’s a demon trapped in a summoning circle. These classic elements are combined with popular fiction elements. There’s a troll head that could be out of The Thing, a gollum-like NPC … friendly until he gets his sanity back, and the Locknaar of Heavy Metal fame. And those were just the most obvious. This all combines to create a charming nostalgic feel to the adventure. No gimps or gimmicks, just fuking with demons and dragons, weird green glows, and the like. The map is decent enough to support an exploratory type play.

Alas the writing and formatting is terrible. Paragraphs do a great Wall of Text imitation, making it hard to wade through them. It’s combined with the usual unfocused verbosity. Room 24 is an Apprentices Lab, or so says the room title. Also, the first sentence of the description is “Here is the typical apprentice’s lab.” Okkkk… I think you just said that? Also, then there’s a description that follows that tells us what a typical apprentice lab looks like. Seventy wasted words, followed by a purple velvet bag hidden in a corroded brazier … maybe fifteen useful words. This is the agony of my existence. The NPC’s back in town are another good example. Trading Post dude is boisterous and barrel-chested with a strong black beard. Good imagery, all self-contained in one sentence. And then we learn he’s in his 30’s, young for his job, and took over from his father, Frank, who was killed by a green dragon named Cylith when the NPC was ten. THEN follows a bunch of read-aloud that contains what he knows about the shit in the area/dungeon. This nonsense goes on for two pages. Name, personality feature sentence, a few in-voice bullet points. That’s all you need. The rest of this garbage text is useless and gets in the fucking way of running the adventure and I HATE it when that happens.

This is one of my favorite room descriptions. Not as good as that Dungeon Magazine empty room thing, that’s still the all time best by far, but this one is good also:

“4. Empty Cells: This is where the prisoners of Azul Rik awaited trial. They are all empty and each cell door looks as though it has been forced open. Some shackles are missing or broken off at the chain. A few bones (some goblinoid) litter the cells. This place was once full of long­dead prisoners of the Iron King, but they were raised long ago by the Loknaar for Zed’s army.”

Nothing. Just nothing. There’s always some fuckwit that needs to disagree, so, please, go ahead, tell me why this is a good description. Empty Cells, forced open, broken shackles, indeterminable humanoid bones. And I’m a shitty shitty writer.

7 Responses to The Cult of the Green orb