AA#40: The Horror of Merehurst 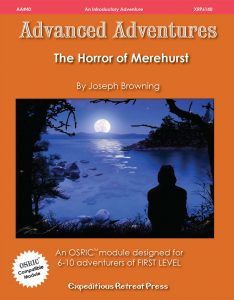 The island of Merehurst was once a bustling center for trade. But this was not to last, for in one single deadly night sixty years ago all the people and the animals of the town died – collapsing where they stood. The neighboring villagers of Coombe claimed that the miners dug too deeply into Ynyswel and the spirit of the isle was offended. The island gained a fearsome reputation and only the bravest would dare set foot upon its forested grounds. Yesterday strange lights were seen in the sky over the island and Ynyswel started smoking. The villagers can wait no longer. Brave adventurers must be found who are willing to investigate the Isle of Merehurst to either appease or oppose what lies behind the latest mysterious activities.

This seventeen page adventure describe about 45 locations on a small island: an abandoned village, farmstead, and mine. It’s got a creepy ass vibe and does a great job creating an exploratory environment. If his editor had cut half the words instead of over-explaining it would be a great, solid first level adventure. Oh, wait, it looks like he wrote it AND edited it …

THis thing sets itself up as creepy as fuck. The background information is all mysterious. An entire village dying overnight on the island. Strange lights on the island that can be seen from the shore. No word from the loner family living on the island … it’s a nice erie set up. It’s strengthened by a wandering table that has a fair amount of creepy and weird happenings on it to help with the mood. Crawling hands, dripping blood, a flopping fish far from the water. With a decent DM the party will be shitting itself in no time. In this respect the tension built is kind of wasted on the “normal” wanderers, especially the undead. It feels like that would break tension. But that’s an actual play thing ands easily adjusted in play … more of an academic point of debate I guess I’m asserting? Anyway, it’s got a great creepy vibe n the environment and nice encounters to support it like undead children and the like. I seldom mention art, but in this case the undead kids, creeping eyeballs, and “map art” is all top notch and does a wonderful job contributing the overall vibe of the adventure. That’s exactly what art SHOULD do in a product, and does not in most cases.

The encounters are a great mix of the mundane and the dead. There’s a substantial set of ruins in the village and plenty of room for that giant tick in the overgrown collapsed building, as well as the half-dead. There’s even some room to talk to a few things. It’s not packed to the gills with combat with, again, reinforces that creepiness.

The writing is, again, the downside. It’s not overly evocative, for all of the attempts at creepiness. Dripping blood is not quite as good as oozing blood, which is an issue here; it is solidly in the “workmanlike” category of descriptions. A little more time spent agonizing over word choice would have gone a long way here.

As would, as I said earlier, an editor to challenge on the writing. That assumes an editor would, and I don’t think they do much anymore. Copyediting and other simple suggestions? Writers need challenged. Every sentence, if not word, should contribute, and that doesn’t happen here. A storage room description tells us “As the mine expanded more storage was needed and this part of the new stone building was set aside for that purpose.” It is almost NEVER The case that explaining WHY is useful, and that drops even more when you talk about usage and history and “used to be.” That sentence doesn’t help. It doesn’t help me run the room. In fact, it detracts from it. As I look at the entry while running the adventure I have to wade through it before I get to the actual room description that I need to run the room. This adventure does that over and over again. Stirges are nocturnal hunters who travel in to the northeast when the sun descends — —they’ve learned to avoid the ruins of the city as several of them have recently been killed by the various predators within. What’s the point of that? It has no bearing on the room. If the party is here at sunset do you think I’m going to suddenly remember this detail and make the stirge fly out? If you WANT me to do that then you need a section in the front on day/night changes that will prompt me. No, this is more explaining. It’s fleshing out a world in a kind of computer RPG manner. Richly describing things that will almost certainly never happen. If I was playing Fallout and say some batlike oobs fly out of some ruined building at sunset it would get my attention … but, again, that’s not what is happening here.

Treasure does “spill from pouches” at times, but it’s mostly the usual assortment of +1 swords. Again, workmanlike.

This is $14 at DriveThru. The preview doesn’t seem to work?https://www.drivethrurpg.com/product/234226/Advanced-Adventures-40-The-Horror-of-Merehurst?affiliate_id=1892600

8 Responses to AA#40: The Horror of Merehurst