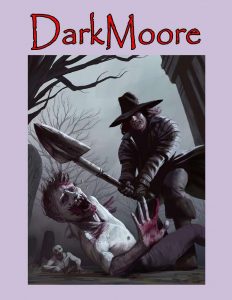 The infamous DarkMoore Inn is closed! It appears the entire staff has been kidnapped, with nothing more than a ransom note demanding gold as the only clue. Despite these dire circumstances King Alangar never goes down without a fight and has placed his trust in his newly appointed Captain of the Guard Thaddeus Ugelcort. Thadeus has set up shop around a corner table at the Iron Dragon Inn where he coordinates the business of the day in the King’s absence. Thaddeus believes the hostages will be found by following up on every rumor, examining every rat-hole, and scavenging the entire countryside. The word is out, all you do is show up and talk to Thaddeus and get paid when you complete each task….what are you waiting for?

This 59 page adventure contains 10 “errands” for the party to undertake, all tied around the plot of the missing employees of an inn. The charm of pre-standardized D&D is impacted greatly by the linear nature.

You go to an inn. Captain of the Guard recites a monologue, assigning you a mission/task. You go do it, earning story XP. Repeat. Single column layout. Paragraphs of read-aloud. The village has a giant castle, two inns and one general store … that sells magic items. The king lives in the castle, in the village with one shop, and is trying to raise the ransom for the innkeeper. It all makes absolutely no sense … unless you imagine it was written by someone in jr high who started playing D&D two weeks ago. THEN it makes perfect sense …

Frogmen attack in the swamp. A weird obelisk raises the dead. A demon on chicken legs appears. An idol summons rattlesnakes to attack. I am FASCINATED by non-standard D&D. Those Unbalanced Dice adventures. OD&D stuff. Even the Fight On! #2/Upper Caves things I love … all have a certain non-de-rigueur element to them that emphasizes imagination over book learning. And I fucking love it.

But man … forced combats. One fight involves a lot of backstabs for your level one characters. Story awards instead of gold/monster XP. Instructions to make everyone level two if they are not .. or bump them from level three to four is they are close. The single column and … stream of consciousness? Event-based? Linear time based? “And then happens and then this happens and then this happens” based writing style is hard as hell to follow as the adventure wears on.

This is PWYW on DriveThru, with a suggested price of $7.https://www.drivethrurpg.com/product/248658/DarkMoore-Adventure-Modules?affiliate_id=1892600