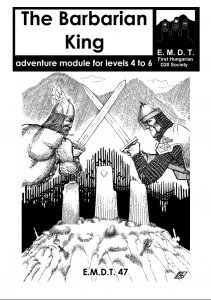 The Barbarian King pits the company against the ruined empire of the mountain barbarians… and the evil that still slumbers therein! This gloomy wilderness and dungeon scenario features deals with malevolent and ultra-powerful spirits, the burial places of a now defeated people, shadowy hosts and deadly traps.

This 24 page adventure details a small valley and the tomb of a … barbarian king. 🙂 It’s got a GREAT vibe going on, and Gabor takes things just a little bit further than usual for an adventure, thinking about things just enough more to make things make sense. It’s a good adventure.

It FEELS like some bronze-age shits got their asses kicked. I just saved an article about battlefields from (Encounter magazine?) so this stuff is on my mind lately, The valley where this adventure takes place was where the barbarians were wiped out. As such it’s got a good “old battlefield” vibe going on, with old fortifications, monuments, and the like scattered throughout. All shows the impact of time, with signs of damage and looting. You get a good vibe off of the descriptions and there’s a sort of abandoned melancholy feeling that hangs over things. That’s quite an accomplishment and gets to the sort of writing I’m looking for .. .writing that conjures something inside of the DM that they can then leverage to expand upon the encounters.

Statues of the victors god, now run down, available with boons if the party restore them. That should be a go to every time you see a shrine … the same way there should be a cave behind every waterfall. I’m fond of the way the mechanics are handled, with subtle healing, protection from evil spirits roaming the valley, and even a raise dead once the valley is cleansed. It makes sense. These are the gods of the people who cleansed the valley in the first place. Of course they have an interest in things. IMO, there’s not enough of this in modern D&D. Cast a bless, clean up a temple, or defile an evil one and get some pseudo-mechanical benefits … even if its just a vision or clue.

There’s a village of passive-aggressive shits in the valley. Former slaves, in denial that the barbarians were wiped out. It’s handled VERY well and you get an immediate sense of who they are and how they react to the party. Hate & fear, for illogical reasons. IE: they are humans not exactly acting rationally. Again, it makes sense. Gabor has put just an iota more throught in to the place than is usual for an adventure and because of that it is so much richer a play environment. It’s what you WANT from a village instead of the generic fantasy crap you always get in adventures.

Steep canyon walls, rushing river, broken down bridges and fords, mists hanging around at all hours, only burning off for a few hours in the early afternoon … Im in luv with this place.

I frequently harp on short & terse, well-organized descriptions. I think that advice works best for most people. But there are other ways. The sticky description, and so on. Melan does a good job building up a vibe, sentence after sentence, and providing descriptions that FEEL right. His use of paragraph breaks and bolding complete an eneoucnter style that’s easy to follow.

The single column gets old after awhile, I think it makes my eyes tired following it. The text can get long in places but its organized quite well, with bolding and bullet points and the paragraphs arranged in a way that puts immediate information up front and detail information in paragraphs following. IE: the right way. Or, maybe, “one of the right ways.”

The tomb, proper, is stuffed full of undead. FULL OF UNDEAD. Treasure seems quite light (unless I missed something?) for an adventure of this level.

I like the appeal to one-shot mechanics. Menhirs with runes on them can give you a temporary one-time spell boost. The temple restoration thing. It’s not all book mechanics and from that standpoint the adventure feels more … natural?

Oh, great, and now I discover I’ve already reviewed this, in another form, when was it appeared in Fight On! This must be the third or fourth time I’ve double bought something by accident. Ug. Also, I now call Gabor Lux “The Gabor Lux” because I think it’s fun. Idk, go figure.

This is $4 at DriveThru. The preview is ok. The last page gives you a good example of the writing style. It shows a flavorful and evocative style without resorting to the brutally terse style hat I usually expose.
https://www.drivethrurpg.com/product/247440/The-Barbarian-King?affiliate_id=1892600

8 Responses to The Barbarian King