The Dark of Hot Springs Island 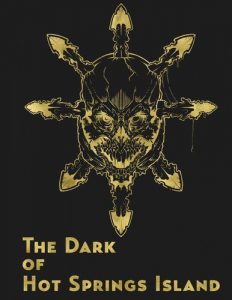 This 200 page adventure is a jam-packed hex crawl on an island full of factions and weirdness. Close attention to both usability and imagination have resulted in a must-have product. Magnificent. And it would have been even more magnificent if they had put in fewer words justifying the lack of monster stats and had put in monster stats.

Sometimes products come along that are clearly exceptional. A strong creator vision combined with something new. On the Adventure side of thing, Wilderlands was an early example. We might also list Stonehell, Rappan Athuk, Maze of the Blue Medusa. Something new, leveraged to see a vision implemented. This is one of those.

There’s an island, with sixteen hexes making it up. Each hex has three encounters in it. Some of those are minor and some of those are multi-room dungeons. The first one hundred pages of the booklet deals with that. Two pages summarize each hex and encounter. Then each hex gets a more in-depth description, with all of the detail of each hex fitting on a single page. Then there’s an expanded section for each major encounter that describes each one in more detail, generally a page or two. Think of it as providing the map and encounter key for those little dungeons on the isle. This section is cross-referenced to all hell and back. Factions, NPC’s, other hexs … if something is referenced a page number is given.

There are great summaries of the island, the hexes, the factions. Wonderful examples of how to actually USE the book, and tables to help generate rando things, like names for NPC creatures. The travel system outlined is simple and easy to use. The maps are clear and easy to read. I am a hard art critic, not liking much, but I must say the two-page spread of “Hot SPrings City” is something I would have framed it it were larger. (Joining the cutaway of the Starship Warden that hangs in my living room. I note that they are both very busy pieces.)

The second half of the book describes the factions and the major players, as well as monsters and magic items and tables, the usual appendix stuff. But … the factions. Man. This fucking shit is deep. There’s a group of ogres on the island, fighting a rebellion. The ogres get a one page write up. Then one more about the high priests influence, whats going on right now, and a major subplot. Then there are eight different major NPC”s presented, each with a little history/write and bullet point list of what they want and what they don’t want, followed up a few subplo/traits. And they are not just things to hack! And that’s just for ONE of the six major factions. It’s nucking futz!

Th creativity is off the charts. Not exactly gonzo … more Isle of Dread with a bit more “ancient elven magic” mixed in. More Dread than Dread, I think also. The environment for creative play is there, and then …

AReas are lightly keyed. Generally this means a map, some brief descriptions of the map, a table to determine what the general 411 of the map is, and then en encounter chart with they are doing. The ide being you have a place (the map and keys) and then roll to see what’s going on. Simplified, let’s say “turf war!” And then you roll for each room to populate the room and what activity they are engaged in. And your mind naturally related everything to “Turf War.” The system works very well. If you are in to building it on the fly. I’m not sure I am.

Oh, and there’s no monster stats, which is why there is no level rating. And there are seriously enough NPC’s to choke a horse.

I am a jerk-faced jerk. I insist on usability at the table. That’s my definition of “adventure”, which is what I review. I don’t want to prep an adventure. If I have to prep its a toolkit and, while I might be fine with a toolkit, I want to make sure I understand that’s what I’m buying.

Didn’t someone redo the maps in DCO? This thing needs someone to stat the damn thing. And make a one-page/one-sheet NPC summary list. (Ahum, with page number cross-references.) And maybe a rando generator for the rando stuff. (Although, I could probably do that in about 30 minutes, by hand, for the whole book, which doesn’t seem unreasonable to me. Remember, I’m also a hypocrite.) Didn’t I rip Gardens of Ynn for the same thing? It IS pretty easy in Hot Springs to do that, easier than I recall Ynn being. This is almost certainly a case of me being unreasonable and citing something for the sake of citing it. The generation takes about a minute per “major area”, which seems fine to me. I also kind of wish that the travel rules were condensed and on the map. That would be a great final nod to usability.

The intro nodes that the island is a powderkeg and the party is the spark. I like that analogy for a good adventure. If you’ve got a lot going on then you can dump in the party and watch the place explode. Lots going on, and lots of threads to follow and exploit. That’s D&D.

If you’re still on the fence then you might also red my review of the Lapis Observatory. It is ONE of the locations on Hot Springs Island.

Yeah, the physical thing is pricy. But … really? For the amount of play you’re going to get out of this the price is trivial. Most price pressure, I think, revolves around the fear of getting ripped off. I don’t have a problem paying if I know it’s good … and this is one of those stake-in-the-ground products. You’re a fool for not having this.

This is $20 at DriveThru. There’s a 20-page sample available at the publishers site. It goes through how to use the book, and then page nine shows you main hex summary descriptions, with a few samples of the locations to be populated and the NPC faction data. It’s a great preview of the writing.

17 Responses to The Dark of Hot Springs Island