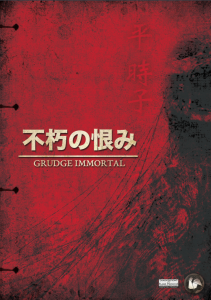 The Year is 1564. A group of Western explorers reach Japan on board Portuguese vessels, lured by the promise of adventure, fame, and riches. What awaits them on the ghastly island of Takashima, however, is a much darker tale…

This 40 page adventure details a small Japanese island with a very bad spirit on it. Good theming can’t disguise the verbosity and formatting issues though. This could easily be half as long, if not less, and be much better for it. It’s a good horror adventure, and those are few and far between. But man, it’s a textbook example of an adventure making sense to the author, but needing the hand of a good editor to cut Cut CUT.

While in a small Japanese village the players hear some rumors. Some primitive villagers on a nearby island have silver with weird runes on them, there are pirates on the island, the island is a Heavenly Ark, left behind during the Age of Gods, and/or there’s a legendary sword on the island. This brings the party to the island. The first eight pages are full of background, historical and fictional, which condenses down to “you’re in a village and hear some rumors”, with it assumed the party follows up on. The actual content in this section is pretty weak, consisting mostly of just the half-column of rumors. Everything else should have been stuck in an appendix to safely ignore.

Achieving the island, it’s full of massacre site after massacre site with great horror imagery. A ruined fishing village full of the bodies of women and children cut down. The elders hut on a hill has some bodies torn apart, impaled, in a wholly different way than the rest of the village, and the headman is at the bottom of a ladder, his neck broken from a fall. Elsewhere on the island there a woman’s body stuffed in to a sacred well. In the ark proper there are the bodies of children in various states of decay mired in muck in a small dungeon room. It’s creepy as fuck, and a slow burn until it explodes in action. It’s got some great imagery, the dungeon proper has a lot for the players to interact with and get in to trouble with, and feels for all the world like both Japanese horror AND a deadly LotFP adventure. That kind of “the only winning is not playing” high character stakes shit that Raggi adventure have had. Good horror, the slow build with creepy as fuck shit, is hard to find in adventures. This is good horror.

The adventure is also a total pain in the ass. It engages in LENGTHY descriptions of things with seemingly on the very basics effort made to organize itself. So while you get major section headings like “Village” or “Pirate Base” you also get facts mixed in to the text, all stream of consciousness style. Mixed in to the pirate base description it tells us that at night you can hear gunshots from the base all over the island. Well, fuck man. That’s important. That’s not something that you bury in the text of one location. “Wilderness encounter 45 of 134: A great visage of God hangs over this site and can be seen everywhere, pointing a big red arrow downward.” The gunshots are perhaps the most glaring example of this lack of thought, but it shows up everywhere in the adventure. The formatting of large chunks of text is just plain WRONG. Important things are mixed up in the text of trivia. You have to read a full column or more to get a grip on whats going on in a location. General descriptions should be up front, with the most obvious things, with follow up text explaining more. Summaries, indents, bullets, bolding … use the full power of word processor and layout to bring clarity to the adventure text. This is just verbose stream of consciousness writing. Sure, the layout is nice, but who cares if its a pain to run?

Here’s the description of one of the rooms in the dungeon/Ark:
“Partially submerged within the sludge on the floor are the rotten corpses of eighteen male children, each in a different state of decay and swarming with arhropods. The most recent has probably been dead for less than three weeks, and the oldest is little more than a skeleton. All of them had their neck broken; a careful examination of the more intact corps- es reveals they were tied or restrained.

These are Tokiko’s failed experiments, the children kidnapped by the villagers and killed for Antoku’s soul to possess them. This process has never been successful: the young child-emperor has retained some of his sanity and purposefully resists the process. Tokiko doesn’t know this, or perhaps she refuses to acknowledge it.”

Note that the second paragraph is all fluff/history. Irrelevant. We’re actually told this information three other places in the adventure, iirc. The first paragraph is good, but, perhaps, formatted sloppily. The last sentence, maybe the last two, could be broken out in to another paragraph or via bullets or something. It’s not such a big deal in this room description, but as the descriptions get longer and the DM text does also, it becomes critically important to make the data easily transferred to the DM during a quick text scan/read at the table. It does this over and over again. You’re not writing fluff. You’re writing a tool to be used at the table. It CONTAINS fluff, those evocative descriptions and so on, but its primary orientation must be use at the table.

I like the adventure. Nice slow burn horror with dire consequences. That’s rare enough. But man, I can’t stand the format. This morning, it’s not worth it to me to go all highlighter on it. Let’s all remember though that I have very high standards; this thing is certainly interesting and its cons may be more manageable/acceptable to a wide range of folks.

This is $7 at DriveThru. The preview is six pages. It shows you all of that background data on Japan, historical and fictional, and the small section on the second-to-last-page that has the rumors/hooks. https://www.drivethrurpg.com/product/230052/Grudge-Immortal?affiliate_id=1892600