To Bring Down the Sky 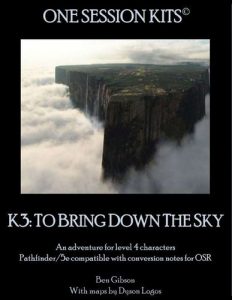 The overcast sky and dusty road are working in concert to make for a truly dismal day. It’s almost a relief to hear something out of the ordinary, like a wailing cry of panic and a harsh, coughing roar. Looking up to the clouds, a thin human figure hurtles down, chased by a savage beast with reptilian wings. But looking up past the two is an even stranger sight…three mighty isles loom out of clouds, impossible and yet somehow real.

This 49 page adventure, with about four actual adventure pages, takes place on three islands floating in the sky. The party travels there to recharge a feather of mass fly, and ends with fighting an quantum ogre. It’s terse, got good encounters, has a couple of interesting product concepts, and delivers on the “everything you need for one night” promise that so many other products fail at.

Normally, a 49 page adventure with four pages of content would arise my ire. This is PWYW, with a price of $1. I can pay a $1 for four pages. But wait, there’s more! This promises everything I need for a one shot/one night of adventuring. So many products do that. I’m pretty sure I’ve yet to see one deliver. Except this one. All of those other pages are support material. Blank character sheets. Party handouts. Pre-gens. Gear lists. A one page primer on how to play. 25 pages of battle maps. Some printable mini’s. I’d have a hard time imaging how someone could do better than this.

Then the adventure does something else interesting. There’s a DCC adventure that you can use when someone dies. You go off to the underworld to save their soul, if I recall. Blades Against Death. You pull out the adventure when someone dies. At that time I called it a whole new genre, the SItuational Adventure. You pull it out when a certain situation arises. I’m not sure I’ve seen another one in that genre since I reviewed Blades in 2013. Until now. This adventure gives you a magic feather that has, essentially, a mass fly spell. If your party needs to get a long distance, fast, then you can whip this one out. At the end they will have an item that can take them a long distance quickly.

Of the four pages of actual adventure you might consider two of them background. You read those ahead of time, once. They provide some background, a general overview, some clarification of wider goals, the preamble, hook of the adventure, and so on. Then there are two pages that are used during play, one a map and one a key. The map, isometric (I love isometrics for larger/complex places! DL1 to the rescue!) contains a few other pieces of information as well; some personality overviews and some stats.

Those personalities overviews are something Ben has done before/frequently, and I love them. He gives an NPC a three word description. The apprentice wizard on the isle is helpful, curios, and panicky. The old caretaker couple is dour, scared, and nostalgic. These perfectly communicate what you need to know to run the NPC and integrate them in to the adventure in a fun way. Panicky and curios gives you ideas. Nostalgic and scared gives you ideas.

The adventure uses a lot of techniques that I’m willing to call The Ben Style. Centered around a one or two pager, or a series of them, these short NPC descriptions, terse stat blocks and key descriptions, and some background information that is generally read-once orientation. It’s a great format. He also does things like give adventure follow-on suggestions, social mind maps for NPC interactions(Yeah!), and gives location reference in the text descriptions so you know what/where to look for things.

The encounters, proper, are interesting as well. The halfing couple are trapped in their house, with wyverns in the barn … along with the calf they don’t want to leave behind. A bridge pulls away from the main island. Wyverns lie sleeping, gorged. Bathing an artifact in the quantum ogres blood recharges it. They are interesting and make sense.

There ARE a few things that annoy me. The bridge that pulls away, it does that 30 minutes after the players arrive. That could have used some bolding or otherwise some sort of standout text instead of it being in the key description. Likewise, the monster descriptions are a little light. There’s at least one sentence/thing I don’t understand at all: “Pass to second isle exit is behind secret door.” Huh? The isle is connected to the main one by ropes … how can there be a second exit?

Is this one of the Best? I would say it has done as much as you can with with the format of the one/two pager. A little light on monsters descriptions, or evocative text. But … it’s a one pager. There’s a limit, I think, to the amount that can be accomplished with this format, and I think Ben has pretty much reached it. This is, absolutely, an acceptable level of adventure writing. If you were looking for an adventure and picked this up you would be satisfied, both with the adventure and with the claims it makes. It’s a good, solid performer. This goes against my absurd desire for every adventure to be an evocative tour-de-force, which is stupid. This is a good adventure. Ben would be my go to for 5e/Pathfinder content, at this point.

This is Pay What You Want at DriveThru, with a current suggested price of $1. The preview shows you the main four pages of the adventure, all of the actual content. How can you ask for more than that?
https://www.drivethrurpg.com/product/244681/One-Session-Kit-K3-To-Bring-Down-the-Sky?affiliate_id=1892600

4 Responses to To Bring Down the Sky