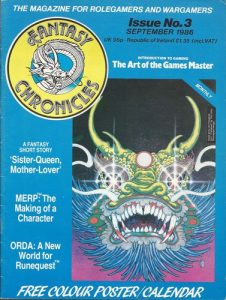 Eight pages of four column tiny font from an obscure Irish(!) rpg magazine from the 80’s that is ALSO a favorite of Kent? Sign me up! I finally tracked down a print copy of the magazine … well, two. The first was lost in the mail and the second came in from Uganda. I know. The things I do for love. We’ll pass on the usual wall of text and usability criteria for this one and just accept the limitations of four column tiny font in a magazine. That part blows.

I often talk about digging through boxes of junk adventures at cons and stumbling across a masterpiece. A hidden gem. That’s what this is.

This is a good adventure. Adventure outline? Something like that. Imagine something like B2. We’ll call that a normal and/or standard adventure. Location, keys, etc. Then there’s those BS plot adventures. Lengthy, scenes, a series of locations, etc. Something like Stonehell, or other one-pagers, might be seen as an outline of the standard B2 type adventure. It tries to keep flavor and what’s important while minimizing the rest, all in an abbreviated page count. (I’m straining the example a bit, B2 is pretty abbreviated already.) Beholder Contracts might be seen as an abbreviated version of the plot adventure. It provides a general outline, specifics to add color, and lets you, the DM fill in the rest. You get more than the usual plot adventure because it leaves things out. By providing an outline it allows for more room to color outside the lines, avoiding the typical railroad elements. We might think of it as a small number of places for the players to visit all connected by some threads.

While healing, the party is approached by a henchman of wizard 1. He wants the party to go recover a lute stolen by a musician who was then captured by wizard 2. Wizard 2 knows nothing, but finds a reference to the lute pointing to some barrows. Visiting the barrows turns up a ghost of the musician. Seems wizard 1 steals peoples eyes … and wants to steal the parties eyes for what they saw in Wizard 2’s home. A visit to wizard 1 is in order …

And absolutely every little bit of that outline I just provided is WONDERFUL. You’re resting in a little monk grotto/gardens. The flavor is well communicated in the text. Wizard 2’s abode is great … high on top of a mountain … with a great view. Not a meany, just a wizard. The ghost? Not actually. Half alive and half dead, he plays on the lute to partially revive his corpse each day … before the effect begins to wear off. The wizards? Flavorful as FUCK. Bob the all-seeing collects eyes. Wizard 2 is a lightning. Their stats break ALL the rules. Treat as level 6, but only with access to level 1 spells. Except for lightning at level 12. They FEEL like idiosyncratic wizards … which is exactly how the fuck NPC wizards SHOULD feel. The PHB is for the players, dummy!

The supporting material is good. General maps, showing just enough detail to ground the DM. Stat blocks and magic items are easy to find. There’s an abstracted overland travel map that concentrates on JUST what the DM needs to run it. It’s 120 miles from a to b, add 20 if you are taking roads. Roll on the hills wandering chart in the DMG once a day. As Shao Kahn would say … Excellent!

The writing style is quite evocative. It’s sticky. It’s all free-form paragraph descriptions, not typical room/key. For most people writing I would suggest room/key and the one or two sentence evocative description. But that is not the only way, and I would never suggest it is. It’s just the easiest way for most people, especially amateurs. But you can do anything you want as long as its effective. I’m fond of quoting the description for Old Bay, the retired hill giant who LOVES giant crab legs. Once read you will never forget him. The descriptions here are more akin to that. Sticky. Plus, the amount of detail to be kept in the head is relatively short for the DM. At just four double-sided pages, the DM need only read a column or so of text to keep in their head, and they can run the nights game of just that. There’s probably enough content for, I don’t know … three or four sessions? Thus you read tonights section, it gets cemented, and you run it. It’s all general descriptions, the vibe and feel of a place, with the rest left up to the DM. It’s a perfect amount, and type, of content.

The NPC”s and places are all memorable. The magic items are great and unique. There’s a natural progression to the adventure that doesn’t really railroad players but still has a kind of plot going on.

Having said all of that … this will require a highlighter. Some bits are more important than others and they are all mixed in. Plus, you’re not gonna find this for sale. Haha suckers! I got it and you don’t! (Which is why I tend to not review older things and I’m shoving this in to a weekend “free for all” slot.) Some kind person should get the authors permission to rewrite it, keeping the spirit and flavor while ditching the limitations of four-column tiny-font magazine layout limitations. Whitespace, bolding, boxes and indents … Some layout would be most of what it takes to turn this thing in to a 9 or 10.

Bah! My google art foo fails me! There’s an illustration of a water nymph standing in a pool of water, clutching a garment to her, with adventurers next to her with a spear, I think. Classic D&D art, maybe in the style of those old turn of the century styles that everyone grabs for free for their OSR stuff. This reminds me of that. The feel. The richness of it. I’ve seen 2e is be good ONCE. When it is it feels like classic free-form OD&D. Rich beyond belief. That’s what this adventure is, rich beyond words.

I feel like someone I know has reformatted other older adventures that were kind of a mess. Maybe they would like to get the authors permission and bring this one in a more usable form also, so the world can enjoy it?

20 Responses to The Beholder Contracts