The Palace of the King Under the Water 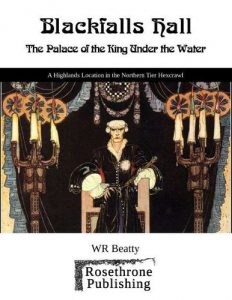 This 59 page adventures describes a multi-level complex of humanoids dominated by an evil king. With about 120 rooms, it is the real deal when it comes to multi-level dungeons. Fleshed out and fully realized, it has great variety and a … continuity? to it. Also, the editor was on LSD. I want to say something like “this is a nightmare of epic proportions” but that would be a great exaggeration. It’s disorganized with the DM text being all over the place, making it hard to parse at the table. For some reason I’m reminded of Dark Tower … great, but not simple to use. Or maybe Yrchyn the Tyrant from Usherwood … fully realized.

This thing don’t fuck around. It has a short background on page four and starts the keys on page five. Page 45 ends the keys and starts with the maps, monsters, magic items, AND A MONSTER SUMMARY SHEET!!!! The entire thing might have two pages of background info; that half page at the beginning and one page at the end describing rumors, hooks, and factions. The font is small and the information DENSE. It’s been a long long time since something like this popped by.

By my count there are seven levels, with varied map styles. Dungeons, grottos, outdoor cliff dwellings with an isometric view to help you understand it … perfect. The maps are Dyson. I know a lot of people love Dyson maps but I’m cooler on them. The ones I’ve seen generally tend to be small, almost like lair maps, with varying degrees of interesting features. Some of these are larger, to the point of being full on exploratory maps with many loops. Magic items contain a decent amount of uniques, especially with swords. For example, Bitter Root, the longsword, +2 can only penetrate magical armor, useless against non-magical armor though still cuts flesh.

Multiple prisoners to rescue, factions and machinations, up to and including the False King and the True King of the halls. Garran Ocar, High Priest of the Flood makes an appearance. Who the fuck is he? Hell if I know, but that name, oh man! Well, yes, I do know, he was drowned and raised by the true king. That’s the sort of detail that just oozes flavor. An old bitter ghost has cursed the place and now long-time residents are obsessed with birds (a part of it used to be a temple to a bird god.) This opens up some bird theming for the goblins, including riding giant vultures in places … like a cave mouth overlooking a high cliff, and a shamen that may jump out of window to be at one with the bird gods. There’s a kind of interconnectedness that runs throughout the place, with multiple themes. PERFECT for D&D exploration! Players love that kind of shit, and so do I as a DM.
Now, let’s talk about why this wonderful piece of work would be a nightmare to run. Room 1:

“The path up the cliff side is winding and treacherous, following a series of switchbacks, ending at the bottom of a series of buildings clinging to the cliffs on the western side of the waterfall. The entrance is about 50’ above the great pool below. The door here is thick oak, reinforced with iron bands and painted red and blue (the royal plumage of the Birdmen).”

That’s not a bad initial description. It even establishes some mythology with the red/blue stuff. We’ll give this paragraph MOSTLY a pass, since it’s really “the outside.”

“The door is locked. Inside the 15×20 foot room are 7 Goblin Guards and a Bird Shaman, called “The Sky Watch” by the other denizens. Normally they simply sit at tables playing dice or complaining. If alerted, one will climb the spindly winding stairs to the next levels to alert the garrison guard while the remaining six stand against the wall on either side of the door to ambush anyone who comes through while the Shaman casts darkness which covers the whole room.”

I’m gonna be an ass here. The locked door sentence belongs in the first paragraph. That describes the exterior and the lock is the exterior. In fact, that entire first paragraph could/should be a preamble before the keys start, but, whatever. Anyway, locked door goes OUTSIDE, where the information on outside is. Once INSIDE The room then you can start with those details.

Room dimensions in text are almost always bullshit. That’s what the map is for. Start strong, with the first thing. “7 goblin guard and a bird shamen dice & complain at a table. If alerted the Sky Watch will …” That’s direct. It’s targeted at play.

THEN comes the third paragraph …

“Each Goblin wears leather armor with a blue waterdrop symbol crudely painted on the chest, fights with a shortsword and a dagger and has 1d4 sp and 1d10 brilliantly colored bird feathers in a leather belt pouch. The Bird Shaman is covered head to toe in blue and red feathers. In addition to his spells, he wields the Staff of the Air (Stinking Cloud 2x/day, Predict Weather 3x/day, Air Blast 4x/day). Air Blast pushes an ogre sized volume of air (3’x5’x8’) at an extremely rapid speed, pushing up to 600 pounds of weight 4d6 feet (save for half distance). Air Blast does no damage.”

It is at this point I think the description is really off the rails. There’s really two things going on here. First is the description. Blue waterdrop and covered head to toe. Very nice, Probably belongs after the “complain at a table” since it’s something the party sees immediately. The leather/shortsword stuff, as well as the Staff of Air, probably belong in the monster stats, which is paragraph four, or even putting the staff in the magic item appendix, maybe with a page number reference. “Staff of Air (p44)”

This sort of muddling of information happens not only within room but between rooms as well. Information from one room is referenced in another, obliquely. “They will release their pet.” pet? What pet? Oh, that’s in a different keyed entry. A reference to that entry, “rm 7b”, would help immensely. This is pervasive throughout the adventure, even if it can be excused a bit in the Cliff Dwellings section because of the way the buildings kind of all run together.

This is a great multi-level dungeon. I just wish it were edited better for use at the table. It’s a hard sell to slog through things. Something like 15 adventures made my Best Of list in the last year. That’s more than one a month. Why would I suffer? It’s time like these I have No Regerts.

This is $4 at DriveThru. The preview is six pages. The last half shows the keys, with room on, the bird shamen, on page four. Check out those last three pages for a great example of what you’re getting. A great preview.https://www.drivethrurpg.com/product/240471/Blackfalls-Hall-The-Palace-of-the-King-Under-the-Water?affiliate_id=1892600

7 Responses to The Palace of the King Under the Water