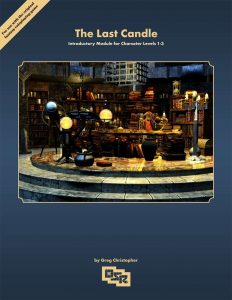 The Prieuré de Chaurillon lies isolated in the upper valley of the Satrebonne river. The empire that once protected it has fallen. Barbarian hordes now roam the land. Once tamed borderlands have become infested with monsters and foul beasts. The monks of the Prieuré are all that remain of their ancient order. They stand alone against the darkness of the age; The Last Candle of their faith.

This 37 page adventure details a small home base (?), the surrounding region (?) and a 64 room dungeon (?.) This is the real deal. All three parts have very strong content with interesting encounters and NPC’s that directly relate to a parties adventures without having a “hey dummy. Here is the adventure” label on them. It’s also padded to all fuck and back with loose language and an informal style that makes finding information a total pain in the ass. Bolding, terser writing, etc would have gone a long way to making this MUCH more usable at the table. You’re gonna need a highlighter. It might be worth it.

The home base centers around an abbey. It’s got a secretive and plotting, but good, head along with a famous library and knights/soldiers patrolling around it, as befitting the last religious site in a rough borderlands region. This allows for a variety of NPC’s and subplots to be brought in to play. The library needs something, you need access to the library, the head monk wants something from you, the peasants are available as plots or hirelings. There are folk who want in the library who you can hire, etc. The place feels like a natural part of the environment and the people in it feel like they should be there. And it’s all oriented towards actual play. The people described are the ones the party will interact with or want to interact with, like field worker who also fights in bare knuckle matches. There’s a hireling for you! He wants to go get some leather armor from father-in-law first though … those are the details that bring an NPC to life and this first third is full of those. There’s an armed band camped out, with the leader wanting to see the prior about his promised wife to be … who the prior has sent away to see a mage on the edge of the territory in order to protect her from the fiance. Human Drama! It’s got a lot of REALLY nice subplots (which the adventure terms “hooks”) that allow for a whole host of things to be going on while the party is “in town” and yet still be quite relevant to a current or future Thing To Do.

The local region has a decently extensive wandering monster table, and enough regional variety of woods, lowlands, hills, etc to provide variety, with some decent little details also. Like “this area was once home to farms and a lot of abandoned orchards attract monsters.” The creatures are doing things and there’s also twenty or so more in depth encounters for the DM to toss in when a wanderer is called for. They remind me a bit of the Wilderlands hex entries, expanded in to two or three paragraphs each. Things are going on and happening. They are full of potential energy. You discover a man lying on the ground in tattered clothes, covered in blood. Dude has a secret … he’s a werewolf! There’s a lot here to take advantage of. [As an aside, the wanderers would be strong if they also included an adjective/adverb. “A FRIENDLY troll roasting a halfling on a spit.”]

The dungeon is great also. A little over sixty rooms, laid out in a roughly “square surrounding an inner bailey” format, with rooms and little mini-corridor complexes scattered around the edges. It’s got a good mix of traps and monsters, NPC’s and monsters you can talk to, and little in media res things. A group of darkelves with their leader gravely injured, trapped in a room by a monster outside. Clearly, there are opportunities here for roleplay. Those opportunities are repeated over and over again. Roleplaying in the dungeon, little almost vignette scenes, without them being full on set-pieces.

And yet this is a full on highlighter adventure. There is little to no bolding, bullets, or indents to make finding information easier. Those great village NPC’s are spread out over three pages and have two to three paragraphs each. They need a one sentence bolded summary up top that says “Hireling: crude bare-knuckle boxing field-hand. The regional presentation is likewise … lazily described. As are the wilderness encounters. As are the dungeon entries. What you are most likely to see in a dungeon room is not necessarily the first few words/sentences. Mixed throughout a couple of paragraphs are obvious sensory information. The entries are cluttered with verbose advice and explanations.

Entire paragraphs are devoted to tactics of DM advice. Verbose. “They want to avoid a fight and are hungry for food/horses” and “they pick up things and drop them a height.” is great. It’s terse. But an entire paragraph saying that on the first round they will perform diving attacks. And that they target the largest pack animals. And they knock players out of saddles. And that they flutter around the ground on the second round. And on the third round they fly in to the air with anything they have. Man. Look, I get it. You can get there with a word or two juicy unridden pack animals and destroyed equipment.

This happens over and over again in the adventure. It uses a sentence when a word will do, and comes off dry because of that.

Still, all in all, great encounters. Encounter after encounter. Great NPC’s/village/starting region. Just in need of a major MAJOR edit.

This is $4 at DriveThru. The preview is six pages long. The last page is probably the closest to representing the spirit of the writing in the product. You can see how the entries can tend to the longish side of the spectrum. This page still kind of falls in to the General Overview section, and so its harder to see the issues and/or for them to stand out.https://www.drivethrurpg.com/product/117345/The-Last-Candle?affiliate_id=1892600

2 Responses to The Last Candle