(PF) The Forest of Starving Spirits 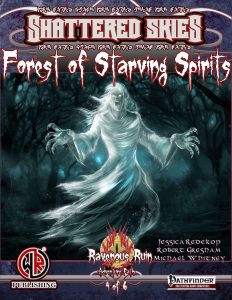 Explore the haunted remains of Endiel Forest, the forsaken kingdom of the gruesome ghastlord Mortalbane. Once a vibrant wildwood where the ancient elves lived in harmony with nature, what’s left of Endiel now is a shadow of its former glory, a rotten wilderness guarded jealously by an enigmatic horror known only as the Endiel Witch. Tread paths no mortal has walked in over a thousand years and uncover long-forgotten forgotten secrets in Forest of Starving Spirits, part four of the Ravenous Ruin adventure path.

This thirteen page adventure is a trip through a haunted forest. Part four of an adventure pah, it is barely coherent. Motivations, knowledge, challenges … they all have some of the most tenuous ties I’ve ever seen in an adventure. Another example of focusing on the style, artwork, layout, font, borders, instead of the substance of the text.

I like treading paths no one has walked for a thousand years … I am a failure as a father because my son now plays Pathfinder … because it’s what his friends play … and he said Oswalds adventure, while great, was something his friends could not handle. Fuck your system superiority complex; it’ all about market share.

Oops. I stumbled on to part 4 of an adventure path. Still … let’s judge the entire series by this one entry and also see if its useful as a standalone haunted forest.

The party wants the magic gobstopper and is told that The EVil One has it; you gotta go in to the haunted forest to find him and get it. The forest is 400 miles by 800 miles, with each square being 30 miles on the map. There’s some mountains on one side where The Evil One resides. I think. Well, I, the DM, know he’s there. It’s unclear if the party is supposed to know that before they go in. I guess not? I mean if they did, then why would they enter the forest at the far/opposite side, why not enter the forest at the square next to the mountains, keeping to the unhaunted grasslands AROUND the forest until then? So I guess the party doesn’t know he lives in the mountains? It’s VERY clear. Just like everything else in this adventure.

Remember that super big 400×800 mile forest? The one with the map? The map doesn’t have locations on it. The text of the adventure eventually tells us that the lost city is in I-4 and waterfall is in G-8, but that’s at the top of each entry, spread out through the entire adventure. So what the fucks the purpose of the map? I don’t know. The evil spirits in the forest get you lost and evli dryads lead you to danger … but the map doesn’t tell you where anything is.

There’s a stinking cloud above the forest, it makes flying above it hard. (I Guess it reaches outer space?) So you’re footslogging 30 mile hexes in a tangled forest. What is that, 8 miles a day or something in a bramble filled haunted forest? For every hour spent in the forest there’s a chance the evil witch shows up to fuck with the party. What is the chance? We’re not told. Just “there’s a chance.” Wandering monsters? No, no list. At all. There’s a couple of entries: Winding Woods (you get lost) and an Unnerving Presence that makes you have a -2 to WIll saves. Oh ,it also says that you an encounter a poison pit tap, four shambling mounds, four lacedon trolls, and a ghoul treant. In as many words. That’s literally a quote from the adventure to describe the encounters on your trek. Nothing else. That’s it. I’m not making this fucking up.

There are knowledge checks. “The forest is wild and overgrown.” Ok. They are all just as useless. They tell you nothing of consequence. It’s just trivia. Why the fuck do they exist if they are just trivia?

Grief builds inside of you, silence is deafening, and the writing is hackneyed. More to the word, the formatting is terrible. Recall how a modern bullet point system works in a word processor. If you indent then the text is offset to the right and the style of bullet point changes. This denotes this is a sub-item to the item above it. This allows for easy visual groupings of data and relationships to be immediately obvious. Yeah, this adventure don’t do that. Everything is at the same level, and appears in the same style. Is this a new monster? Is this a part of a different encounter? Who knows, because the formatting makes everything confusing as fuck. You know those monstrous long Pathfinder stat blocks … imagine three of them all in a row with something else FORMATTED THE EXACT SAME WAY appearing between two of them. There’s no way to tell where one things ends and another begins. I wouldn’t quite call it wall of text, but “confusing mass of text” is a relative of it, to be sure.

Oh, oh, in the crypt in the ruined city (again, why the fiuck are the party drawn there?) you finally battle the evil witch that has been harassing you. This time she flees to an estate. Uh. She has fled in every encounter. Is the party still chasing her? Why are they following her? Killing the witch isn’t a part of the adventure, getting the gobstopper is. It makes no fucking sense AT ALL.

Back to that total disconnect I mentioned earlier? I think this adventure falls in to the “throw some shit at the party” category of product. Here’s some shit, throw it at the party until bored. Make them have this encounter, and then this one. Lead them to this one. Just put them in the ruined city and tell them they see a crypt. (Aside: Roll to find the crypt, to trigger the witch encounter? That’s a roll to continue. What if they DON’T succeed in their roll? Nothing happens, ever? No, the DM fudges it. So why the fuck is it in the adventure?)

This is a bad adventure. It fails on the most basic points. Great encounters might be a part of my review standards, as might evocative writing, terse writing, useful to the DM at the table. One of the most fundamental points though, that I never mention because it’s NEVER an issue, is a goal. I don’t mean a hook, or some such. But communicating to the players what they need to do. This adventure doesn’t do that. Sure, I think the read-aloud is hackneyed, I see that in a lot of adventures. Terse and evocative? Meh, again, lots of examples of that. Useful to the DM at the table? Again, lots of product fail at that point. But to be so incoherent that no one at the table understands what is going on in the adventure? That’s a new one. I think. I’ll have to go reread my review of Golanda.

Giving the designer(s) the benefit of the doubt, I have to question the editing of this. What the fuck is the purpose of editing these days? Copy editing? Fact checking? It’s certainly not “point out basic things wrong”, which is much more important than an orc having an ac of 13 vs 14.

This is $4 at DriveThru. The preview is one of those mini things, so you can’t actually see what you are getting. Boo! I Boo I say! Still … on that last page? That’s two things you are looking at, nt one. See how everything is in “one line” green boxes? Yeah, no indent. Confusing as fuck. On the page before that, #3, that’s THREE things in that text on the left side column. Good fucking luck with that.https://www.drivethrurpg.com/product/242806/Forest-of-Starving-Spirits?affiliate_id=1892600

Oh, and one more thing. A Poison pit trap is CR13 in Pathfinder. Ouch.

14 Responses to (PF) The Forest of Starving Spirits