The Shrine of Fallen Angels 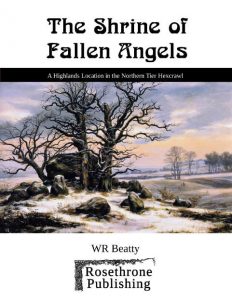 The faithful will sometimes make a pilgrimage to pray at the Shrine of the Fallen Angels. Legends tell of angelic visitations and miracles. Certainly there is more to this shrine than simply a place for pilgrims to pay homage to a long forgotten saint.

This nineteen page adventure details a 20-ish room shrine/tomb of a local saint. It’s got a great OD&D vibe but suffers from formatting issues that lead to a wall of text. It could also be a disaster for the party, scale-wise. The content is ok, but I expect more from formatting/usability in 2018.

I dig an OD&D vibe. By that, I mean a style of encounter that doesn’t seem a derigour as conventional encounters. It’s not that the encounters are all that different, deep down, but they seem more natural. Each encounter must, eventually, debase itself in to providing mechanics, but it seems like OD&D-style encounters tend to do that much later in the designers thought process, and with less devotion to standard mechanics. It’s as if someone sat down and thought about what a hermit pilgrim, for example, might be and imagined it in their head and then wrote it down. Then, at some point, with almost no preconceived notions, noted mechanics for it.

There is a freshness that comes from these, and they seem effortlessly natural to the location than a lot of other writing styles have.

The wandering table is a great one, for example, because of this. Note this one: “A grave digger carrying the ashes of the Lord of the Valley. He is supposed to bury them at the shrine, but he is worried about his sick wife at home.” There’s so much embedded in that description. Most notably, it gives the grave digger some reason to interact with the party and to drive some potential action. And such it is with almost all of the wandering encounters. They contain a kind of potential energy,

But, it is also these wandering monsters that the first hints of issues are encountered. Some of them can be quite long. FUll of flavor? Absolutly. An owlbear with maximum hit points referred to by the locals as The Grey Bear with a hideously deformed left paw … which causes him to not hug and fall over if he hits of max damage? A minor demon (his patron) and a ghost show up on the encounter tables if you kill him? That’s some serious fucking chrome right there. It’s not just all in the owlbears favor, with a hit bonus, but has a natural vibe with the no hugs and falling over. It also takes a lot of text to get there.

That text journey is the adventures major problem. It’s long. There’s not much formatting with whitespace or even bolding. THis lends to a wall of text property that is quite hard to dig through during play at the table. Details are hidden in the middle of paragraphs that you would want to know or call out during play. It’s almost feels like a stream of consciousness writing style with no pauses to take a breath. There is a lot of richness and depth, but it can be conveyed better with a little bolding and whitespace.

Old school can design without an appeal to scaling and that’s done here … perhaps too much. Some creatures have 1d3 HP and others are 10hd or 60hp. Further, defiling the tomb has some SERIOUSLY bad consequences and it’s not clear to me that any warning of that is present. Looting abandoned places is what parties do … but in this case it can EASILY trigger a massive retaliation that even higher level parties would be hard pressed to live through.

So while the adventure has a very natural vibe to it, and is rich in gameable detail, it also hides that in a way that better editing could have solved. The disproportionate response to defiling is a little out of place also.. It may be a personal style thing; if you know your DM runs games like that then its ok. But if you’ve been defiling places with little godly consequences and then out of nowhere get TPK’d, well, the party might justly note a bait and switch.

This is interesting the way MERP products are interesting. But I’m seriously not convinced of its usability.

5 Responses to The Shrine of Fallen Angels