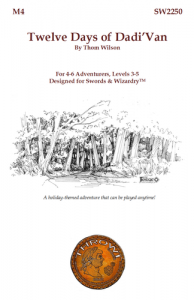 Dwarves from the village of Whundarn have a serious problem: they have been unable to produce female children for several years. An ancient and strange affliction has returned to the remote mining town after several dozen generations. The town’s Keeper of the Lore has recently discovered the solution to the fertility dilemma, but townsfolk are unable to obtain the necessary ingredients to make the needed elixir. They need champions to attempt the dangerous mission on their behalf, but who will answer the call in time?

This 32 page adventure describes a magical island in a state of winter. CHaracters navigate an evergreen maze and tunnels inside a mountain at its center in order to pick berries from a tree at the top. Page long room descriptions are supplemented by “kill the monster and move on” challenges. It’s also not clear to me at all that the adventure can be completed successfully due to time constraints.

The dwarves, mentioned in the intro, have found a clue in a book. They need three berries that grow on a magic island that appears in the bay once a year for twelve days before disappearing again. That’s all they know. The island appears in three days time. Once on the island the party is met by various winter-themed foes. The main features are an evergreen maze that surrounds a mountain at its center, a mountain full of tunnels/rooms that leads to the summit where the tree is found.

I got a lot of issues with this. Dude that lives on the island automatically knows when you arrive and sends his creatures after you. This is, IMO, a symptom of “D&D is combat. Every encounter should be combat.” I’m sure we’ve all encountered people who think like this. That’s not the D&D I know and love.

The characters are also gimped bu fly, hover, levitate, ad float like spells not working. Because you have to complete the adventure the way the designer wants you to, not through creativity. If you could fly then you’d just zoom to the top and get the berries, cutting out everything in between. This is a sign of a poorly written adventure. Generally, the level is too high is you’re worried about that kind of stuff; write it for a lower level party or change the adventure. Gimping the party is almost never the answer.

I think, though, the biggest issue is the difficulty. You go to the island only knowing about needing the berries. Time on the island is accelerated, meaning that one day on the island is twelve outside of it, leaving the party one day to complete the adventure … and they don’t know that. That’s bad. Without knowing that the party will fail. I mean, they will make decisions that they would NOT make if they knew the actual consequences. Oh, you camp to regain spells? Fail. Without knowing the rules they can’t make meaningful decisions and without meaningful decisions they can’t decide to push their luck and/or fun ensues.

Beyond this, they can’t just pick the berries. If they do then the berries will wither and die. They need special gloves to pick them with. But they don’t know that. And if they do get the gloves then the berries will still rot because they need a special bag to transport them in, that they don’t know about. And they can’t even get in to the mountain without a special key, that they don’t know exists. And they have a day. And the place if stuffed full of monsters. Essentially the party is going to have to COMPLETELY explore the evergreen maze and the tunnels to get everything, which means encountering nearly every creature. In S&W. In one day.

There ARE some rumors that could be learned in dwarf town, and there’s a fairy that might be friendly, in the maze, but its not certain AT ALL that these will be paths that generate the info the party needs. Certainly not the rumors.

Oh, and the dwarf village is inaccessible in winter, but the island appears in mid-winter. Then how do you get to the village to pick up the adventure? And I haven’t even touched on the page long location descriptions.

It does have a nice non-standard magic item or two, with very OD&D vibes to them. And it does have an encounter or two that are nice, like the battle scene between giant squirrels and evil trees. But that’s not enough. Not nearly enough.

This is $2.50 at DriveThru. The preview is only three pages long and shows you nothing of meaning to help you make a purchasing decision.https://www.drivethrurpg.com/product/239051/Twelve-Days-of-DadiVan–SW2250?affiliate_id=1892600

7 Responses to Twelve Days of Dadi’Van