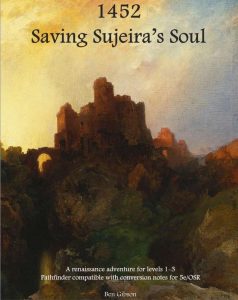 It is the year of our Lord 1452; the world is changing. But here in Village Sujeira, time seems to have stopped. From misty sunrise to dusty sunset, the ebb and flow of life remains the same. Although the animated gossiping of the women seems a little tense today. And are there perhaps a few more dirty travelers upon their burros than normal? And here is Father Olavo…does the prelate look a bit shifty?

This 20-page adventure is a collection of sites and regions connected together though events in the background. It has a pseudo-historical Portugal setting, which is easily ignored. The church, and the threat of the inquisition, is the only real connection to the setting. It’s got some good things going on with terse wanderers and NPC’s, and presents a lot of areas with a small page count, but it also has some readability issues and the connections between areas aren’t quite as strong as previous entries by the designer.

The set up is easy: the local wise woman has gone missing and the local priest, a friend of hers, is worried because the inquisition is in the area. Unknown to all, an embittered villager has returned, having sold her soul to infernal powers for magic, and kidnapped her, intending to seal the deal for more power with no just her but the rest of villagers also. While looking for the wise woman the party stumbles upon a mercenary looking for the three parts of a holy relic. Which then intersects again with the embittered woman/missing wise woman once again.

The locations in this, the village, the local church, an old tower and the swamp (as well as an inverse of the swamp) are all covered in a two-pager format. Tersly written, the format generally works well. It’s just the information you need to run the adventure, the focus on ADVENTURE instead of boring trivia. The NPC’s descriptions are just a collection of two of three words: chatty, excitable, joyful, or sincere, fretful, cautious. It works well for communicate an NPC vibe to the DM. Likewise the wandering tables all have the creatures doing something which adds to the encounter. Great writing.

The maps can be hard to read at times; it’s the old wound of “fancy fonts”, which almost always come at the expense of readability. There’s also something weird about text fonts used, or rendering engine or something … the BOLD text seems to run in to the non-bold lessening the impact of it.

More importantly, I’ve been through the adventure a couple of times and I’m having trouble following certain parts of it. Recovering the parts of a relic, the thing the mercenary is after, gives you access to Limbo to Stop the Plot, Recover the Wise Woman, Findt the evil woman, etc. And yet … I can’t figure this part out. The NEED for the relic, or the party learning that, seems to not be called out anywhere? In other words, there’s not really any chance for the party to learn they need it. Or that there’s a bigger plot going on. I can’t find these parts of the adventure … which means that either they exist and I can’t find them (bad) or they don’t exist and/or are implied …. which is also bad. It doesn’t seem like there’s any way for the party to discern the location of the reclis, or know they need them in the first place. That would be the major adventure malfunction.

For it’s minimal nature, I like the setting and think it adds a lot. Rural portugal, poor priests, the inquisition … just those words I types adds a lot of context for the DM to orient their imaginations and add to things. Like I said, there’s not a lot of conflicting setting detail that would keep this from being a “normal” low fantasy world, beyond a church and a inquisition. Ad doesn’t every campaign need an inquisition at some point?