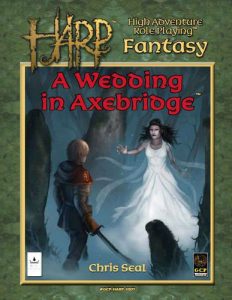 The lands around Axebridge are renowned for strange happenings. Unbeknown to the inhabitants, these occurrences happen because Axebridge is situated close to a place of great magical power, which was once the site of a great druidic temple. In more recent times, fey creatures have been drawn to the nexus. With the inevitable contact between fey and mortal, old wounds have been reopened. When a jealous admirer is thrown into the mix, the village of Axebridge finds itself under threat, and hope for the village’s future lies in the hands of a few bold souls marked by fate.

This 48 page adventure is a simplistic linear “investigation” followed by an old underground druid temple. It has some some fairytale influence and great undead monster imagery. The map is shit, the village lifeless, and it has column long read-alouds and massive amounts of DM text for what should be simple entries … hiding information that the DM needs.

HARP is, I believe, a simplified version of MERP, which is in turn a simplified version of Rolemaster. Normal people were introduced to MERP through the EXCELLENT middle earth regional supplements and to Rolemaster through the greatest critical hit charts ever .. at least prior to DCC. I can’t really review the system specific info, but the adventure here should be easy to review, at least in the context of stealing it for your D&D like game. It starts with you being invited to a wedding.

And as good adventurers you should immediately decline and get as far away from the area as possible. Nothing good ever comes from an invitation. At best you accept it under the social convention that “were playing D&D tonight,” but you know there’s a set up coming. Far better to just burn down any place you are invited in to. The real XP is in the Keep, not on the Borderlands. Also, but only tangentially related, if your DM ever says the word “mists” then you are in Ravenloft and should pull out the holy symbols/water/etc immediately. Anyway, I doubt there any n00bs reading this that need that advice.

More interesting than the invitation there is a Witchhunter hook. The region only recently gaining enlightenment, the local priest as written for help with a local witch and the party are sent to look in to things. While I’m wary of “assignment” hooks, witch hunting IS a fun one … and one of the NPC’s with info is the local wise woman in question. Her and the priest hate each other, and they both have a piece of the puzzle plaguing the village. This is the ONLY interesting dynamic in the adventure and it’s also barely mentioned.

Instead we get a lot of read-aloud in the vein of “Contests of skill and accuracy elicit supportive cheers from those watching …” and “The golden sunrise gilds the buildings of the village …” Just bullshit generalized and flowery text. Paragraphs and paragraphs of it. Columns full of it. You get three sentences before the players stop caring. No one cares about your golden sunrise. The text is generic, ala the “contexts of skill and accuracy …” line, above. The mass of text hides important things. In one part a fey drops a doll which is VERY easy to miss since its in a giants text block. Bolding, terser text, better formatting. All of these are needed.

Instead of focusing the amateur novel writing, the text could have focused on the village NPC’s. The priest and wise woman get a couple of sentences about hating each other, scattered throughout the text, but most of the NPC’s (the four or five mentioned) comes off as flat and dull. Some of the first people you meet are the couple about to be wed and they get no personality at all. Just some generic “hello, how are you” stuff. That’s crap. Given the importance of the village, it needs more NPC’s, written shorter, but with better personalities to hang out DM hat on. Kudos, though, for naming the hothead forester Bryce. 🙂

There’s some decent telegraphing going on. An apprentice priests watches the bride to be with sharp vision. He’s a hangly and homely. He has an unexplained cut on his hand that won’t heal by normal magic and he’s nervous and obviously lying to explain. For some reason, beating the answer out of his isn’t really offered as guidance to the DM, even though it’s the obvious correct investigation avenue to pursue.

This has some great fey stuff in it, but which I mean it seems heavily folklore based. A fey creature sits on the brides chest at night and steals her breathe. A sidhe is silent and aloof and vengeful. A wooden doll is a fetish. This is the kind of folklore and fey based stuff that I really enjoy … those elements related to old myths and legends and turnip princesses. At one point the wise woman send you out to find “elf stones”, river rocks with a hole in them. It turns out they let your nonmagical stuff hit undead only hit by magic items. The old religion redefined, Andrew.

The shitty imagery in the read-aloud stands in contrast to the way the undead are treated, in particular. Buried in their text are one or two really great sentences that make them horrific. It reminds me a lot of how Fallen Jarls treated undead. A woman, stabbed through the chest, wearing a white gown stained with blood, is actually a ghost. Some bones and bits of fur pull themselves together to form a dog-like skeleton. It’s not a ghost,or a skeleton dog, but they are more individualistic and thus more terrifying and mysterious. Good job!

But … too much text for what it is. It’s decent enough, at its core, although simplistic. It’s just BURIED In text.

This is $5 at DriveThru. The preview doesn’t work. https://www.drivethrurpg.com/product/221624/HARP-A-Wedding-in-Axebridge?affiliate_id=1892600