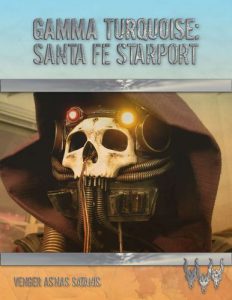 This 34 page “adventure” is actually a regional setting with a few event ideas. On a ruined earth the starport in Santa Fe still exists,hence the post-apoc and Alpha Blue/spaceships crossover. It’s got the jr high sex stuff that is becoming synonymous with Vengers style.

I love Gamma World. It’s my favorite child. I have a framed poster of the Warden hanging proudly in my dining room. I wear my Warden command bracelet every day to work. Every Christmas I ask for more post-apoc/generation ship fiction. I STILL think I remember a Tv version of Orphans of the Sky, even though I can find no google hint of it/Universe.

This setting is about 50 years after the disaster. Nukes, radiation, cthulhu monsters, it’s all in here. New Albuquerque is a mutant hanting function city that embraces aliens. Miles to the south, through the wasteland, is the Santa Fe Starport, a working starport. In between are gangs (theming ala The Warriors), warring robot factions, Wizard towers, and a sunken Statue of Liberty. (Because Venger.)

There’s not really an adventure here. The major parts of the region are described each in a paragraph or two. There are a few more words for New Albuquerque and also the starport. There are some events/plots mentioned in the starport, like a sex android revolution, security checkpoints, violent candy, and a “Deal” for smuggling turquoise.

A cult leader, skull face, is referenced several times in the supplement. There’s one throw-away line in the adventure about him launching an assault on the starport.

There’s a gamma world-ish random loot table. I love those things. There’s also a mutant power table in which almost every power involves bodily fluids and sex organs. (I think it’s clear by now that I’m from the midwest, and a bit of the ultra-violence is ok but not boobies.) There’s a strong sex/sleaze theme, which I assume comes from its Alpha Blue heritage.

It’s not an adventure. At best it’s a regional setting with a bunch of ideas that you could use to string a couple of adventure ideas together and add some complications from some other details.

But it’s missing a strong Adventure element, and thus it goes in to my “regional setting with some things to do” category rather than my “adventure in a region” category. Too generalized for my tastes.

This is $6.66 (because Venger … can one roll one’s eyes AND appreciate the devotion to the theme?) at DriveThru. The preview is six pages. You can see the loot table (with entry number one being the required stop sign shield) and the last page being the mutation table that focuses on sex organs.https://www.drivethrurpg.com/product/227000/Gamma-Turquoise-Santa-Fe-Starport?affiliate_id=1892600